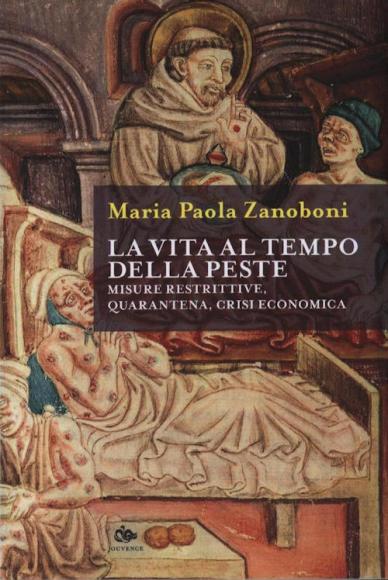 The author, professor of medieval economic history, takes us, with this essay, on a journey into the world of the plague, starting with Thucydides, who was the first to describe it by narrating the Peloponnesian war (431 - 430 BC) between Athens and Sparta. Lucretius and Tacitus also spoke of it. The latter described the epidemic that broke out in Rome in 66 AD "The plague epidemics repeated themselves periodically until the mid-eighth century AD"

The Mole Adriana, in Rome, was renamed Castel Sant'Angelo after the Pope saw on its top, during a procession, the archangel Michael, who was credited with the miraculous salvation from the epidemic that struck the city in 590 AD. "Later the disease disappeared from Europe to reappear between 1347 and 1348." It was brought to Messina, in 1347, by a fleet of galleys fleeing from Caffa, a Genoese colony in Crimea, where the plague had spread in 1346/47. And from Sicily, in three years, it spread throughout the Old Continent, where it remained until the eighteenth century.

Boccaccio begins his Decameron with the story of the plague of 1348, describing its psychological effects. "Respect for human and divine laws fell away, everyone began to consider lawful what they liked most." Who closed himself in the house, who gave himself to the wildest excesses. "The sense of modesty and decorum in funeral rites failed, many died alone without being mourned by anyone."

The economy, throughout Europe, received, with the plague, the coup de grace, as many businesses closed down. In addition, there was a drastic demographic decline which led to the reduction of manpower. All this caused a decline in manufacturing production and a decrease in trade. The government tried to cope with the situation by favoring immigration to compensate for the demographic decline and by imposing new taxes to compensate for the extraordinary expenses incurred. Due to the decline in available manpower across Europe, wages increased, although governments tried to stem the phenomenon with legislative interventions.

“The remedies against the disease were almost non-existent, and useless, if not even harmful. […] 70/80% of those who had contracted the disease died within 4-7 days. In the cities, between 25 and 40% of the population generally perished. " The preventive measures, decided by the public authority in the city government, consisted in the prohibition of the movement of people and goods to and from infected cities, in the closure of taverns and commercial activities (except food sales and pharmacies), in the closure of schools, in the obligation to stay at home for anyone, in the prohibition to participate in funerals and religious celebrations, up to the quarantine, introduced for the first time in 1377 in the Dalmatian city of Ragusa.

The quarantine “It provided for the refusal of access to the port to ships coming from plague areas, with the obligation to stay off the city for a month. [...] An armed ship patrolled the coasts to avoid unauthorized landings. " From the middle of the 400th century some places were built where only the plague sufferers were locked up: the Lazzaretti. The first was built in 1423 in Venice. In any case, diagnosing the plague represented a considerable responsibility, both for the hostility of the population who feared the quarantine and the lazarets, and for "The economic and commercial interests that were upset already at the first signs of an epidemic." Therefore, at times, doctors remained generic in their diagnoses, in order not to incur the violent reaction of the population who, for the most part, had decidedly hostile behavior, if not open rebellion, in the face of measures to prevent or stem the infection. Therefore the authorities, in some cities such as Milan and Palermo, raised numerous forks at various points, "To make the mandatory obligation for everyone to stay at home more convincing." Some death sentences were carried out in Genoa.

In the Middle Ages the hospital, initially, was not an institution aimed at the care of the sick, but a place mainly intended for hospitality. "Its main function consisted in welcoming pilgrims, the poor and vagabonds. [...] The sick were not welcomed there as such, but because it was often the state of illness that determined that of need, and therefore the need for be welcomed and cared for. Illness represented only one aspect of poverty. The strictly therapeutic moment therefore did not play a decisive role in medieval hospitals, whose primary purpose was to provide guests with food, lodging and spiritual assistance. " The figure of the doctor as a profession, on the other hand, began to develop in the thirteenth century when, in universities, medical doctrines began to be taught, which were a mixture of philosophy and dialectics, while "The empirical experience was devalued as a manual and mechanical art, and entrusted to surgeons." The humblest practices (bloodletting, tooth extractions, leech applications, the simplest wound care) were left to the barbers, "Who often represented the only health workers in the countryside and villages." Another important figure was that of the apothecary who "Alongside the culture and technical experience in the preparation of drugs, the knowledge of equally complex trading practices."

In conclusion, "It is incredible to see how, despite the extraordinary progress of medical disciplines, the tools available today for the prevention of epidemics are still those developed in the 300th century starting from the north of the Peninsula, received late by the rest of Europe, and with success until 1720, when the last sanitary cordon against the plague in Marseille almost completely eradicated the disease from the Old Continent. "

Giampiero Cannella Ed. Historica 2021 pp. 159 In recent years, especially among insiders, there has been debate ...
599
Read

Riccardo Lancioni Ed. Chillemi pp. 112 The Yom Kippur War was a highly technological conflict, in which the ...
959
Read