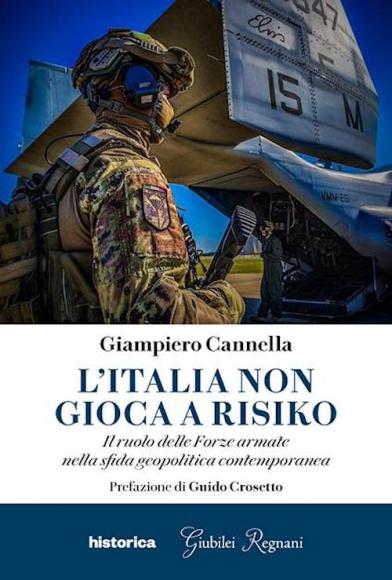 In recent years, especially among insiders, there is much debate about what the role of our Armed Forces should be. It is useless to hide the fact that too often they have been seen, first and foremost by the political class, as something necessary but badly tolerated. During Conte 1 we witnessed a minister who, participating in a talkshow, boasted that he had managed to cut half a million euros from Defense funds, but then, a few months later, announced in a press conference, together with the then Minister of Defense, spending over 7 billion on armaments.

Then let's leave aside the declaration of Giuseppi (e) Conte, when he was still president of the council of ministers, regarding the "5 guns removed from the Army".

The book by Giampiero Cannella, journalist and politician, has the merit of "turning on a light" on the missions of our military abroad.

Operations that are often criticized, even with good reason, because perhaps their strategic return is not understood (see for example Afghanistan). Others that instead should be at the center of our interests and instead are ignored by politics.

In Cannella's work, not only are all the missions that see our soldiers as protagonists listed, but a strategic framework is outlined towards which the Mediterranean basin is heading and that Italy insists on ignoring.

Indeed, regional powers, such as Turkey, Egypt and Algeria, are increasingly gaining ground thanks to the use of their military forces. Especially the Turks, who pursue an unscrupulous foreign policy as well as a controlled exercise of military force, are establishing themselves as the main players in the Mediterranean.

In other words, Italian politics has abandoned any desire to affirm national strategic interests. Instead, preferring a kind of soft of dubious effectiveness. At the same time, however, spending little and badly for the Defense sector.

It is therefore useless to launch a pseudo aircraft carrier, the Cavour, when we could embark very few F-35Bs (at most 8/9 cars). Also able to take off - thanks to ski jump of 12 ° - only with very little war load. Or bring state-of-the-art conventional submarines into service, such as the U-212 NFS, and then arm them only with torpedoes. The class boats Kilo Algerians are capable of launching Russian land-attack missiles Kalibr, despite being technologically inferior.

As Cinella rightly writes, Italy should look to the "Enlarged" Mediterranean. The anti-piracy operations in the Gulf of Guinea and Aden bear witness to its interest. However, our activities are limited to driving away the attackers, shooting with small arms, tens of meters from the target while the web is full of videos of American, Russian and other national units annihilating the attackers. But the concept of an "enlarged" Mediterranean also includes the Sahel region. Perhaps our strategic interest is precisely in that area of ​​Africa, on the border between Niger and Libya where the main flows of migrants pass. From this year a MEDEVAC component (Role 1) is part of the Task Force Takuba, a French-led mission - aimed at combating jihadism in the region - which includes special forces assets from some European countries (Sweden, Estonia, Belgium, Greece, Denmark, Germany, the Netherlands, Portugal). Initially, Rome was also supposed to provide a substantial special component, but the French refused, asking us only to provide rotary wing assets (they probably did not want to grant us operational autonomy). However the negotiations are still underway, it cannot be excluded that in the near future the Italian military will be strongly committed against the jihadist militias in the Sahel.

Jacopo Gualario Ed. Youcanprint, 2022 pp. 118 From the covid-19 pandemic crisis to the most recent armed conflict between ...
303
Read

Marco Rottigni, Andrea Danesi Visconti Published by the authors pages 224 The decadent world of the near future, a famous ...
514
Read

Riccardo Lancioni Ed. Chillemi pp. 112 The Yom Kippur War was a highly technological conflict, in which the ...
1025
Read