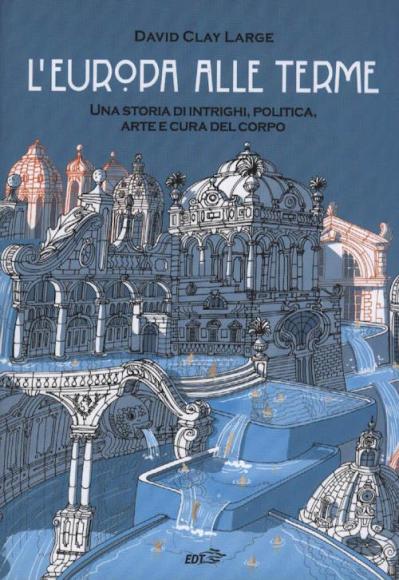 "If someone asked us point-blank what was the liquid held in the highest esteem in the Greek-Roman era, many of us would probably answer wine, but it would be a serious mistake: in fact, water was the fluid that made classical civilizations move Westerners. " Thus the author, professor of European History at the University of San Francisco and the Institute of European Studies of Berkeley, introduces us to this journey through the spas through the centuries.

Both the Greeks and, especially the Romans, used water and baths as therapeutic agents. Indeed, "If the Greeks were the silent precursors of modern thermal practices, the Romans have noisily brought the culture of hydrotherapy to its apogee in the ancient world."

While in Greece the baths were the prerogative of wealthy and exclusively male customers, the large Roman public baths, as they were free, were frequented by all social classes, therefore also by the poor and slaves. And women also had access to the baths. "The Baths of Caracalla represented the greatest example of a thermal complex of the imperial era in Rome." That of Baiae, in the Gulf of Naples, on the other hand, was the most famous hydrotherapy station in Italy. And as the Romans brought the culture of baths to the conquered territories, spas sprang up all over Europe: Aix-les-Bains and Vichy in France, Baden in Switzerland, Baden-Baden and Wiesbaden in Germany and Bath in England.

The baths followed the decline of the Roman Empire and then returned to vogue thanks to the Grand Tours on the continent. "The typical Grand Tour, whose golden period goes from the end of the XNUMXth century to the French Revolution, represented an instructive rite of passage for the privileged who were lucky enough to undertake it." At the time the "tourist" belonged to a high social class, had a certain cultural background and was mainly English.

One of the main spa resorts in Europe was and still is Baden - Baden, which owes its initial fortune to the French Revolution. This, in fact, caused, towards the German town, an emigration of the French nobility who, there, organized themselves by creating elegant lines of jewelry, refined perfumes and soaps, and intoxicating liqueurs, that is to say luxury products that decreed its success. Then there was the music. "Although from the beginning of the XNUMXth century to the First World War all the great Kurortas in Central Europe could boast a lively music scene, it was certainly Baden-Baden in this area, as in many others, that had the supremacy." Liszt, Berlioz, Brahms contributed to making Baden-Baden one of the European capitals of music. In addition to dancing and concerts, gambling also came. Great frequenters of the gambling halls, especially the tables of the rolette, were the Russian travelers. The first Russian writer to go to Baden - Baden was Gogol. Then it was Turgenev's turn, who set his novel "Smoke" there. But to reach Baden - Baden, above all for gambling, were two avid gamblers: Tolstoy and Dostoevsky. The latter, to the vice of gambling, dedicated his novel "The player" - which he had initially titled "Rulettenburg" - for which he found mainly inspiration, however, in Weisbaden. Goethe, on the other hand, preferred Karlsbad, Tepliz and Marienbad, spa towns in Bohemia. In Tepliz, in particular, the meeting between Goethe and Beethoven took place in 1812. Both of them frequented the baths regularly, even if Beethoven “He didn't do it for flirting with ladies or for gambling: he hated dancing and apparently couldn't tell one card from another. No, he went to the spa hoping to alleviate his many ailments. "

The spas, especially the German ones, were also the site of diplomatic meetings, peace negotiations and other political intrigues at the highest level. In 1879, in Bad Gastein, the Double Alliance was sanctioned between Germany and Austria - Hungary - thanks to Bismarck and Andrassy, ​​representatives of the two nations, which, in 1882, became, with the addition of Italy and the arrival , in Bad Gastein, also by Francesco Crispi, the Triple Alliance.

In Bad Ischl, Francesco Giuseppe met his future wife, Princess Sissi in 1853. "The three or four decades that preceded the First World War - the years in which the end of the siècle slipped without trauma into the Belle Epoque - represent the real golden age of the great Central European spa towns." And, between the end of the 28th and the beginning of the 1914th century, one of the main characteristics of the great Central European spas was the considerable increase in the Jewish presence which provoked initial episodes of anti-Semitism. But the heyday of the baths was coming to an end. With the outbreak of the First World War, in fact, a sharp decline began for them from which they would never recover. On June XNUMX, XNUMX, when Crown Prince Francesco Ferdinando was assassinated in Sarajevo, his uncle Francesco Giuseppe was in his villa, at the Bad Ischl spa which became, for the following three weeks, the seat of "Secret meetings between the emperor and his advisers to decide the sanctions to be imposed on Belgrade." And it was in his villa in Bad Ischl that Emperor Franz Joseph, on the morning of July 28, signed the declaration of war against Serbia.

With the war and the consequent departure of young people, the spa industry began to lack manpower. Everything started running out. "The war devoured raw materials and money with the same greed with which it devoured the flesh of young people." The empty beds of the clinics, sanatoriums and hotels were occupied by wounded soldiers and their families.

"The First World War and the Great Depression had impoverished the Kurortas, but it was only with the creation of the Third Reich that they experienced a period of brutalization and degeneration of the moral principles for which they were largely responsible." Hitler was not a lover of spas, unlike Himmler, Goebbels and Göring who, instead, frequented them. Davos, Switzerland, was the foreign destination of choice for wealthy Nazis. Baden - Baden, in the early years of the Reich, was declared a "neutral zone", a status "Which allowed the city both to welcome foreigners of all kinds and, an essential corollary, to avoid racist discrimination at the municipal level." This privileged situation lasted until the 1936 Olympics. After that "Anti-Jewish policies resumed with a great deal of vigor, and in this second and more intense wave of persecutions Baden - Baden was embroiled in full horror." With the Second World War the spas returned to host the wounded.

Immediately after the end of the war the main spa towns were occupied by the allied forces. IS "Like the battered European, the great Central European spas made a comeback, at least to some extent, starting in the XNUMXs and XNUMXs."