Home Recommended Reviews Antonio Leggiero: Luck was lacking, not the ... 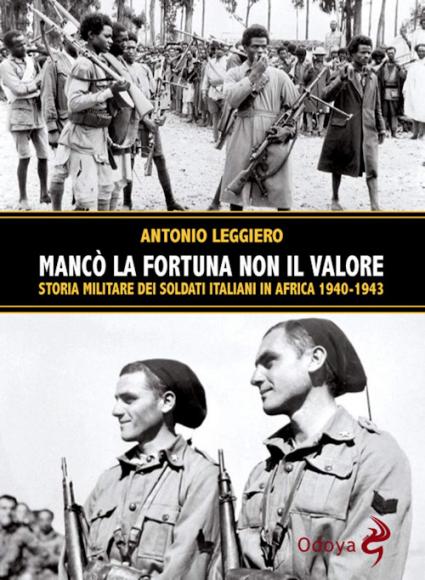 The author, investigative and forensic criminologist as well as professor of criminology in several masters, describes, in this very detailed essay, the bloody battles fought by our soldiers, during the Second World War, in one of the worst geographical contexts that exist on our planet: that of the torrid African deserts, where, once the conflict began, war was inevitable, since on the "fourth shore" we had our empire, our colonies, our possessions […]. And it was precisely in Africa that tactical and strategic errors began. Operations in North Africa, in fact, were always linked to logistical support - in terms of men, means, food, armaments and gasoline - based on convoys organized by the Royal Navy which, however, would have suffered some enormous structural and functional deficits, such as the lack of aircraft carriers, lack of coordination with the Air Force, and lack of radar on naval units.

At the time of the declaration of war, the equilibrium on paper tends towards a clear Italian superiority. The problem, however, is armaments. While the enemy can rely on fast armored cars and jeeps to move around the desert, the Italians are forced to use donkeys and camels.

The British air fleet is made up of the Spitfire fighters, the Italian one the extremely slow CR42 biplanes. The governor of Libya, Italo Balbo, however, has clear ideas about what is needed for an advance in the desert and asks, in Rome, 7.000 trucks: in response he is ordered to advance with the native donkeys. On June 28, 1940, returning from a patrol tour with his S79, Balbo was shot down by the Italian anti-aircraft. His death will be a severe blow for Italy. In his place will be appointed Rodolfo Graziani: sixty years old, irascible, very slow in action and not very enterprising. He does not have the qualities of Balbo.

In early January 1941 the British, under the command of General O'Connor, attacked, conquering Tobruk and Bardia. For Graziani it is a real defeat. On paper, the Italians, in numbers, are favorites, but our army is devoid of everything. More, our generals, with a few rare exceptions, are mediocre and often at odds with each other. Graziani is recalled to his homeland.

Meanwhile, Hitler realizes that without his help the Italians will be defeated definitively, so he sends General Erwin Rommel to Africa, together with a special body, the Afrika Korps. Rommel is full of himself and has a superiority complex towards everyone: he is a true narcissist. He is one who, however, knows his stuff. But he has no esteem for the Italians who, instead, will stand out for countless acts of heroism, such as that of Giarabub, where a small number of Italian soldiers, commanded by Major Salvatore Castagna, without supplies of any kind, will stand up to the British by capitulating - after 4 months of resistance under an infernal heat - March 23, 1941.

While the Italians are sacrificing themselves in Giarabub, thousands of kilometers further south, the Abyssinian empire is taking its last breath. The supreme commander of the Italian forces in East Africa is the viceroy of Ethiopia, general Amedeo di Savoia - Aosta, son of the legendary Duke of Aosta. However, despite his undoubted abilities, he too suffers from a shortage of supplies and is also aware that he will not be able to count on the slightest help from the motherland. However, on 19 August 1940, he will succeed in conquering Somalinand, English Somalia. But it will be a Pyrrhic victory. After the battle of Cheren, in fact, where our soldiers, despite the defeat (which arrived after 56 days, on March 27, 1941), write one of the most glorious pages of the entire Second World War, the British are rampant in Eritrea. The capital of the empire, Addis Ababa, will be conquered on April 5. Amedeo d'Aosta will attempt a last, symbolic and desperate defense on the Amba Alagi. Rommel, on the other hand, in North Africa, for his part, begins to use his tricks such as those of tying shrubs and cacti behind his means to increase the amount of dust and give the impression of being many more than one is.

The Italians, who had never seen a general on the front line share hardship, inconvenience, risks and dangers with them, highly esteem him. An estimate, however, most of the time, not reciprocated by the general who, however, will greatly appreciate some departments, such as the armored division Ram and Damers, the latter commanded by Major Paolo Caccia Dominioni.

The “desert fox” - as Rommel is defined - after several successes conquers Tobruk. The British decide to change the pivot of their defense line, choosing El Alamein. The advance of the Axis troops in North Africa seems unstoppable. Rommel wants to get to Cairo, but makes a fatal mistake: in his frenzied race in the desert he strays too far from his supply bases. The British and their allies, on the other hand, have continuous supplies. On June 30, 1942, in El Alamein, the British, under the command of General Auchinleck, have the upper hand, forcing Rommel to postpone the dream of conquering Alexandria in Egypt.

On 20 July, a new division arrives in Africa from Italy, that of Hunters of Africa which, a few days later, will take the name of thunderbolt. The division represents the flower of Italian youth and of Littorio. The British, however, thanks to Ultra, the powerful British decryption service, are able to anticipate the moves of the Axis soldiers. On October 23, 1942, at 21:40 pm, the attack of the British 8th Army began, under the command of General Montgomery.

El Alamein will be above all a battle of armored vehicles, where the infantrymen have to die writes Alfio Caruso. 21:40 pm to 21:45 pm is a real apocalypse. Both the thousand mouths of the cannons from the ground and the planes from the sky vomit fire. There will be numerous acts of heroism by the Italian soldiers, there will be numerous medals for valor in memory. On the positions held by the lions of the Thunderbolt a hell of iron and fire is unleashed that lasts for hours, during which the parà do not come off their holes and positions even dead

On 25 October Rommel hurriedly returns from a convalescence that lasted just over a month, but he is no longer what he was before. After the British attack on November 1, where intense bombardments sow death from the sky, Rommel, the next day, decides to retreat, that is a long march of about 100 kilometers, on foot, in the desert. It looks like a biblical exodus.

On 5 November, General Von Thoma, commander of Afrika Korps, surrenders. The surrender of Von Thoma is the image of the surrender of the Axis troops in El Alamein. […] The Italian-German Armored Army (ACIT) reported a total of 25.000 casualties including dead, wounded and missing, as well as 30.000 prisoners: that is a good half of Rommel's army. Two thirds of these losses are Italian.

On November 6, the Thunderbolt stops fighting. Of the initial 3.500 soldiers, only 302 remained. The Thunderbolt no longer exists. Its commander, General Frattini, is captured, but the value of his soldiers is also recognized by the British. Churchill himself, in a speech in the House of Commons said: We must really bow before the remains of those who were the lions of the Thunderbolt.

The war bulletin n.1083 of May 13, 194 announces: "The first Italian army, which was given the honor of the last Axis resistance in the land of Africa, stopped fighting by order of the Duce […]. " Exactly 5 years and 5 days have passed since the proclamation of the empire.

Calogero Vinciguerra Published by the author pages 188 The world is evolving faster and faster, thanks to the immense possibilities ...
528
Read

Jacopo Gualario Ed. Youcanprint, 2022 pp. 118 From the covid-19 pandemic crisis to the most recent armed conflict between ...
348
Read

Marco Rottigni, Andrea Danesi Visconti Published by the authors pages 224 The decadent world of the near future, a famous ...
543
Read