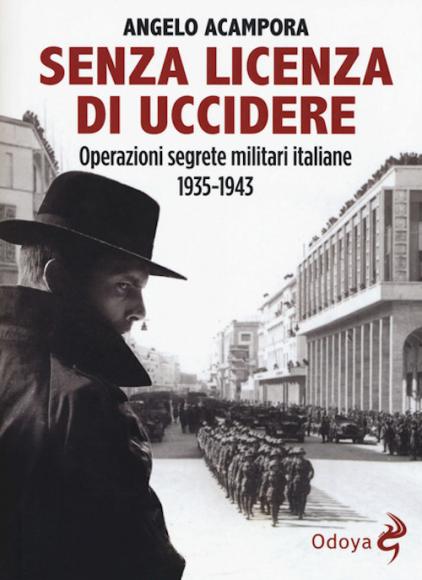 The author, historical researcher and author of other essays on spies and secret operations, in this book, limited to a well-defined period of time, makes known, thanks also to recently declassified documents, the companies and the names of characters who , although they remained anonymous for a long time, they have, in some way, significantly influenced the course of history.

“The Italian shadow men, in jargon the fake beards, sometimes equipped only with their ingenuity, were the protagonists of extraordinary operations by which they also managed to save thousands of lives. Many of them, satisfied only with the commendation of their superiors and referents, could never be decorated with a medal of valor because their identities remained secret even after the war was over. "

The difficulty in finding news on intelligence operations between 1935 and 1943 is due both to the self-destruction, after 8 September, of the archives of the Italian investigative apparatus, and to the fact that many agents fell on the field, others disappeared mysteriously, others again, after the war, they returned to anonymity.

Compared to today's world, the means that such people had available to carry out their business seem to belong to "Middle Ages of Information." The risks they faced, if discovered, were many. They ranged from simple repatriation, if it was a diplomat, to prison, up to, in the most serious cases, capital punishment. Some, however, were offered the double game loophole in exchange for saving their lives.

It caused a sensation to discover that an apparently harmless employee of the English embassy in Rome, Francesco Costantini, managed, in 1935, to steal secret documentation from the safe, without being discovered, all thanks to the coordination of the SIM, which had among its men the one who will go down in history as "the terror of embassies", the captain of the carabinieri Manfredi Talamo, to whom “One of the fifteen gold medals in the entire history of SIM will be pinned”. The latter commanded the "P Squad" - made up of 12 carabinieri marshals - which had the task of collecting secret documents, especially codes and ciphers, kept in the foreign embassies of Rome. Colonel Talamo was among those who died shot in the Fosse Ardeatine.

That of the lieutenant captain Giorgio Verità Poeta is a name that remained secret for seventy-eight years, until a conference was organized on him. Cryptographer belonging to the mysterious Beta Office of the Information Department of the Regia Marina (department that had the Captain Mario De Monte as head of service and Admiral Alberto Lais as commander) "He was considered the most enigmatic and at the same time the most extroverted genius decryptor of the Regia Marina." He died as a result of poisoning on October 22, 1939. "He had just managed to" break through "a complicated cipher of the French navy for communications with patrol ships with telegrams encoded above with a rather complex method."

Cynthia, born Amy Elizabeth Thorpe, was born in 1910 in Minneapolis, Minnesota. After marrying a British diplomat serving at the British embassy in Washington in 1936, she cultivated "A series of friendships with personalities from the world of high finance and politics (as well as diplomacy), not a few of whom also passed by his bed". Engaged by the M16 (British Secret Service), she met, in 1941, Admiral Alberto Lais, who had been head of the secret information service of the Royal Navy and that Cynthia, - in some of her posthumous revelations, spread thanks to the book of the former spy Montgomery Hyde and published in 1962 under the title The Quiet Canadian, when Admiral Lais had been dead for 11 years - he accused of high treason, as it would provide her with the strategic naval operational code of the Royal Navy. From these accusations the Admiral - who in any case could not have defended himself, due to his previous death - was "Completely cleared of three trials, by the Italian Navy General Staff and the British Ministry of the Navy." For the infamous accusations reported in the book Hyde, the author was definitively convicted in cassation, while the Italian publishing house withdrew the book from the market, declaring that, in the future, it would never reprint it.

Who is Aristide Tabasso? Nothing would have been known about him if his son, Franco Tabasso, had not told the story of his father in a book entitled "Su onda 31 Roma non responsive", a 1957 book that was seized by the police when it still seemed that the copies did not had been put on the market. "This is the rarest censored book in Italy." It tells of the life and exploits of Aristide Tabasso, born in Taranto in 1900 and joined the counter-espionage of the secret services of the Royal Navy. It also tells of heroes and traitors of the Second World War, as well as of the famous Churchill-Mussolini correspondence, still unobtainable and whose movement, according to what is narrated in the book, had one of the protagonists in the Tabasso. He died in 1951 after having lunch in a restaurant in Verona with an unknown person. For the son it was poisoning.

These are just some of the protagonists of this book whose reading, due to its content and the style used by the author, is as pleasant as that of a spy novel.