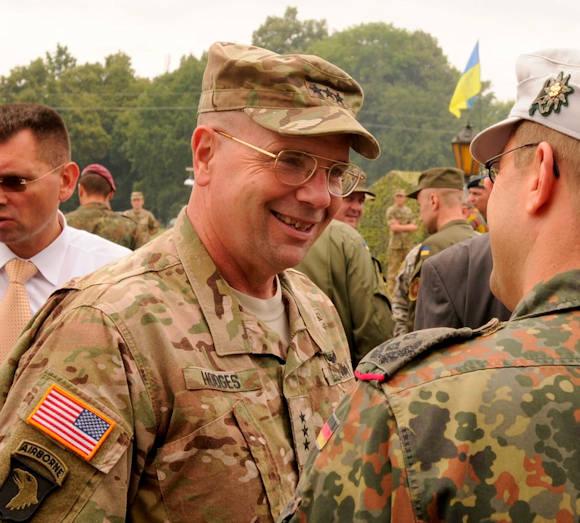 A retired general can speak freely, without political or hierarchical constraints, especially in the age of SOCIAL MEDIA and thanks to the credibility that comes from a splendid career, but also from the fact that he has demonstrated an excellent ability to anticipate events in the short term on the basis of his experiences and knowledge. For this, we will try to read in one breath the thought of the former commander of the American armed forces in Europe, Ben Hodges, who we have already learned about in two recent articles. To some it will seem very little diplomatic: in the end, we will clarify why.

Where does the reasoning start?

The premises are three:

1► The war is neither a private affair between Russia and Ukraine nor a distant matter and does not lead to consequences: "This war is not just about Ukraine, it is a war in Ukraine against Europe",

2► The time factor plays an important role: Russia does not have it indefinitely and for this reason "the next two weeks will determine what happens",

3► Beyond the Russian propaganda about its own military superiority at this time "We have a chance, actually, for Ukraine to destroy Russian forces while they are backtracking, while they are trying to reconstitute themselves: they are vulnerable".

Winning is possible and we can do it because the Russian military leaders are "medieval and brutal": precisely because of their backwardness we can beat Moscow - through Ukraine - on condition "that we want to win".

Because beating the Russians is a must

The evidence of possible war crimes committed in the north of Kiev and, probably, in all other Ukrainian lands occupied by Moscow forces, obliges us to remember that this is not the first time that the Russians have used the physical elimination of opponents as a tool. of military and political struggle: “They killed 22.000 Polish officers, intellectuals and leaders in 1940 in the Katyn massacre, to eliminate the possibility of a Polish state. They are doing it again, in Ukraine. The deliberate targeting of civilians in Ukraine by Russian forces is starting to make Srebrenica look like a car window shooting ... "

Hodges does not believe in a diplomatic solution to the conflictOn the other hand, with the aggressor still on the offensive, even talking about decisive negotiations means doing harm to the intelligence of the listener. Then there is a strategic question of no small importance: “How can we negotiate with them? We have to break his back now, as long as we have a chance ". Now, the goal of the Operation Unthinkable, drive the Russians back and make them no longer a danger to their neighbors, it seems as possible, thanks to the enormous strategic mistakes made by the Kremlin: according to the general we can push Russia into its borders and prevent it from being offensive to its neighbors for decades . The relationship with what Moscow calls the "neighboring foreign" does not only concern Ukraine and the Baltics: according to the American general, "Russia is a terrible partner" for others as well, such as Azerbaijan and Armenia: "Kremlin rule has failed to improve the life or prosperity of the youth of either country". Not that the United States hasn't made any mistakes: in the foreseeable future, they will have to develop "A strategy for the whole region that emphasizes economic development and diplomacy".

Beating Russia comes at a cost

But how much would it cost us in terms of security to take sides for Kiev, seriously arming it, and thereby directly hinder Putin's plans? “Helping the Ukrainians does not automatically mean causing an escalation or a third world war. It can only bring benefits. Tell the Kremlin exactly what we're going to do and present it with an overwhelming force. They will not dare to challenge her ".

If we miss the opportunity "To guarantee the victory of Ukraine" providing them "What they need, urgently, within the next 2-3 weeks ... Russian forces will learn, reorganize and acquire the ability to grind Ukraine and possibly defeat it within the next two months". This is if we fail to supply it with weapon systems: ultimately, "It's up to us".

Specifically, what does Hodges mean? “Ukraine needs 122mm and 152mm missile and artillery systems and ammunition in the next three weeks. And they need medium range air / missile defense systems. All of these are present in the countries of the former Warsaw Pact. No need for multiple lists ... just get them and send them ".

And the diplomatic solution?

Yet, there are those who think that Ukraine, partly in order not to move us from our comfortable life, should accept territorial mutilation and give in to violence, so "Insinuating that the Ukrainians cannot choose their future and that it is best for them". Hodges does not send it back to intellectuals and politicians who think like this: “I recently spoke to a journalist from the UKR from Kiev. He said to me: General, we Ukrainians just have to win. We can rebuild everything ". Here, says Hodges, "This journalist inspires me" more than other people, those who invite others to be mutilated to leave them in comfort.

Why so much hardness? Because these possible war crimes in large numbers represent “A stain that will remain on Russian officers forever. This is the Gerasimov doctrine. Gerasimov is the new Mladic. We have to talk about winning this war, not about ending it ”.

Everyone thinks how they want. General Hodges, as a free citizen, thinks so.

How many times have we heard phrases such as "Some young people would need military service" or their more ...
3707
Read

Who remembers the fall of the Berlin Wall on November 9, 1989? A few months earlier, Honecker had predicted in January ...
5723
Read

When you use a weapon or apply a tactic in war, you do it for one reason only: it gives you an advantage in winning or, if ...
5250
Read

Put an evening in Georgetown, near the American capital, at the prestigious Italian restaurant Milan. Put to a ...
5488
Read

You read the newspapers and you have the impression that sooner or later the Russian president will leave us - it is appropriate to say - in ...
6008
Read

Today 3 June has arrived what seemed impossible on 24 February: the XNUMXth day of the war of ...
4084
Read

The whole world knows the so-called "Gerasimov Doctrine" thanks to Mark Galeotti, one of the world's leading experts ...
5624
Read