The 2 June: Homeland and Armed Forces 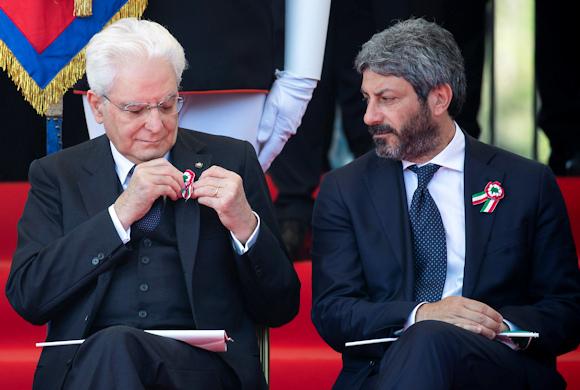 Now that the June 2 parade is a thing of the past, let's try to make two reflections with firm bowls.

The 2 June is not the celebration of the Armed Forces, but of the Republic. The Armed Forces should be celebrated on November 4th, on the anniversary of the victory of a century ago that gave us a united Italy thanks to our weapons. Instead, the 2 June solemnly remembers an event that concerns it very little, when the Kingdom of Italy turned into the Italian Republic following a popular referendum of which others were protagonists among which, say the evil ones, a certain number of cheaters election. But, rigged or not rigged, the fact remains that the Republic is an incontrovertible reality and its recurrence finds the most significant symbols at the most in the parties, in the President, in Parliament, even in the President of the current Chamber who greets with his fist closed and presumptuously believes he has the power to dedicate the 2 June celebration to those who want him.

So why is this important anniversary solemnized with a traditional military parade?

The fact is that in the aftermath of the war, badly lost, and of the new institutional order favored by the push of the liberators' bayonets, the frail republican needed to assert itself as an independent and sovereign state, not simply under the protection of others. He had to do it in order to be accredited towards his own citizens, exhausted and humiliated by a war that had destroyed the country, as well as the new "allies", having escaped a "communist" destiny for which many were cheering, in Italy and abroad. In short, he had to prove that the danger of losing freedom and sovereignty, as well as the establishment of an illiberal regime, had definitely escaped.

And what better means than the Armed Forces to indicate this independence? The Armed Forces, in fact, are the main indicator of sovereignty, independence and therefore national freedom, since, unlike the other institutions, they do not simply promise to protect and apply the law, which could perhaps be penalizing for the State in certain circumstances, but only in the national interest, reason of state. To have the Armed Forces (efficient) means to say to the other interlocutors "we are free and, as such, we are willing to fight against the interests of others who, although legitimate, violate our own"; and we can do it because we have a tool that responds first to the Head of our State rather than to national or international parties, courts or institutions, perhaps even more authoritative than the same. This condition is exemplified by the type of "contract" that binds these forces to the State, embodied in an oath of allegiance to the person of the Head of State (King or President does not change the substance) who becomes Supreme Commander, in the assumption that the national interest and the survival of the people as a cohesive and recognizable community are the superior values ​​on which they are called to watch. 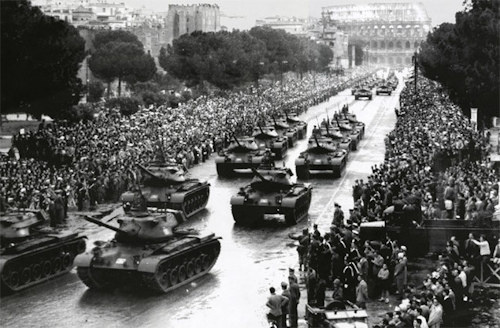 After all, let's think about it, this is not how frustrated Italians often envy the Anglo-Saxons when they proclaim "Right or wrong, my country", without embarrassment? What is this phrase, probably born in France at the time of the Revolution, if not a declaration of challenge, with that "Wrong", to those who cultivate accidents, however legitimate, against our own interests?

Returning to the June 2 fashion show, then, what the post-war Italian state wanted to affirm, with a jingle of sabers that could not worry much, was its newly found independence, its freedom. And he did this by identifying himself (identifying himself) with his Armed Forces, the only means suitable for this purpose, that paraded with their Flags in front of the only holder of the oath of loyalty they had lent.

From this to distort the parade, injecting herds of blissfully plaudent mayors walking in via dei Fori Imperiali and generous young and less young people who populate the infinite galaxy of a-military voluntarism with all the baggage of their Sunday-like similarity, little there it lacks. Indeed, nothing. Moreover, the sad transformation of what was a proud demonstration of strength and virility in a simple and expensive showcase of varied humanity is not the exclusive fault of the latter government, which has done nothing but give you the coup de grace, but it is a "Crime" that has dragged on for decades, indeed for decades. Ever since, with the excuse of dangerous vibrations for the keeping of monuments, the removal of heavy vehicles, the most awaited by the passionate public of the time, was forbidden, continuing with a continuous addition to military-level to the event that did not have even respite in the centenary of the Victory of the 1918.

And now, sadly, we just have to watch what's left. A lackluster manifestation of various humanitarian and internationalist ambitions, crumbled on a fleeting military context with some rifles and many fanfares of which it is politically correct to underline only the supposed pacifying impulses of humanitarian workers of series B; and that does not allow the pronunciation of the word Patria except to the ritual homage to the Unknown Soldier - perhaps in order not to make him worry, not to disturb his glorious sleep - shortly before the beginning of the ceremony. In short, those who distorted the ceremony of 2 June - transforming it even on the occasion of confrontation and provocation as in the case of the statements by the Minister of Defense on the inclusiveness of the same ("Before" was "exclusive"?) and the stinging reinforcement of the Prime Minister on rifles to be turned into peace scholarships (v.video) - he did it consciously and does not limit himself to revealing an already known dislike for the military and militarism in general, but takes a clear and unequivocal position on whether or not he still affirms our sovereignty.

Let them do it waiting to transform us into terminals of some computer platform that takes the reins of our being a nation or in the anonymous anthropological broth of a European pot in which peoples, languages, ethnicities and traditions completely cancel, little change. It is, however, the dissipation of the Italian people as they have been known for centuries, eroding first of all the reasons of pride that aggregated it.

It is not a call to arms for a rearguard battle, the one that I propose, but a burst of intelligence that makes the toad understand - us - that is our boiling that little by little are working, not the preparation of a bath hot.