Home Recommended Letters to the Director A white book for the defense of the whole ...

A white book for the defense of national interests 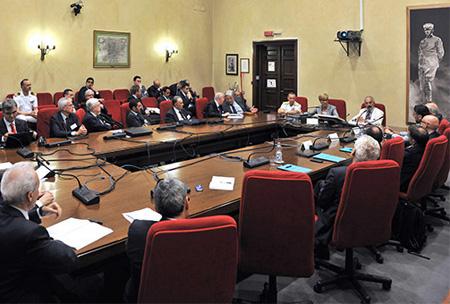 Long obsolete category in the lexicon of politics, national interests have risen to new life in the guidelines of the white paper, being prepared for international security and defense.

The defense minister appointed a group of experts, who acquired "a great deal of data and knowledge", submitted them to preliminary analysis and prepared the guidelines for the white paper. The New Thousand has examined them and, accepting the solicitation of the document to the participation and support of citizens to international commitments, expresses, on the merits of the political proposal, its own evaluation, which is necessarily synthetic and interlocutory.

The declared objective of the guidelines is the "strategy of evolution of the military instrument in the next fifteen years", respecting three "pillars": European integration, transatlantic cohesion, global relations.

Is the failure to mention the Mediterranean sea, a basin of varied cultures and national needs contiguous to Italian interests, accidental or deliberate?

It is true that, following the definition of national interests, the reserve of "particular attention to the eastern and southern neighborhood of the European Union to the countries of the so-called extended neighborhood" is declared, but, at the moment, the reserve appears timid and circumscribed by the necessary alternative options, given that "Italy will not be able to give an autonomous answer to all future security and defense needs".

The question, which the New Thousand explicitly proposes to the attention of the minister and the group of experts, concerns the political profile of European integration, which is undoubtedly necessary, bearing in mind, however, the divergence of national interests which has recently materialized. in the military intervention in Libya and in the resulting Libyan question.

It is clear that the Italian political weight at the European level must increase. For too long a hand has been passed to the management of other countries and other interests. But it is equally evident that this weight, in the search for new balances in the integration process, can not be separated from a presence and a garrison of the sea that in the document is entrusted, at the moment, to the mere recognition of necessary contiguities and the declared need for protection of Italian shipbuilding.

Correctly, the document does not ignore the economic and financial profile of military investment decisions, to avert the accusation of wishful thinking, but, a fortiori, the group of experts will have to open up to communication to allow appropriate levels of confrontation during the preparation of the book White. Also because it is equally correctly stated in the document that the "qualities require the effort of generations to be developed, made their own and become the patrimony of the staff with the stars, and, once lost, they are forever".

In this perspective, the national security strategy and the international credibility of the country-system require the presence of naval armament in the near and near sea.

Perhaps guided by mysterious genetic messages I live the recurrences of May 24, June 2 and November 4 in ...
5675
Read

The Leonardo Company (formerly Finmeccanica) is presenting its ...
3250
Read

The Russian attack on Ukraine closely resembles the Italian aggression on Greece in October 1940. Putin, ...
4011
Read

Good day. I read, always with pleasure, Online Defense. I take the liberty of offering a very small contribution, I hope ...
12968
Read

The war in Ukraine highlighted the serious shortcomings of the Italian Army in the field of armaments in ...
12939
Read

Regarding the transfer of armaments to the Ukrainian armed forces, it should be noted that it was an operation of ...
9286
Read