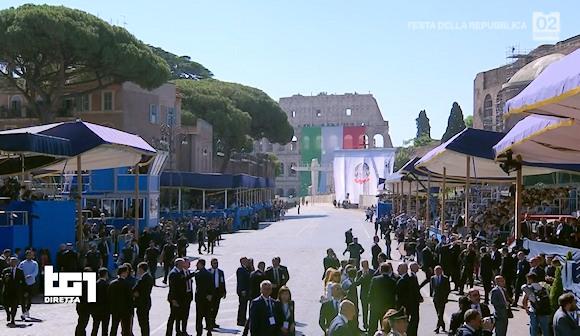 On June 2 of every year in Italy the Republic is celebrated, that is, the form of state chosen by the citizens is celebrated with a referendum which, even the most impartial historians define at least as "doubtful", the fewer the doubts of the constitutionalists, but you know , the law applies to enemies and is interpreted for friends.

Considering the documents of the not too distant past, it is beyond doubt that the 2nd June celebrate a rupture and not a reconciliation, which would be possible if one celebrated with equal solemnity and emphasis the 17 March (birthday of Italy), but that unity was the daughter of the Savoy monarchy subject to the shame of the alliance with fascism, as if Umberto Biancamano had transmitted the gene of collaborationism to the great-grandchildren of 1000 years younger. The 4th November (celebration for the victory of the 1st World War) in a situation such as today would raise at least some perplexity, also because there is the risk that someone will be touched by the doubt that peaceful Italy was able to invade a sovereign country and then down there with biases and distinctions full of syncretisms. At this point we could focus on 25th December, I believe that for this date there is no need for explanations in parentheses, but even in this case I would not be sure of the uniqueness of intent.

However, Italy is a particular country, even when it chooses the date to celebrate itself and so, after two years of health emergency, it also returns to parade its Armed Forces, but the thousands of distinctions remain, keeping to clarify that they are peacekeepers even in a contemporary world devoured by war and then here they are parading the firefighters together with their rifles, after the sabers the Red Cross women and who knows who else. In short, a divisive and watered-down event, already suspended by Pertini and Forlani in the 80s, not at all felt by citizens now drugged by the empty propaganda of a policy contrary to essential concepts such as: sovereignty, national interest, ethics of citizenship.

The parade itself has little to do with this reasoning, the military, as always, are committed to showing themselves at their best, aware of being one of the solid and loyal institutions to the state, perhaps the only one, but it is the rest of the country that carries the contradictions of June 2nd, a nation, Italy of the XNUMXst century, devoid of its own dignity, a country that has been able to keep alive only the boorish and partisan conflicts of a politics of opposing factions, never able to find a synthesis, an agreement, a moment of sharing.

This is why I would rethink the June 2nd party.

Dear reader, in the homeland of amnesties and given the current conditions of the country, perhaps you will be able to "heal" your doubts a posteriori with a new historical reference event ... 2nd June 2023 or 2024 to celebrate for many years?

The comparative examination of the weapon systems of our three armed forces reveals a serious imbalance. While the ...
4437
Read

One of the most urgent programs for the renewal of the equipment supplied to the Italian Army is that ...
24719
Read

As is known, NATO was born (pass the tongue twister) in 1949 as a mutual defense organization between Belgium, Canada, ...
3422
Read

One of the main lessons learned from the war in Ukraine is the need to enhance vehicle protection ...
14378
Read

The war in Ukraine saw the consecration of the drone as a fundamental and indispensable weapon system of the field ...
27064
Read

Perhaps guided by mysterious genetic messages I live the recurrences of May 24, June 2 and November 4 in ...
6341
Read

The Leonardo Company (formerly Finmeccanica) is presenting its ...
3465
Read

The Ukrainian crisis and the consequent possibility of the involvement of the Italian Army in a high-level conflict ...
9162
Read

The Russian attack on Ukraine closely resembles the Italian aggression on Greece in October 1940. Putin, ...
4670
Read

Good day. I read, always with pleasure, Online Defense. I take the liberty of offering a very small contribution, I hope ...
14297
Read