Home Recommended Letters to the Director English is not an enemy language. Attacch ...

English is not an enemy language. Armed attacks against the MM 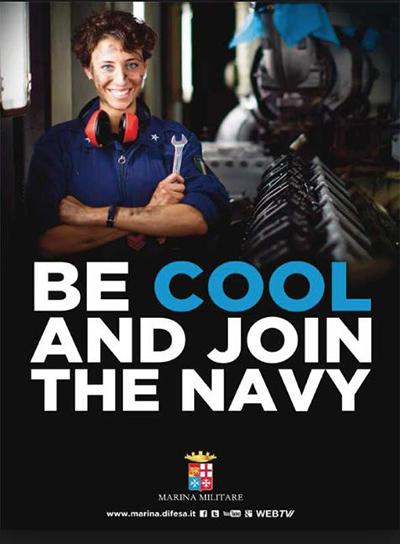 Distinguished director, it amazes me to observe the great media hype that aroused the use of the English language in a message from a promotional campaign by the Navy, obviously aimed at young people of eighteen, for recruitment in the naval academy.

These days I read about several critical publications but also appreciation for the new way of communicating that adopted the Navy (appreciation especially at the beginning, as a response to some criticisms, which at first seemed honest but that at a closer look made to raise the doubt that perhaps behind there is someone or a network that aims to disavow the work of the Navy). And yes, because, see these continuous attacks devious, just because they stick to a simple promotional campaign, which may or may not like, but certainly does not deserve so much emphasis in the newspapers or does not aspire to fit as a communicative icon to be remembered or cited by the Accademia della Crusca, makes you think. Those who are more careful could link these cross attacks to something more complex.

Perhaps after so many years of silence the Navy has opened a communication that showed what the Navy does every day, Mare Nostrum was an example. Then we understand that, in a period of lean cows, where the cake is always smaller and the guests the same, the criticism could be useful to create an aura of annoyance towards an armed force that, with right, claims its right consideration in what should be the country's strategic plan.

Of course I speak of a strategic plan or strategic thought, because we are anxiously awaiting the new White Paper of Defense, announced a few months ago by the Minister of Defense Pinotti. To tell the truth, those who deal with these issues were astonished to see that, in the editorial guidelines of the White Book, published on the Defense website and in which citizens were invited to express their opinions and suggest their own ideas, it lacked every small reference to the word maritime, sea or in any case desire and wish to consider Italy a nation that makes maritime power the determining factor of its own development.

If today we had to completely reset the military instrument and restructure or restructure it, given the geographical disposition of Italy, the essentially maritime criticalities that must be faced and the role that Italy should have in the Mediterranean, it would make sense to have such a large disproportion in numerical terms and means between Army, Air Force and Navy. I have intentionally listed them in descending order based on the staff they employ. I, but like any other non-approved citizen, I would have no doubt in imagining an Italy that makes the naval instrument its key tool to become an international reference point in the Mediterranean (invitation, those interested in deepening the subject, to read an interesting article by the ambassador Paolo Casardi entitled "White Paper: The Role of Foreign and Defense Diplomacy" published in an interesting geopolitical journal IL NODO DI GORDIO, year III- Num. 6 - September 2014, page 34).

Italy reference of the Mediterranean is also what the United States and NATO would wish. Have a nation like ours with a well-equipped and important Navy that guarantees safety in the Mediterranean without any limit. This would do our beloved country very well. Investments in this sector would lead to both industrial and occupational growth and would help us grow as a renewed country, which really counts in the international geopolitical landscape. This would bring us out of the political atmosphere of operetta that we are experiencing in this last period once and for all.

But let's go back to the question we started from: the fierce criticism of this new advertising campaign by the Navy. Regardless of the opinions, what in advertising decrees the success of a communication campaign are the results, so who thought this campaign will have to evaluate it on the results and objectives achieved.

I work by passion and by the profession of communication and I find that the use of the English language should not be seen as an enemy language, which cancels the history and tradition of the people who use it with a feeling of openness to the world and to globalization. In history, there have always been phenomena of lexical and cultural contamination between two or more peoples that meet. Perhaps the reason why in Europe and internationally for a long time we have struggled to communicate on a par with other interlocutors and that in our training system English was studied a little lightly and relegated to a poor option in its own curricula vitae. Today this is no longer the case and we finally understood, with a few exceptions, that knowing English is a necessity and an opportunity that can no longer be postponed. This is also demonstrated by the absorption of many English terms in the Italian vocabulary, such as weekends, business, managers, marketing, audience, miss, records, stress and so on.

It seems to me that no one criticizes, or has done so in the past, the Miss Italia beauty contest asking for it to be translated into Signorina Italia. No one is shocked if they offer the possibility of saving money in a bed and breakfast rather than in our local Pensione Margherita. The newspapers are full of these expressions and the advertisements they host, even if only to promote a high school, do it by inviting parents to the open day or to play on the misunderstanding and on the union of even two terms, hold on tight, both English, Eat and Italy, which in the advertising campaign, also published in La Repubblica, becomes Eataly, aimed at promoting Italian food.

I find it a good thing that an armed force like the Navy, which summarizes Italian maritimeity and has a great history, which is also a treasure trove of values ​​and traditions, has shaken off some dust and tried to get to the younger people in a new and fresh way. It seems to me that for the particular work that the sailors do they are a group of people oriented to mobility and to the exchange with other peoples.

I am not surprised if someone judges that the use of the term cool is not acceptable, but I wonder if the critical approach of some is not the symptom of a haughty detachment that always sees the people from the top down. So come on guys and Join the Italian Navy, at least for the courage and initiative the Navy communicators have shown to be consistent with the traditions of their predecessors.

Perhaps guided by mysterious genetic messages I live the recurrences of May 24, June 2 and November 4 in ...
5675
Read

The Leonardo Company (formerly Finmeccanica) is presenting its ...
3250
Read

The Russian attack on Ukraine closely resembles the Italian aggression on Greece in October 1940. Putin, ...
4011
Read

Good day. I read, always with pleasure, Online Defense. I take the liberty of offering a very small contribution, I hope ...
12967
Read

The war in Ukraine highlighted the serious shortcomings of the Italian Army in the field of armaments in ...
12939
Read

Regarding the transfer of armaments to the Ukrainian armed forces, it should be noted that it was an operation of ...
9285
Read