Home Recommended Letters to the Director Letter to Online Defense (of a regular ... 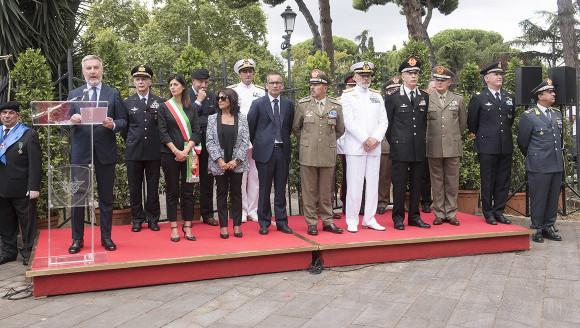 Hello, with these lines I would like to reply to the words of General Li Gobbi highlighted in your article 8 September, Li Gobbi: "Dear Minister, the real resistance was not the communist one!" (v.link)

As a devoted reader of Your Magazine, I write that I always find updated on the activity of the military world. I also write as a Communist, the specific one because I do not want to give my writing a universal character, but because it is clearly a personal point of view. Therefore: it is certainly true that the soldiers on the occasion of the 8 Settembre 1943, taken by an understandable disorientation, have largely behaved well trying, as far as possible, to continue to serve the Fatherland defending it in the various ways that the General reported with historical fidelity. This I believe has never been the subject of discussion by anyone, not even by us Communists.

Well this media contrasting operation on the partisan war was certainly not wanted by the democratic forces that emerged from the Resistance that together wrote our Constitution. The responsibility for this divisive act lies with those who, in recent years, have fueled a climate of unacceptable historical revisionism, arbitrarily and autonomously attributing the 25 April party to the Communists alone and this for mere electoral opportunism.

The Resistance struggle was made without "de facto" ideological bias. Of course, for the most part the partisans were Communists and Socialists, but this because (it would be worth reporting more often in the chronicles) they were persecuted by the fascist regime and later deported together with homosexuals and Jews.

This condition meant that there were many more people politically oriented to take refuge in the mountains to try to beat down those who persecuted them and kept a whole nation in check. Just like entire departments of soldiers framed and their officers did, and even here it can be hypothesized that there were Communists or Socialists as well as Sturzo Catholics among them (though thinking heads).

Never, however, at any time the Communists, Socialists and Catholics have claimed exclusive paternity in this regard. Therefore the General would have done well to specify who and how he made the 25 April party "divisive". Because this way it seems that the heirs of the partisans have appropriated a historical recurrence that belongs to everyone instead. This way of dealing with the debate bothers me because if on the one hand we Communists spend time arguing with the right to clarify that the Liberation Day is also their Feast, on the other we have to be almost blamed for making us this filthy revisionist operation.

Moreover, Fascist and Soviet totalitarianism cannot be put on the same level for the simple fact that our beloved homeland has suffered the first and not the second. And to assimilate the two totalitarianisms is, as far as our History is concerned, an operation of sinister revisionism and goes against the principles of our Constitution which is avowedly ANTIFASCIST, even if somebody seems to forget about it these days. Thank you.

Dear affectionate reader, I thank you for your thought contribution: reasoned and well expressed. I do not want to try to feed the inexhaustible controversy on 8 September. I limit myself to hoping that one day our country - like almost all the others - will finally have a unifying moment, one of pride and respect (even internationally) outside of a football match. Maybe after a victory and with a new Constitution.

I have been reading you for several years with great interest as your articles delve into important world issues ...
6090
Read