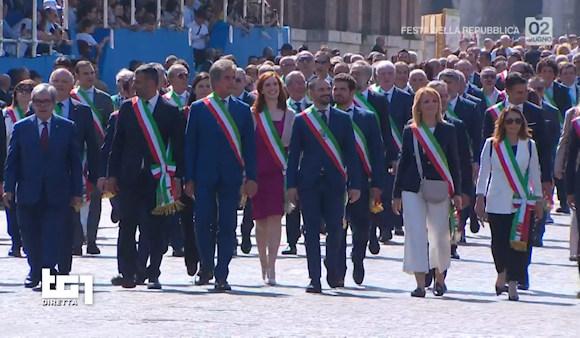 Perhaps guided by mysterious genetic messages I live the recurrences of May 24, June 2 and November 4 in the spiritual company of Giovanni Loddo, my maternal grandfather, who fell on the Piave at the end of the First World War, and his younger brother, Francesco, who fell two years earlier in Monte Zebio on the same day that "his" commander of the "Sassari", General Eugenio Di Maria, was fatally wounded. But on May 24th, our disappointment was great when we realized, my two ancestors and I, that no one ... the press, the political world, schools, the armed forces ... no one celebrated the day of the "Infantry queen of battles".

That Piave that has been murmuring since May 24, 1915, no longer murmurs in 2022. Yet today's Italy, with the exception of some mutilations due to the Second World War, is the one born of that murmur and the sacrifice of the lives of hundreds of thousands of Giovanni-Franceco-Loddo infantrymen.

Disappointed, we waited for 2 June and the parade of the Imperial Forums to be able to breathe the ancient patriotic atmosphere that in the old days united people and armed forces. To tell the truth, on the day of "Republic Day", more than the homeland, there was talk of the European Union, NATO, the USA, Russia, Ukraine and politics yearning for peace.

Some perplexities arose when the issue of political, economic and military support by Italy for one of the contenders was touched upon. Inevitable that during the broadcast of the parade my two ancestors asked me questions about why there was so much talk of peace and why Italy was involved in events evoking the roar of the cannon: "Who attacked Italy or the European Union or NATO? "

“None, but…”, but I gave up getting involved in the analysis of the interests at stake for NATO, the European Union, the USA, Russia, etc. And so I limited myself to repeating the official mantra: "Italy is part of a military alliance that defends the states that are part of it", but I hopelessly evaluated my possible attempt to answer the most obvious of objections: "But Ukraine is not part of NATO!". In fact, I should have struggled between opposing theses, one of which, supported by authoritative voices from the political, cultural and military world, argues that NATO has become, under the pressure of the USA, an offensive organization in constant expansion.

Set aside any ambitions of national or global political analysis, with my relatives I followed the images of the parade of men and women in uniform and, absolutely new, in white coats. The link between the COVID pandemic and the armed forces was soon translated into eloquent numbers: the Italian population was, with the help provided by the armed forces, the most vaccinated in Europe (90,08% of those over 12 completed the vaccination cycle ), although it nevertheless recorded the record of deaths from covid (about 167.000 victims). The incongruous correlation between the two data hovered in the air, remaining however without comment, even during the parade of the representatives of the 600.000 Italian health workers, certainly disappointed by the absence in the stands of their "commander in chief": the minister health care.

An absence perhaps due to the need not to evoke the military secrecy (yes: military secrecy!) Wanted by the government, in analogy to the provisions for the weapons sent to Ukraine, regarding certain problems concerning the vaccination campaign. Perhaps the fact that part of the enormous quantity of doses purchased at EU level, hundreds of millions of doses for an amount of tens of billions of euros, is now in "expiry" and therefore in the process of being considered not beneficial to vaccination policy. to be poured out on the African continent, in the name of an impromptu providential charity. But immediately afterwards, the images of the departments that paraded in parade and, understandably, those of the band of “our” Sassari brigade who marched to the notes of the Dimonios anthem were enough to reassure our hearts.

There are two mandatory notes: no representation of the two historical regiments of the "Sassari" parade nor a word was spent, as was done for the other bands and departments present, on the Sardinian origins of the brigade, on the fact that the "Sassari" is the most decorated large unit of the army and with the most tragic percentage of casualties. Perhaps this is why at the end of the broadcast grandfather Giovanni summed up his perplexities in a solemn washing of the head addressed to me, as if I were the culprit of the omissions of the commentators and the head of national politics: "Basically you are telling me that if today I were Could a soldier in the Italian army ask me to risk my life again just because Russia and America go to war, to defend their interests, choosing as a battlefield a nation with which we are not even allied? Maybe it's because we Sardinians feel very Italian and not very European, but I don't agree with this bad habit ”.

Then he added: “Besides, you didn't say a word about the fact that the“ Sassari ”, which you had the honor of commanding, has just been mentioned during the parade. They did not even say when she was born, on March 1, 1915, nor where she was born, a regiment in Sinnai and one in Tempio. They didn't even say when "Dimonios" was born, the hymn you wanted to be born during your period of command threatening your captain who knew about music, Luciano Sechi, to cut off his career if he didn't propose "an anthem like must". And they did not even say, what at the time of her "came out" in the newspapers, that if Sassari still exists it is only because my daughter's son refused to obey the order to dissolve it that he had arrived from Rome. You should make your voice heard more, my nephew ”.

I kept the cazziatone, limiting myself to replying to babbai Loddo (so in Nuoro we refer to grandparents to distinguish the maternal ones from the paternal ones): "Babbai Loddo, fostede tenede arregione, but giai d'ischidi ca noso seueu bregungiososo" (grandfather you are right, but you know well that we are shy).

The comparative examination of the weapon systems of our three armed forces reveals a serious imbalance. While the ...
4013
Read

One of the most urgent programs for the renewal of the equipment supplied to the Italian Army is that ...
24679
Read

As is known, NATO was born (pass the tongue twister) in 1949 as a mutual defense organization between Belgium, Canada, ...
3412
Read

One of the main lessons learned from the war in Ukraine is the need to enhance vehicle protection ...
14365
Read

The war in Ukraine saw the consecration of the drone as a fundamental and indispensable weapon system of the field ...
27055
Read

The 2 June of each year in Italy is celebrated the Republic, that is celebrating the form of state chosen by the citizens ...
2841
Read

The Leonardo Company (formerly Finmeccanica) is presenting its ...
3464
Read

The Ukrainian crisis and the consequent possibility of the involvement of the Italian Army in a high-level conflict ...
9153
Read

The Russian attack on Ukraine closely resembles the Italian aggression on Greece in October 1940. Putin, ...
4666
Read

Good day. I read, always with pleasure, Online Defense. I take the liberty of offering a very small contribution, I hope ...
14284
Read