Home Recommended Letters to the Director The Carabinieri as the only & q ...

The Carabinieri as the only "Mountain Police"? 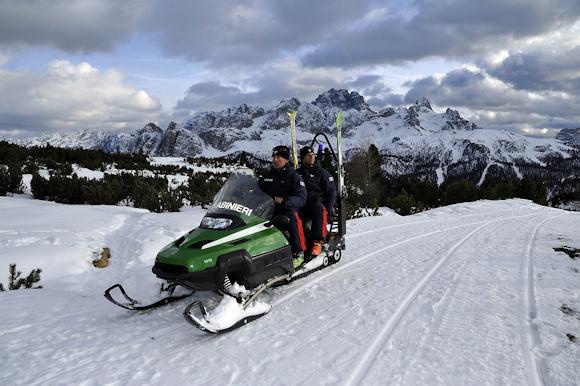 Dear Director, I am writing these few lines of mine on a subject which, with the arrival of the holidays, becomes topical again. I am referring to accidents at high altitudes (both in summer and in winter) and to the tasks of Alpine Rescue divided between the various police / military forces and shared with the CNSAS (which I do not intend to deal with here).

The Alpine Rescue of the Guardia di Finanza (SAGF) ​​was formally established on March 3, 1965; however, in fact, its origins date back to almost a century earlier, with the establishment of the Customs Guard Corps: this Corps had, in fact, the task of customs and border surveillance in a reality where land borders were (are ) largely represented by the mountain range of the Alps.

Later, what later became the current Guardia di Finanza was the subject of various reforms that changed its tasks and organization.
Lastly, Legislative Decree no. 177/2016 with which the legislator, after having acknowledged that with European integration the internal borders had in fact disappeared, rightly decided to strengthen the presence of the Guardia di Finanza in the remaining external borders - that is, substantially, the maritime borders - assigning to the latter exclusively tasks of public order and safety at sea, in addition to the consolidated activities of economic and financial police (without prejudice of course to the powers assigned to the Coast Guard).

With the aforementioned decree, the legislator also arranged for the State Forestry Corps to merge into the Carabinieri, without prejudice, as far as this is of interest, to the functions relating to mountain rescue; the latter were, in fact, attributed to the Guardia di Finanza, with the unification of the Alpine Forest Service (SAF) in the aforementioned SAGF

If this choice can be seen as an economic logic, I believe that it nevertheless appears inconsistent with the reorganization of the police forces within the national territory, which favors the use of the State Police in the provincial capitals and of the Carabinieri in the remaining territory.

Now, if we consider the scarcity of provincial capitals in mountain areas and add that the Arma has also been assigned tasks in forestry and environmental matters, we can well understand the inconsistency of the legislator's choice to go and strengthen a (albeit renowned) mountain rescue department within an economic-financial police force. On the contrary, in my opinion, it would have been more coherent if the legislator had delegated to the Carabinieri the task of the only "Mountain Police" (just as the task of the only "Sea Police" was delegated to the Guardia di Finanza). ) by transferring personnel, vehicles and infrastructures belonging to the other police forces and assigning them the following tasks on a preliminary or exclusive basis:

With the hope that this mine can contribute to the opening of a debate on the subject, I offer you

Dear, I read with sincerely dismay Mr. Paolo Todeschini's letter about the Alpine Rescue. I have been present in the statistics as "occasional rescuer" laws, goodwill mountaineer around in his own business, who seeing other mountaineers in difficulty supports, or starts, rescue operations waiting for regular rescuers who also goes remembered, in many cases they are civilians. And this is the point, there are things that you can't do competitions or train yourself that you can't do before but after: collect pieces from other mountaineers, or have to go and do rope maneuvers that in a moment of mental health will you would refuse but since there is another that is leaving us the strasse in the end you do it NOT they are things that you learn, or you know how to do it or not. Then, if you can do it, take regular training to perfect the INNATA dowry.

The mountain rescue is rescue of people in extreme conditions, in Italy it works well thanks to the sacrifice of many civilian volunteers and many soldiers who volunteer for this ... to get themselves done 'sti bureaucratic tricks of the skills, of the "mountain police "and other absolute uselessness let it loose - what do you think?

The mountain traditions are everything, if there is a tradition in a certain body, in this case the Finance, let it be.

The carabinieri have an important and fundamental role of garrison of the territory and that is to be reinforced! Example, I have a barracks of the same at the top of my street ... one day at the crossroads at the base of the street big accident with injured (luckily all then in place) the carabinieri did not come from the barracks of my country but from the most downstream (!) I discovered that there is a lack of personnel (!!) and the barracks are not always with soldiers inside (!!!) ... here, let's work on that - let's hire more for territorial control!

Dear Director, I would like to reply to Mr. Claudio De Diana's reply, to my letter entitled "The Carabinieri as the only mountain police?", Which on this occasion I thank for contributing to the debate.
I consider it appropriate to make some clarifications: the proposal I put forward certainly does not intend to question the fundamental contribution of the numerous volunteers who collaborate in mountain rescue activities.
Instead, it wants to fit into the wider debate concerning the division of the specialty sectors between the different police forces and the territorial articulation of the same.

This proposal starts from the observation that the Arma dei Carabinieri is already the prevailing police force present in the mountain areas.
This presence has increased - and is likely to increase further - following the entry into force of Legislative Decree 177/2016, which provides, inter alia:
- a rationalization of the police forces in the area, favoring the use of the State Police in the provincial capitals and of the Carabinieri in the remaining territory;
- the absorption of the State Forestry Corps (Corps particularly present in mountain areas) in the Carabinieri.
Mr. De Diana states that mountain traditions are important, so if the specialty of the Alpine Rescue traditionally belongs to the Guardia di Finanza, it is right that it should remain with that body.
I would like to point out that the Alpine Rescue is not a specialty that traditionally belongs only to the Guardia di Finanza, but also to the Carabinieri; this is precisely the consequence of the particular territorial articulation of the Carabinieri Corps.
*
As can be deduced from the historical report present on the Carabinieri institutional site, the "Carabinieri of the mountain" were born with the Arma itself, like the traditional "on horseback" units and "on foot" units.
In fact, when in the distant 1814 - within the framework of the reconstruction of the Sardinian Army - the Carabinieri Corps was established, the territory of the small Savoy state was constituted for 70% of its extension by mountain areas: it included, in addition to the western sector, also the Savoy. Thus the need to assign the carabinieri capable of acting in the specific environment and capable of withstanding the rigors of the climate, to the hundreds of Stations deployed in the Alps and to protect those populations, was imposed from then on. as well as the labors of long patrols in harsh and difficult terrain.
For this purpose, the military, who after the training period had to be assigned to the "mountain stations" were chosen among those native to the alpine areas.

The stages that led to the unification of Italy saw the multiplication, with the expansion of the national territory, of the number of "mountain carabinieri" who were thus assigned to the Alpine and Apennine areas gradually acquired in the territory of the State.
The problem related to an organic specialization in the sector was solved in the 1922, when the General Command of the Weapon, in order to adapt the ordering and operational line to the increased multiple institutional needs, also depending on the means made available by the technique, established the paintings of skiers including the carabinieri who had been particularly and specifically trained.
After the Second World War, following the significant increase in tourism in mountain areas, the operational commitments of the Carabinieri of the Alpine and Apennine stations in rescue and rescue operations were accentuated.
In this context, in order to ensure the operational departments a contingent of skiers and rock climbers on an annual basis, an Alpine School of the Arma was established in Monte Bondone (Trento). In 1968 it was transformed into the "Carabinieri Alpine Training Center" based in Selva Val Gardena (Bolzano). As of this year, the aforementioned Center has its own branch in Auronzo di Cadore (BL) at what was previously the National SAF School of the State Forestry Corps.
From the aforementioned Training Center all the "carabinieri of the mountain" are born, that is, skiers, rock climbers, mountain rescue workers and avalanche teams.
As proof of the abilities of the elements that come out of this Training Center, it is worth remembering that four of the five members of the Weapon who participated in the historic "Italian Everest 1973 Expedition" had attended the "rock climbing course" organized by the same.
Finally, it seems appropriate to highlight that, following the absorption of the State Forestry Corps into the Carabinieri, the METEOMONT Service - i.e. the national snow and avalanche forecasting service - is now guaranteed by the Carabinieri in collaboration with the Alpine Troops Command and the Meteorological Service of the Air Force.
*
In conclusion I consider it desirable that:
- the defense of the mountain areas (adequately strengthened) is entrusted exclusively to the Carabinieri, with the exception of the provincial capitals where the State Police may also be present, in compliance with the provisions of art. 3 of Legislative Decree 177/2016;
- a specialized unit is set up within the Carabinieri Corps, in which the "Mountain Carabinieri" (including the Forestry Carabinieri who guarantee the Meteomont Service) as well as the Alpine Rescue of the Guardia di Finanza (SAGF) ​​are brought together.

(Photo: Arms of the Carabinieri)

The Igea operation is the intervention plan implemented by the Ministry of Defense to increase the capacity ...
2470
Read

On Sunday 11 October a friend left us, com.te Aldo Locatelli. In just over a month he would have completed his ...
1646
Read

Dear Director, I have enormous respect for Senator Liliana Segre. However, listening to the echo of his recent speech ...
1664
Read