The cursed infamy of the Foibe 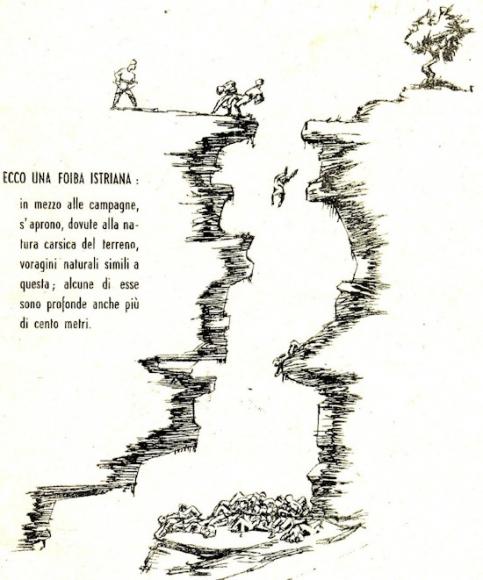 Have you ever entered a karst cave? The air is suffocating, small tunnels are the antechamber to large chambers dripping with putrid water and reddish mud, the humidity is intense, the smell of wet earth penetrates you deep; these caves punctuate the two shores of the Adriatic from Trieste to Vlora, from Venice to Leuca, walking in the Mediterranean scrub forests on either side of the narrow sea seems to never change scenery, inland the pine trees leave the place to holm oaks, oaks and ferns, they are hard, difficult to live lands that find their own redemption in the sea and in fact always come from the sea the civilizations that have hardly tamed them. The Greeks of the 10th century BC, the Romans then and finally Venice; always the sea in the DNA of these lands, always the Italian people ready to break the rock with their own sweat and their own blood. Too long would be the historical trace through which to tell the Italianness of these places, it will begin and end by the epilogue, the tragedy of the peoples of Istria and Dalmatia.

It was the 8 September 1943 armistice when every certainty, structured in over a thousand years of history, will start to wobble, the Italian people master of the other side of the Adriatic had resisted the infamy of the Treaty of Rapallo, the loss of Italian river, to the Dalmatian sale in the name of the reason of state, but Istria no! The heart-shaped peninsula that stretched out towards Italy remained redeemed: Pola, Capo d'Istria and again Zara, the dozens of islands that, as the legend recounts: God launched on the earth at the end of his creation, still bent over the Italian tricolor, there was still a new infamy lurking, Italy defeated was humiliated and to do this the Anglo-Americans did not hesitate to arm the executioners of Tito, bloodthirsty partisans who in the name of one tribal spirit, anchored to the most total incivility and disguised as a syncretic and anti-historical panslavism in socialist sauce, humiliated and exterminated hundreds of Italians, acted without human pity, but with the sole intent of predating a paradise of rock and red earth that until the arrival of the Gentiles of Rome was a hell and came back to it as soon as the barbarians from the woods put their hands on it.

In this heinous crime, the most petty role was played by his accomplices, all Italians, all partisans, all ruling class who not only looked with indifference, but with complacency to the massacre of the innocent, but helped mortify the survivors and was the 18 Warehouse of the old port of Trieste, the slaughter of milk thrown on the tracks and the accusations of fascism to who was only an Italian, to arrive at the sterile and infamous denialism of our days.

The excuses are not enough, the ceremonies are not enough, nor the plaques and the street titles to wash the conscience of the many, too many that yesterday as they were stained with atrocious indifference, this is a sin that nobody will ever be able to wash away.

The land of Istria is red, it's cold, it gets stuck on you and the more you try to remove it the more you knead, while the karst rock like a razor cuts your soul first and then the skin when you try harpoon to avoid falling into the abyss of the evil done.

If they were brave they would kneel first on those chasms in the ground and then they would throw themselves inside, as in an apotropaic rite of human sacrifice, but their fathers and their grandparents were not brave yesterday, as their children could be.

Certainly something could be done, for example to remove that infamous written innate to Tito on Mount Sabotino, to demand formal apologies from the Slovenian governments, Croat Serbian for the infamy suffered, to bring to justice the revanchists of the barbarity titina and return to the heirs of the exiles the properties confiscated, it would obviously not even a billionth of the "just" compensation, because the broken lives, the lost affections have no value, but would give a strong signal and place Italy outside a gray area in which it has slipped for the cowardice, greed and the shady interest of a few.

Have you ever entered a karst cave? The air is suffocating, small tunnels are the antechamber to large rooms dripping with putrid water and mud reddish, seem the description of the conscience of those who have allowed, defended and covered the slaughter of the foibe and the Istrian and Dalmatian exodus.

I have been reading you for several years with great interest as your articles delve into important world issues ...
6089
Read