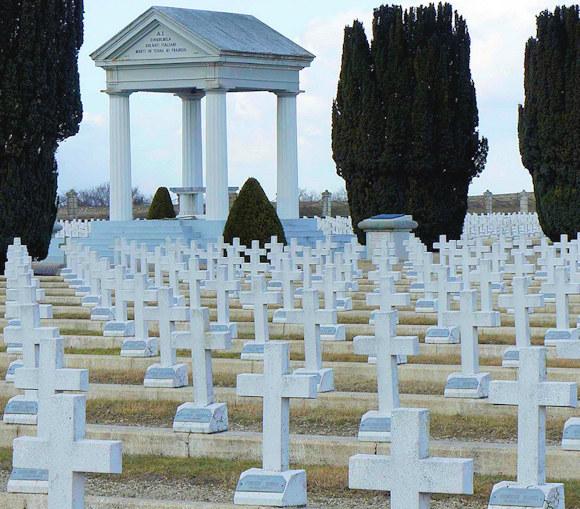 The glories of the centenary of the end of the Great War are over, speeches and ceremonies are no longer on the agenda, the veterans are now all gone ... the history remains, the remains of the battlefields and the war cemeteries that still welcome today the remains of our soldiers who died during the Great War.

And it is about these places of memory that I want to talk to you, not about those that everyone knows that are in Italy, visited by school groups, tourists, gun associations or simply curious. I want to tell you about those located in France as the Italians fought in France, for France and for the final victory during the Great War.

A bit of history:

France at war since 1914, from the earliest days accepted volunteers led by Ricciotti Garibaldi and his sons into the ranks of the Foreign Legion. This department called "the Garibaldina Legion" fought in the Argonne area where it distinguished itself for courage and self-denial. The dead were numerous and France recognized the Garibaldian Legion his essential participation in the fighting with his honor the most prestigious the "Legion of Honor" conferred on General Ricciotti Garibaldi.

In 1915 Italy entered the war alongside France which, thanks to the railway lines Nice - Genoa and Mondane - Turin he sent support of men and material that allowed to reinforce the front and leave again towards the destinations of Trento and Trieste.

In 1918, after countless and deadly offensives and counter-offensives, the French president G. Clemenceau asked General A. Diaz for help in men. 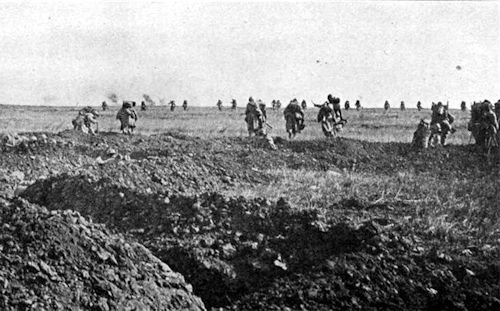 The 2nd Army Corps, under the command of General Alberico Albricci, strong in the brigades NAPOLI, Salerno, Alps e Brescia he was transferred to the front of the Marne. Thus it was that 40.000 men found themselves on the bloodiest battlefields of France bringing their humble and courageous contribution to the Victory of the Allies on 11 November 1918.

Many Italians died on the front for the defense of Epernay and on the equally deadly one of the Chemin des Dames (b / w photo), others, wounded, perished following their wounds. Their remains, often not identifiable, were grouped in different places that still impress us today and make us meditate on history.

I have reviewed a number of places of memory, but perhaps others still exist, now lost in the maze of collective memory or, thanks to the action of family members, extinct with the repatriation of the remains of their loved ones.

Bligny (opening photo), near Reims is the largest and most majestic Italian Military Cemetery in France. This site is divided into 2 parts: one, the actual cemetery, houses the bodies of about 4421 fallen, of which 1366 remained unidentified. Here also rest the remains of the Italian volunteers enlisted in 1914 in the Foreign Legion who formed the Garibaldian Legion, the other is a land that has remained intact as it was at the end of the war and that makes us meditate on the living conditions of the soldiers. 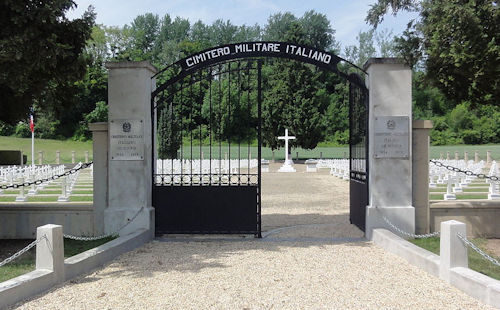 Another site is located in Soupir (photo), a small village in the Aisne plain, under the buttresses of the hills that protected the Chemin des Dames. This village, destroyed by the enemy to make it a fortified camp, was liberated by our soldiers of the 76th Infantry Regiment on 1918 October XNUMX. In Soupir you can also visit the German and French War Cemetery, but it is in Soupir that you can better understand the heroism of our soldiers who advanced in open ground at the foot of hills strongly defended by riflemen, machine gun nests and with artillery support ... "they advanced under a rain of lead". In this cemetery, currently undergoing rehabilitation, 592 soldiers rest.

Other recollection sites are located in Ivry, in the Paris region where 4 dead are resting in the Italian Military Memorial and, in the other cemetery of the city, 37 fallen are in the Military sector, and in Labry where 123 of our soldiers rest in the International Military Memorial fallen on several fronts.

Others rest in various municipal cemeteries such as in Metz in whose cemetery, in Military box, 91 soldiers lie or in Lyon with 71 in the cemetery of La Guillotiére and 66 in that of Doua. Dijon counts 14 dead, Cannes, Antibes, Rouen ... These cemeteries most likely collect the remains of wounded who succumbed in the various places of treatment or convalescence.

About 5.500 remains of fallen Italians who died during War 14-18 for the defense of France, the Honor of Italy and the Victory of 11 November 1918 rest in France.

Without knowing it, these glorious anonymous heroes brought to the land of France not only the values ​​of the Italian Risorgimento, but also their self-denial, their courage and their adaptability to tactical and combat situations different from those in which they had been trained.

Their Sacrifice allowed the Allied Victory on November 11, but also, by engaging more enemy forces in France, it alleviated the pressure on their fellow soldiers who remained in their homeland and allowed the Victory of November 4, 1918.

It is essential to remember that the French Section of the National Alpine Association - ANA honors the Fallen of Bligny and Soupir every year and plans to set up a museum in Soupir in memory of these men of great courage, great self-denial and great humility.

If any reader has memorabilia or documents, their gift will be greatly appreciated.

"In matters of the army and the like we are notoriously poor and, when they call us to participate in missions to ...
2817
Read

Good morning director. I mentioned a famous comedy parody movie from the 601sXNUMX, because the feeling that the case arouses ...
1702
Read

This in the photos is Genova Cavalleria. After a bit of laughter, some offense and why not, the inability and bad faith to ...
31394
Read

The wind of war is a restless wind, which carries with it a dust that blinds reason. The argument is one of those ...
2781
Read

Throughout history the value of the Italian soldier has been immeasurable (and still is today). Numerous are ...
1949
Read

Geopolitics is a transversal discipline that rests on the foundations of mother materials; are brush strokes that ...
4021
Read

I have been reading you with curiosity for some time. You deal with matters of which I believe few can really understand something at ...
5385
Read

We live unconsciously in a bubble, where time flows at different speeds than usual, where ideals ...
1403
Read