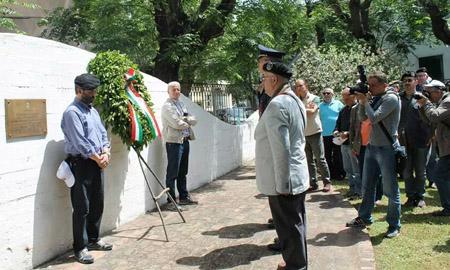 On Saturday 24 May 2014, was held in the city of Salerno, the fourth repatriate of the comrades of the dissolved 89 ° infantry battalion "Salerno", which had as its last location the former barracks gen. Antonino Cascino, today D'Avossa barracks and headquarters of the Guide regiment of cavalry (19 °).

The event, always organized with the precious support of the National Association of Fante - this year by the section. Roma Capitale - was made possible by relying on the Facebook group "Those who did military service in Salerno".

We wanted to meet again this time, to celebrate the "XXXII anniversary of the so-called Slaughter of Salerno", in which a terrorist group of the Red Brigades assassinated two state police officers and corporal Antonio Palumbo (Tuglie, LE), a military conscript of the 89 ° battalion (in the presence of a convoy attacked) and then awarded the silver medal "to memory".

Just the 24 Maggio, infantry party, with about forty friends who served at the Cascino in the '70 and 80 years of the last century, we were greeted at the guardhouse of D'Avossa, by the first marshal Lieutenant De Rosa, today branch clerk in the Guide regiment, and already working at 89 °. Afterwards, we were kindly received by Colonel Diodato Abagnara, commander of the Guides, who, together with Colonel Mario Carusi Abbamonte, head of the Salerno Documentation Center and to Lieutenant Colonel Carlo De Martino (who also belonged to 89 °), there they offered coffee to the shop.

After this welcome refreshment (some of us came from far away ...), "venturing a march ... ...", we went to the parade ground - ahead of the old (and we are well known !!!) M4 Sherman tank, left in Salerno after the landing of the American troops in the so-called Avalance operation of September 1943 - and there we observed the guard deployed with unsheathed sabers and ready for the flag-raising. This view provoked in us the first of two close-ups of adrenaline; the second came when the commander gave everyone the attention and ordered the flag-raising ceremony, on the notes of Mameli's hymn, sung with extreme transport.

At the end, having reached the chapel of Caserma, the comrade don Daniele Peron, now parish priest of the community in Santa Cecilia di Eboli, celebrated the Eucharist, producing (with the charisma that distinguishes it) in a homily that has aroused in us emotion , and then we visited the static exhibition of vehicles (beautiful military engineering masterpieces such as the B1 Centauro armored vehicle, the Puma troop transport vehicle, the glorious Lince and the "revived" Land Rover Defender 90), kindly made available by the commander, and witnessed the presentation of an interesting book on the "history of the Cavalry of the Italian Army", written by the historian Raffaele Cuomo.

Around eleven thirty, we all went to the nearby Victims of Terrorism square, where the monument commemorating the cowardly terrorist ambush of August 1982 is erected. Two of us wore a laurel wreath with a tricolor cloth, bearing the written "The Friends of the 89th Infantry" which, on the notes of the Canzone del Piave, we deposited as a tribute to the fallen of the massacre. The particular moment was then crowned by the trumpet of silence and the notes of the hymn of the 89th battalion, sung by all of us.

After the rustic (and how many memories came to mind !!!), but how much ration was tasted in D'Avossa's unified canteen, we reluctantly took leave of our friends in uniform and from gen. Alfredo Visciani (our company captain in the 89 ° ...) and the assembly broke in a few steps, with the return home.

Filled with the great excitement that we shared this year, we already foresee that 2015 Returnees will not be missing !!!

The 2 June of each year in Italy is celebrated the Republic, that is celebrating the form of state chosen by the citizens ...
2638
Read

Good day. I read, always with pleasure, Online Defense. I take the liberty of offering a very small contribution, I hope ...
13476
Read