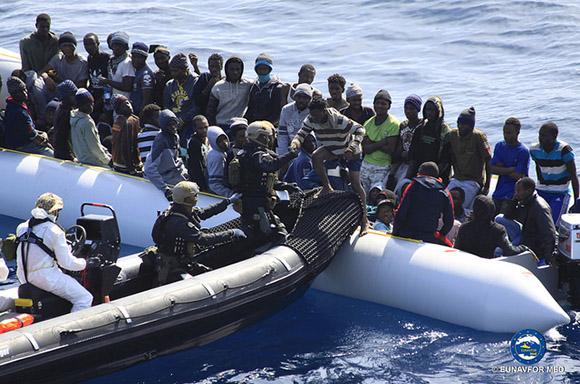 Dear Director, I have not written to you for some time, but I cannot remain silent after reading the article in "Il Giornale" referring to the interview with General Pasquale Preziosa. Then I read that the same article was taken from Libero.it and PRPChannel.com.

I also read an article by Maurizio Giannotti on immigration emergencies on the PRP Channel and on the fact that it was a catastrophe already announced in the distant 1986. De Michelis and Francesco Crispi were already talking about it.

After the meeting of Tallin of the Interior Ministers of the member countries and after the 20 G, how does our Government, "orbo" do not want to understand? As predicted by our politicians with a capital "P", the real statesmen, the danger, or the resource is in the Mediterranean. We are geographically the south of Europe, indeed we are only the south of ourselves.

The final document of the G 20, regarding the immigration emergency, is clear when it states: "the sovereign right of States to manage and control their borders and to establish policies in the interest of national security"And where possible put in the field"global efforts and coordinated actions".

With this declaration, even a child would understand: "you are alone arrange yourselves". Then from Monday we really need to roll up our sleeves and not think about what electoral law to carry on to sit back in Parliament, or worse to think about holidays.

Millions of desperate people, pushed by the militias of the countries bordering Libya and many Libyans are about to be put on strange rubber boats (specially built in China and it is not known how they are transported to Libya) and sent to Italy. So here we welcome everyone and save lives in difficulty at sea, it is not a fault, we are Italians. Then behind, who knows how many are enriching themselves with the smuggling of migrants and persuade local and national Italian politicians to postpone because this is how it must go, otherwise votes are lost.

In the meantime we are helping to make the worst catastrophe for Italy grow. Worse than an earthquake, a tsunami.

We are killing the future, we are killing our citizenship. They have abandoned us all and we do not want to understand it. Alfano continues to make announcements on investments in Libya and promotes the economic forum with Libya. Which Libyan government is interfaced with? There are three different fighters. Sarraj, many see him at the end of his authority. So Alfano, the Italian Government with whom are you talking?

Beyond the beautiful proclamations in favor of our companies investing there, no one really tells what happens there. Libya is only the tip of something bigger as General Preziosa said very well in the aforementioned interview. Libya thanks to the French has become a no-man's and everyone's land after Gaddafi's deposition. Sudan, Chad, Syria and the whole area is in turmoil and everyone wants to do business out of "chaos". China, Russia, the United States and other big names in the world are there but they are not seen and yet in a certain sense they condition events. Italy, on the other hand, with the "wait-and-see" tactic, remains passive and waits, yearns for a change from Europe.

The G20 document was clear: "Arrangiatevi!". In Tallin it was decided to increase funding for the "fund for Africa". Then? move and think about our future generations. Remember politicians, with the immigration emergency the matches of the next general election will be played. Merkel understood this in time, before the September elections, and made arrangements with Turkey to stop migrants on the borders.

I have been reading you with curiosity for some time. You deal with matters of which I believe few can really understand something at ...
4288
Read