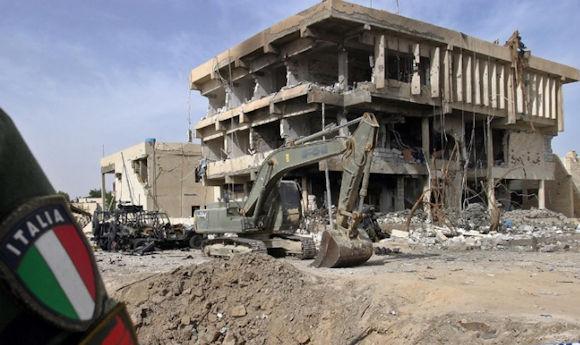 Stano's general case makes one reflect, opens the meanders of consciences, makes society a little weaker, if this is still possible. It will be short with the story and then move on to the point: in the 2003 near An-Nassirya the Italian contingent was located in different points of the Iraqi city with the aim of carrying out activities of territorial control, reconstruction support and local security forces , over time, following various alarms many bases were moved to the suburbs, among those left in the city there was the base Mistral of the Carabinieri, this base was the object, on 12 November 2003 at 10:40, of a sensational attack where Italian and local military and civilians lost their lives.

The then commander of the Italian Contingent (General Stano, nda) subjected to trial was alternately acquitted and sentenced in various degrees of judgment, according to an all-Italian system, however in recent days the Court of Cassation definitively sentenced him to pay compensation in favor of the relatives of the fallen. Here is the point of the reasoning: the first objective of a commander is, like it or not, the fulfillment of the assigned task, the achievement of the objectives set in the mission; the safety of personnel is not to be included in the priorities, simply for the fact that the fighter is the "tool" with which to achieve the objective, therefore it must be safeguarded in the context of eminently practical reasons and intrinsic to operational needs, if this were not the case it would be like riding a bike without the bike itself. In fact, in the principles of the art of war we speak of economy of forces and security, for the reasons set out above, not of protection of force, moreover in the analysis of the mission we examine the combination of time, space and force as elements key, never protection. We repeat, simplify and try to clarify: the bulletproof vest is worn not because the priority is to save the skin, but simply because death or inability would cause the failure to achieve the set military objectives. All this clearly should not be confused with cynicism because in these lines we are dealing with a theme connected to the application of civil law on a war event (oxymoron ed.), Another thing would be if we were talking about military ethics and conflict ethics, then if by cynicism we mean the self-sufficiency of Diogenes then it would be good to be cynical.

Going further into the philosophical speculation that perhaps can be considered the appropriate context in which to seek answers on the question we will say that Socrates was a teacher of virtue, a democratic and defender of life, however for a greater good, adherence to the laws of poleis, he decided to drink hemlock. The military also has a higher duty and is that of the defense of the State united to the salvation of citizens, after all it is its hemlock, there is a social contract of ethical dimensions to which it must respond and against which it has sworn. Within the military community, the most exposed to the aforementioned duties, the most avid hemlock drinkers, remain the commanders who have the task of presiding over military duties and if necessary imposing them on the armed society. Here it is not a question of safeguarding the production system of a company, the Army, contrary to what one would like to believe, is not a company, in fact, if previously the term instrument was used to indicate the military, it was done. in quotation marks, aware on the other hand that the Scriptures also give the attribute of instrument to the Holy Spirit.

It is understandably difficult to digest this topic, but it is believed that these issues should be dealt with thoroughly and emphasized, even in schools, precisely in order to form conscious citizens and thus avoid creating social disintegration, but Italy, as we know, is the country of the Guelphs and the Ghibellines and at this point it is wandering.

There remains in all this the fallen who will never come back, the torment of a commander and a compensation for damages that will not make anyone's joy. Amen!

One of the main lessons learned from the war in Ukraine is the need to enhance vehicle protection ...
8763
Read

The war in Ukraine saw the consecration of the drone as a fundamental and indispensable weapon system of the field ...
25725
Read

Good day. I read, always with pleasure, Online Defense. I take the liberty of offering a very small contribution, I hope ...
13253
Read

The war in Ukraine highlighted the serious shortcomings of the Italian Army in the field of armaments in ...
13286
Read