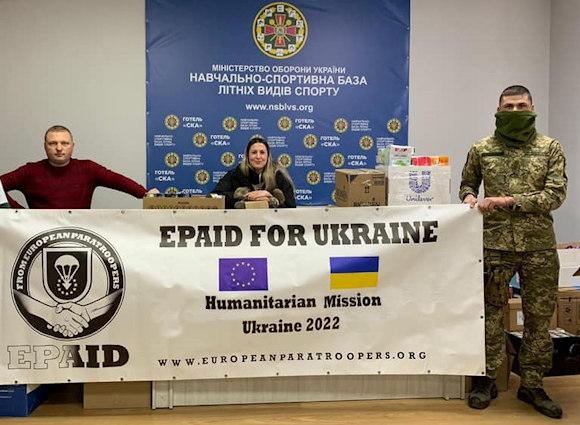 The humanitarian mission EPAID FOR UKRAINE continues unabated, led by the European Paratroopers Association (EPA), the international non-profit organization that associates military paratroopers on active duty, on reserve and on leave from the European Union, NATO and Friendly Countries , founded and directed by Giulio Festa, former paratrooper of the “Folgore”.

The EPA has been conducting humanitarian initiatives in Ukraine since 2019, where it had an operational headquarters in Lviv.

With the outbreak of the conflict, the EPA temporarily left Lviv to move to Poland where it set up a first collection point in Korczowa-Krakovets, near the border, for the storage of emergency goods to be sent to Ukraine, and to be distributed. partly also to refugees on Polish territory.

"In two weeks we have already delivered around 24 tons of emergency aid to the Ukrainian authorities and humanitarian institutions, mostly medicines, medical equipment, blankets, clothing, long-life food and basic necessities, thanks to the hard work of our volunteers, from all over Europe and to the generosity of our supporters " explains Giulio Festa, president of the association. 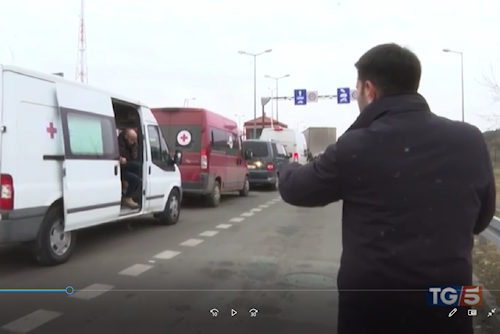 A last load, the fourth since the start of the humanitarian mission, containing 2 tons of emergency goods, left from the association's operational base in Tarnow (Poland), was transported this morning to Lviv (Lviv) with two EPA vans and it was handed over to the Military Sport Center (SKA), where displaced people from war zones are housed.

On 12 March it was the turn of a third load, containing 2,5 tons of medical equipment and instruments and medicines to be sent to hospitals and first aid centers, as well as basic necessities, mainly intended for children (food, baby food , diapers and personal hygiene products). The aid was delivered to the Dobrosyn-Mageriv Regional Defense Administration and the Lviv Military Sport Center (SKA), where 85 children evacuated from war zones are housed.

On 6 March, a second cargo of 3 tons of emergency aid was transported in three vans of the association to Dobrosyn-Mageriv (Lviv), where it was handed over to local authorities.

A first load of 10 tons was sent to Ukraine on March 5, with a truck of the Swedish Mastab Transport, containing medical equipment, medicines and other medical devices, supplied by Meds, MedOne, Prodoc and organized and coordinated by our Lithuanian paratroop brothers and swedes. The load then, once divided into smaller batches, was distributed to the field hospitals, which at the time had a greater need and urgency. 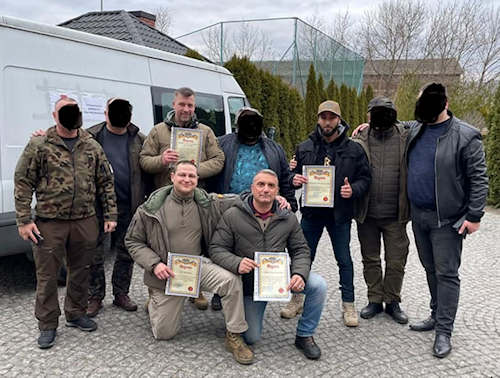 Another 6 tons of humanitarian aid collected by the EPA's operational detachment in Spain was transported on Thursday 6 March to the Community Government Depot in Madrid. From there the materials were uploaded together with those collected by Cáritas Castrense and sent directly to Romania. to be distributed to Ukrainian refugees housed in refugee camps.

Meanwhile, the EPA has also set up a guesthouse in its operational base in Poland to host volunteer operators from Sweden, Spain, Greece, Denmark, France, Italy and Lithuania, who will be involved in organizing aid also in the coming weeks.

"We are working hard, but to continue operating we need the support of those, ordinary citizens or institutions, who want to make it possible to continue our humanitarian project" is the appeal of Alessio Fasano, coordinator for Italy of the European Paratroopers Association.

Meritorious supporters will be awarded the EPA's Cross of Merit.

Those who want to support the EPAID FOR UKRAINE campaign can connect to the site https://www.europeanparatroopers.org/about-us/donation.html.

The comparative examination of the weapon systems of our three armed forces reveals a serious imbalance. While the ...
3624
Read

One of the most urgent programs for the renewal of the equipment supplied to the Italian Army is that ...
24648
Read

As is known, NATO was born (pass the tongue twister) in 1949 as a mutual defense organization between Belgium, Canada, ...
3404
Read

One of the main lessons learned from the war in Ukraine is the need to enhance vehicle protection ...
14362
Read

The war in Ukraine saw the consecration of the drone as a fundamental and indispensable weapon system of the field ...
27053
Read

Perhaps guided by mysterious genetic messages I live the recurrences of May 24, June 2 and November 4 in ...
6332
Read

The Leonardo Company (formerly Finmeccanica) is presenting its ...
3460
Read