Home Recommended Letters to the Director Commemoration of the 74 anniversary of El ...

Commemoration of the 74 anniversary of El Alamein. The party of the paratroopers begins, between past and future 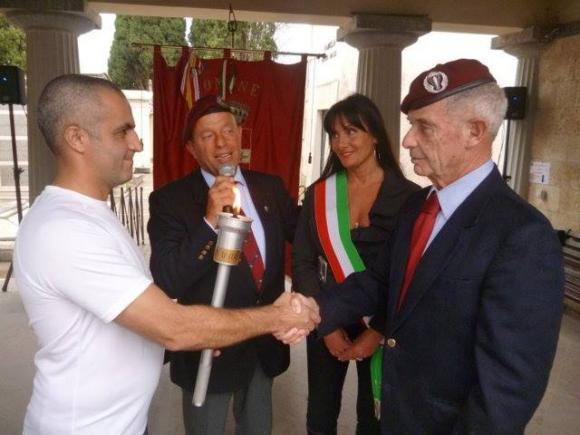 The shrine of the paratroopers of the School of Tarquinia, located inside the cemetery of the town, also received this year the traditional testimony of affection and faith by the dell'ANPdI paratroopers. Paratroopers from the sections of Tarquinia, Viterbo and Rome took part in the ceremony. This year, for the first time in the history of this event, the ANPd'I of Viterbo, to remember that this city, like Pisa and Tarquinia, was also the seat of the Military Parachuting School, wanted to run an unprecedented relay between Viterbo and Tarquinia in order to underline the ideal continuity that binds the three cities. This relay segment, run by a group of torchbearers from the Viterbo section, reached the Tarquinia cemetery to pass the baton to the first torchbearer on the Tarquinia - Pisa section.

The lighting of this torch was preceded by a short but heartfelt ceremony during which Mrs. Maria Elisa Valeri, councilor of the municipality of Tarquinia, spoke, representing the mayor. The commissioner, in addition to remembering with intense emotion the fallen whose memory was celebrated, did not fail to communicate, to the moved astonishment of those present, that she was the daughter of a paratrooper. The president of the Tarquinia section, Giulio Ciurluini, also recalled the "boys" of Tarquinia and El Alamein, underlining how their sacrifice at the time continues to represent, for all of us, an inalienable heritage of ideals and history. The president of the Rome section has, in short words, intended to refute the cliché according to which paratroopers are considered obsolete nostalgics, he remarked on the contrary that they are women and men who are prosthetic body and soul to the future, confident of being able to give a precious contribution of ideality for the creation of a better tomorrow, precisely by virtue of those solid and vigorous roots represented by the legacy of the history of our specialty. Keeping those roots alive and vital represents the surest guarantee of the vigorous growth of new branches, with evident reference to the young people who were about to start the relay. The lighting of the torch was, as always, a moment of particular general emotion, to which the sudden departure of the first torch bearer intentionally wanted to cut the road.

One of the main lessons learned from the war in Ukraine is the need to enhance vehicle protection ...
8806
Read