Home Recommended Interviews Interview with the director of the Centro de Educ ... 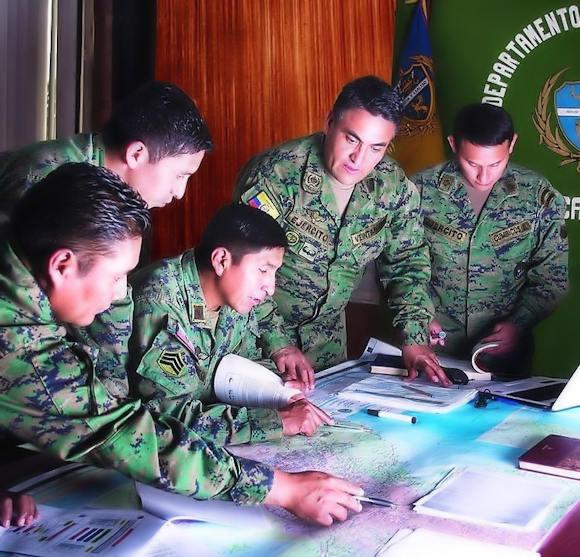 "The Army, as a permanent institution in a state, must be flexible and adaptable to the changes that society requires, mediated by technology. Military training must therefore be transformed to meet social needs in terms of security and defense, while maintaining a continuous training of his soldiers. "

What are the challenges and prospects in the military training of the Ecuadorian Army?

Traditional education stems from a long history born with industrialization, in a behavioral educational model that has remained static over time, clearly military education has the same origin.

The military, as a permanent institution in a state, must be flexible and adapt to the changes that society requires, mediated by technology. Military training must therefore be transformed to meet social needs in terms of security and defense, while maintaining continuous training of soldiers. The answer is therefore that the challenges are to maintain an armed, prepared, updated, efficient force in an unstable, uncertain, confused and ambiguous environment, where the threats have become international. The way this will be achieved is through a transformation model in which technology will be one of the most important axes, supported by capacity generation and an appropriate legal framework.

The military training of the future must be participatory, knowledge must be generated through social constructivism, exploiting the experience of soldiers in operations, to create knowledge through information management technologies in a knowledge society.

Education must be completed by highly qualified teachers who use educational platforms supported by simulators for training, intelligent classrooms, systems that allow immediate answers, using big data and artificial intelligence, suitable for the rigors of military life, always present to be integrated into any type of portable device.

However, military education must be guided by the practice of values ​​and humanity that only the teacher can provide, through any available means of communication.

The military professional of the future must have the following requirements:

• To operate in space and in cyberspace;

• Develop investigative skills in the areas of security and defense;

What is the main mission of the Terrestrial Military Training and Doctrine Command (CEDMIL)?

Today our Army is a pioneer in distance education, as the systems have been developed through the Armed Forces Academies which have been enhanced in this transformation process. The CEDMIL or Military Education Center, is a highly technological unit responsible for the development of three main projects: hybrid education, military teaching and strengthening the English language for the military. CEDMIL offers online pedagogy courses for all military teachers, training and providing technical support to the entire military education system. Participate in the development of land capabilities, through military education, land military doctrine, historical studies and training, in order to contribute to the defense of sovereignty and territorial integrity, support for public and state security.

CEDMIL is a Military Education Center: the mission is to teach effectively with an efficient use of technology, mto improve the professional skills of members of the Armed Forces in the educational and cultural fields - both face to face and remotely - in a systematic and methodological way to ensure efficiency and quality in the development of the teaching-learning process.

The pillars of the Direction of Transformation of the Earth Force?

There are 10 in the model, all important:

What is the most advanced transformation process?

Surely the pandemic has accelerated many processes, I believe that one of the most advanced is distance education, since today we are with synchronous classes through videoconferencing platforms such as Zoom, and asynchronous through educational management systems such as platforms based on Moodle.

Similarly, media convergence is used in a hybridization of military education.

Can you explain to me the MOOC (Massive Online Open Course, ed) mode?

Knowledge in virtual platforms must be precise, compact, goal-directed, so these huge online course formats have been developed to take advantage of technological means and not see distance or time as limits, but rather as opportunities.

The MOOC courses allow students enormous access to train themselves on specific topics whenever they want and wherever they are, thus solving two variables: the need of society for a greater perception of safety through units with a greater number of staff and the need for continuous training.

MOOCs are courses designed to be completely self-contained and to motivate soldiers to be prepared in many areas, not just technicians from the military profession, but also on topics such as history, cyber security, health and safety, among many others.

Do companies and universities participate?

The realization of the project requires the hiring of private companies specialized in topics such as educational management systems, an administration that we now carry out independently after an efficient transfer of knowledge.

Universities have participated in the training of our team through courses in both training and technology, CEDMIL manages these two large areas of knowledge, which are replicated in our educational system through the courses mentioned above.

You wrote that Jean Piaget stated: "The main goal of Education is to create people capable of creating new things and not simply to repeat what other generations have done." Is this the challenge of the future of the Ecuadorian Army?

The ultimate goal of all education is to create self-sufficient people, who can adapt to the reality they live in and who can be able to solve complex problems.

Let us remember that today we are preparing the future Army Commander General of 2033, in an environment unknown to us, therefore, our obligation is to prepare efficiently to generate their own solutions. 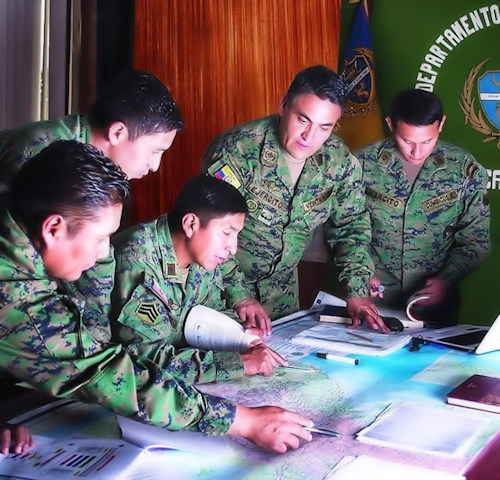 The educación tradicional comes from a broad historia nacida en la industrialización, with a conductist educational model that has permanent estática in el time, evidently the educación militar holds este mismo origen. En la era del conocimiento, en donde lo único permanent es el Cambio, no podemos estar ajenos a la realidad en la that the technology has modified the definitive form todas las interacciones humanas, the comunicación has changed, changing. El Ejército, as a permanent institution in an estado, must be flexible and adapt to the changes that the society requires, mediados por la technology. The military education must transform it so much to be able to take care of social needs in terms of security and defenses, which keep a continuous preparation of sus soldados. La respuesta es entonces que los desafíos son maintain una fuerza armada, preparada, actualizada, eficiente, in an environment volátil, incierto, confuso y ambiguo, en donde las amenazas se han internacionalizado. The way it is logrará is a través de a modelo de transformación in which the technology will be one of the most important, apoyados for the generación de las capacidades y un marco legal acorde.

The profesional militar of the future must be contar en su perfil de:

What is the principal mission of the Comando de Educación y Doctrina Militar Terrestre (CEDMIL)?

What is one of the ejes importantes of the Dirección de Transformación de la Fuerza Terrestre?

Usted wrote that Jean Piaget said "The main objective of the education is to create personas capable of creating what is new and not simply repetir the other generaciones hicieron" es esto el desafío of the future of the Ecuadorian army?

When you are lucky and have the opportunity to interview a Middle East expert such as prof. Uzi Rabi would be ...
1154
Read

NATO Defense College (NDC) celebrates its 70th anniversary. On November 19, 1951 it was officially established in ...
579
Read

During the visit to Varignano, Difesa Online had the opportunity to interview Rear Admiral Massimiliano Rossi ...
8154
Read