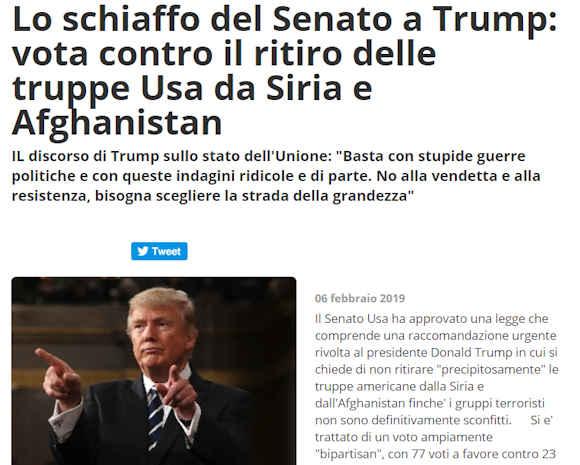 This morning the first radio newspaper I listen to 7 comes out with a "slap in Trump" by the American Senate. As soon as I turn on the laptop I read the same title as a comment of the opposition (by a large majority !!!) of the US Senate to the withdrawal of troops from an Afghanistan far from pacified and free from terrorists.

Why should we speak of "slap", then imply a "political" evaluation, when the sense of action is purely logical and "moral"?

Afghanistan is NOT pacified and the blood of thousands of Americans has been poured into missions that go on for 18 years. In the US Senate there are people who know well what a mission means and when it can be concluded (or lost). Can a political interest herald a military withdrawal, perhaps to recover some percentage points in the polls? The answer can only be negative.

Fortunately we live in Italy, a great and responsible country able to make System in which they do not exist boutades last minute - decided without consulting the military in Afghanistan still working today - to try to stop an announced electoral collapse or avoid an inevitable government reshuffle.