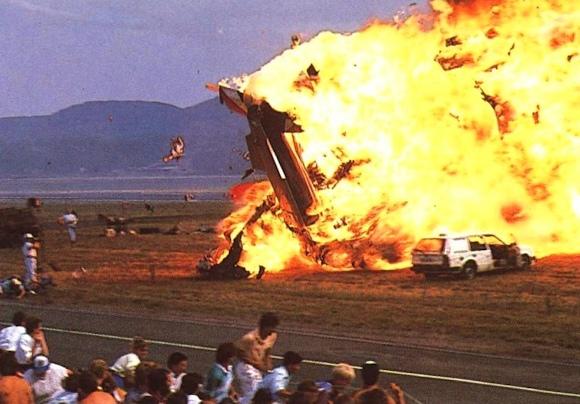 Anyone who has in the heart the values ​​of professionalism and abnegation of the Air Force or who has the passion of flying can not fail to remember that damn Sunday 28 August 1988.

The same applies to those who feel Italian only on Sundays, because that plane crash has linked in a single eternal fate of tragic pain, simple enthusiasts and military pilots among the best in the world.

It had to be an afternoon of leisure and national pride for our compatriots living in Germany, instead 3 among the best Military Pilots in the world and 67 fans among the public joined for eternity in a fireball shot by televisions and newspapers Worldwide.

The dynamics of this that remain among the most serious air accidents that occurred during an acrobatic exhibition have been repeated to us thousands of times and it would not be our wish to repeat it. However, making information also means allowing those who have never heard of it before to have an objective and analytical description.

All happened in just 7 seconds when the Italian acrobatic team Frecce Tricolori was preparing to complete the figure called "Cardioide", a figure in which the 10 Aermacchi MB339-PAN were divided into two minor formations (called "sections") during a vertical ascension, to then draw a heart in the sky in front of the audience during the descending phase. This ended and with an intersection in the lower part that also involved the soloist, coming in front of the audience.

A figure historically among the most appreciated and of great scenic impact because this intersection took place exactly in the middle of the "display line" at the point closest to the public. In Ramstein that day, fate was overrun, because of all the possible occasions to give birth to a tragic accident, he chose the worst moment.

The budget was obviously catastrophic. In addition to the three pilots, among the best in force at our Air Force and the world, 67 lost their lives (51 the day of the accident and 16 in the following weeks), mostly Germans: among them also many children. The injured, hospitalized in 46 hospitals, were about 1.000, of which 347 serious.

Videos and photos made and still today make news around the world and for this reason, safety measures in air shows were subsequently reviewed, removing the public from the area of ​​acrobatic evolutions.

Nowadays everything happens in complete safety for the public, nevertheless our Acrobatic Patrol has managed to carry on with its unchanged spectacularity your task as Italian ambassador in the world, provoking everywhere unanimous appreciation of excellence.

We stop here, respecting those who left their earthly existence that day for an ideal of passion and sacrifice. It does not matter if they were soldiers who have spent years of training and sacrifice, or children who had given up on an afternoon of vacation to go see an ideal of perfection and passion: all have left in pain this land and their loved ones and by us goes the most sincere condolences, still unchanged at 30 years away.

Let me paraphrase Rhett Butler and state that, unlike other analysts, I believe that of ...
9672
Read

Online Defense readers often ask me if it would be no less painful for Ukraine to give up and accept a ...
5154
Read

102 days of war brought to light many aspects of our country that were easily imaginable or we had ...
5078
Read

Dear reader, For nine years Difesa Online has been fighting with its strength together with the help of some readers and sponsors. The...
6156
Read

Last week there was a controversy over the downsizing (decided by the previous government) of the military ...
3661
Read

For over a month the news concerning Fincantieri, the most important shipbuilding group in Europe, ...
14048
Read

These days Ukrainian fighters are receiving arms supplies from NATO and other countries of the ...
10728
Read