Home Recommended Publishing Ministry of Defense or the Minister's Defense? 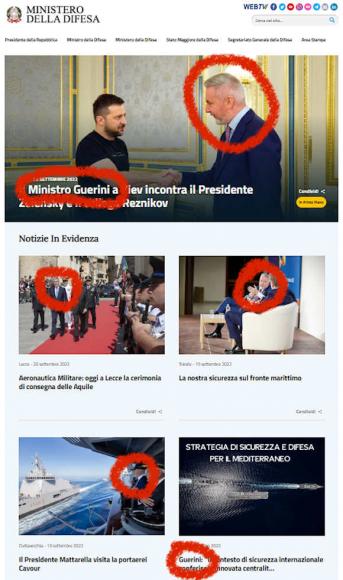 Read today's statement (in evidence!) Of the Defense ...

Il Minister of Defense, Lorenzo Guerini, met President Volodymyr Zelensky and Minister Oleksij Reznikov, his counterpart, in Kiev today. He went to the country at the invitation of the Ukrainian authorities, for a series of talks in the capital, on Minister of Defense he reiterated Italy's support for the country's freedom struggle to protect its sovereignty. Guerini: "Italy will continue to support Ukraine in line with the mandate of the Parliament".

"Today I personally observed, in Irpin 'and at the military airport of Gostomel, the damage to civil infrastructures, a consequence of the Russian aggression, but at the same time I perceived in its fullness the spirit of a people who do not intend to give up to freedom, courageously defending one's own and indirectly protecting that of all ”. These are the words of Minister of Defense, Lorenzo Guerini, today in Kiev.

He went to the country at the invitation of the Ukrainian authorities for a meeting with President Volodymyr Zelensky and with Minister Oleksij Reznikov, the Minister of Defense he reiterated Italy's full support, also underlining the role played by our country from the early stages of the conflict, as part of the international mobilization for the restoration of Kiev's violated sovereignty.

“I was very impressed by what President Zelensky said during our meeting. He was keen to reiterate that Italy, despite the problems deriving from the energy crisis and therefore the consequent economic difficulties, has kept the 'straight bar' on sanctions against Russia and on the firm commitment to support Ukraine. President Zelensky thanked the Italians for the sacrifices that they too are making to defend the freedom of Ukraine "reported the Minister after meeting with the President. "Italy has supported Kiev's efforts to defend itself from the beginning: since last March I signed 4 decrees that ordered the sale of materials, defense systems based on the needs represented by the Ukrainian Armed Forces, the last of which was finalized in July. We intend to continue consistently with the mandate of the Italian Parliament, ”he said Guerini.

During the meeting with Minister Reznikov, the ministers focused on the training activity in favor of the Ukrainian Armed Forces, also in relation to the possibility of a possible European training mission. The Minister of Defense Italian also gave the availability of humanitarian assistance in the medical and health field.

Il Minister Guerini he also reiterated the need to start a concrete path of peace, starting with a ceasefire.

"We are convinced that the path taken, which sees the joint action of political-economic sanctions and military aid, is the only one able to make Putin understand that he will not be able to achieve any military victory, and that the only path to to pursue both the search for an equitable peace. A peace that restores the rights that have been violated ". Renewing, once again, the unconditional solidarity of our country towards Ukraine, the Minister he underlined that "Italy will never leave the Ukrainians alone in supporting against an unjustified aggression, which does not only concern Ukraine, but all those who defend freedom". The visit to Kiev was also the occasion for a tribute felt at the "Wall of Remembrance", a place of commemoration of the Fallen for Freedom, where the Minister Guerini she placed a bouquet of flowers in their homage.

Well, while the party colleagues are intent on trying to collect votes in the last hours of the election campaign, Mr. minister of the Defense, Hon. Lorenzo Guerini - evidently aware of the neutral and primary role of "servant of the state", he has given up on propaganda to go (first time if I'm not mistaken ...) to Kiev!

It is important to underline the spontaneity of the gesture: in fact, in addition tobroad coverage given by all newspapers and television news, in the press release of the Ministry of Defense the term "Minister" (referring to ours) appears only 9 times and "Guerini" just 6.

Ukrainian President Zelensky greeted him in any case with the following words - "I am grateful to Minister of Defense Guerini for this important meeting: the fundamental priority for our country is the strengthening of our armed forces".

One moment! But shouldn't the "strengthening of the armed forces" - with a war 700 kilometers from our border - be a priority for us too?

Minister Guerini, when it came to defending the 2% for the Armed Forces promised to the Alliance for a decade, complied with the request to delay it for a further 4 years (2028!).

But rightly it was necessary at any price to save the government. There was no time to resign ... And then who could have replaced such a trained and courageous politician?

So, Mr. minister of the Defense, Hon. Lorenzo Guerini! I was really undecided on se and possibly who to vote. Thanks to a simple (and eloquent) press release - as I believe all his humble and respectful subordinates - I have no more doubts.

Finally, look at the image of the home page of the Ministry of Defense ... What can I say? The characters pass by, but the toilets are all alike.

The first "international" meeting of the Prime Minister Giorgia Meloni was with the president of ...
3436
Read

With today's oath, in front of the President of the Italian Republic, Sergio Mattarella, the Meloni government ...
6271
Read

In these days the mayor of Pennabilli, a small town in the province of ...
7509
Read