Military acquitted for a neo-Nazi symbol or punished for an ANTI-Nazi banner? 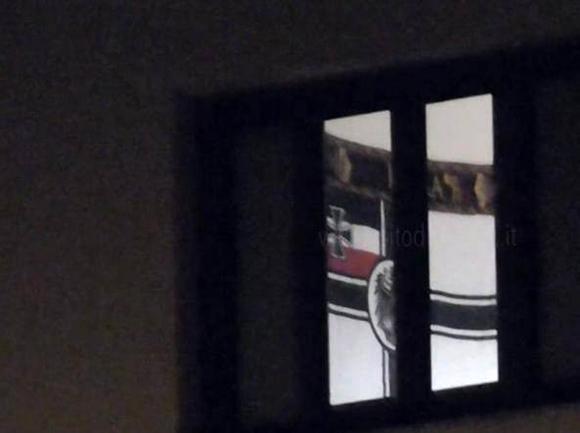 Six months ago a poor carabiniere was pilloried for hanging a historic flag in his room (v.articolo).

When a camera violated the privacy of his accommodation he was snapped in the neck by the media and politics, the one in power and one part of that in the opposition.

The weapon? The military hierarchy - which was supposed to protect its own member from absurd and unjust accusations - had only succeeded in limiting 3 days of delivery the exemplary sanction required for the poor boy of 24 years. Recall that the political and media pressures (especially the unofficial ones ...) demanded the immediate leave of the carabiniere.

On Tuesday, the command of the fifth carabinieri regiment of Emilia Romagna canceled the sanction decided at the time by the command (hierarchically lower) of the sixth battalion of Tuscany. The soldier, in case of confirmation of the sanction, could hardly have entered the weapon in permanent service. The young man immediately argued that, as a history buff, he did not know that this banner was used by neo-Nazi groups.

After two days of easy comments on the media - too many less than those published when the carabiniere was to be hit - it might seem like a happy ending story but it is not, and should not be considered, such.

A soldier has been infamous and condemned "politically and in front of the public opinion" by those who protect and serve daily, for an absurd and ignoble accusation that only the worst bad faith or ideology could have justified.

"Nothing new under the sun" will answer the thousands of men and women in uniform who do not bow to a party card to look for a career shot otherwise unlikely. Valid in Italy as in Afghanistan, Iraq, Libya, Somalia, Niger and so on ...

But no! This time the excessive ostentatious security could have made a mistake that we will not have to forgive: the offending symbol would be an ANTI-NAZISTA symbol!

In the 1939 a singular episode (covered by the German regime of the time) would have consecrated that banner to example of protest and rejection of Hitler's government.

The suicide of the commander of the "Admiral Graf Spee": Captain Langsdorff, breaking with the political directives of the time - and let's repeat it, let's talk about 1939, not 1945 (!) - after rescuing the crew, scuttled the ship which, according to his information, was about to be destroyed by the English fleet. As a sign of rebellion (having contravened the orders of the Führer who had ordered to sacrifice himself with the ship) he committed suicide with a pistol shot after wrapping himself in the flag of the old German Imperial Navy.

A disruptive gesture that was silenced by history? It could be. The answer given to us by the German embassy does not report this dynamic. But six years after the fall, with the bonfires of the texts still smoldering, what document concerning such an episode could have been saved in Germany ?!

However, our research has been confirmed by historians and writers who would confirm the striking gesture of Commander Langsdorff *.

Apparently, in our days, those who love to fill their mouth with democratic values ​​and anti-Nazism may have punished a military for the presence of an ANTI-Nazi symbol in his room.

If Italy worthily honored its soldiers this would be a different country; if instead of celebrating false myths, ...
4326
Read

Today's visit to Taipei, first canceled then confirmed, by the speaker of the House of Representatives, Nancy Pelosi ...
5694
Read

Summer has arrived: it's time to have fun using geopolitics, a "scientific" discipline and not a toy ...
5724
Read

Umberto Eco said, not the last gun at the bottom left (or right in via bipartisan) university graduate ...
2417
Read

Hagiographies are not suited to politicians; the saints are something else, given their exclusive relationship with a ...
2052
Read

Let me paraphrase Rhett Butler and state that, unlike other analysts, I believe that of ...
11218
Read

Online Defense readers often ask me if it would be no less painful for Ukraine to give up and accept a ...
5874
Read

102 days of war brought to light many aspects of our country that were easily imaginable or we had ...
5438
Read