COVID massacres in the RSA and the elderly in phase 2: the deafening silence of Conte 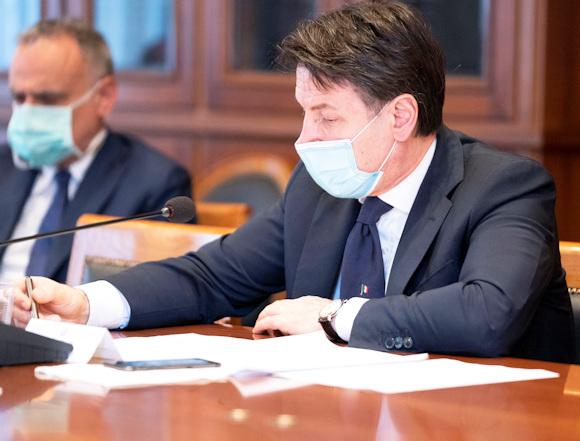 On the one hand there is the WHO, through the mouth of its European director Kluge, according to which "Half of the people who died in Europe from coronavirus were in nursing homes ... the advanced age of patients, their basic health conditions, cognitive problems in understanding and following health and hygiene advice due to intellectual disability or dementia, they are all factors that put these people at greater risk ... Equally worrying are the way these care facilities operate, the way patients receive assistance, which is providing pathways for the spread of the virus. It is important to remember that even very elderly and frail people, affected by multiple chronic diseases, have good chances of recovery if they are well cared for ".

On the other side is Italy, with its politicians looking for media visibility. There is confirmation that "The prohibitions of gatherings will remain, even in homes: we do not allow private parties to be clear", as a measure of protection for all, but not specifically for the elderly, with the latter still ignored as we will see.

The "assembly bans" are the guideline dictated by the prime minister, live on television on Sunday 26 April, on the conduct to be followed between us and our "relatives". Apart from that appearance on TV, it must be said that in the last ten days Prime Minister Conte has been very active: he met the Head of State and the governor of Lombardy, released two interviews (Repubblica and Southern Newspaper), visited the shrine delle Fosse Ardeatine, went to Lodi, Piacenza and Cremona, presided over the launch of the last span of the Ponte sul Polcevera in Genoa and, finally, spoke to the chambers on Thursday 30 April. He was able to wrap himself up on the concept of "relative", as broad as it is far from indicating who needs serious protection. Speaking of people who need special attention, in these ten days Conte has almost always managed to never pronounce those three letters that our readers have come to know: RSA, Residenza Sanitaria Assistenziale. How come this silence? And why is it important to understand this? Why should he talk about it? We will try to explain it in this article ...

Meanwhile, in this same period, Conte hardly ever spoke of the elderly: among other things, in his speech on TV he made no mention of nursing homes or the most fragile people. Too bad because he would have had reason, since over half of COVID-19 victims died in RSA. Among other things, he was a few steps away from him, when the governor of Liguria Toti, in the hours of the visit, explained to journalists that at least half of the positive cases are now found in the RSA, not to mention among the relatives of the guests and of the staff. Conte remained silent.

Once, to tell the truth, he mentioned RSA: it was Sunday, April 19 in an interview with the Journal. In answering the question: "What idea have you got of what happened in Lombardy? Do you think that the management of RSA has played a decisive role? " managed to serve a great level superbrush by explaining that "Lombardy has certainly found itself facing the hottest front of this battle" and, tranchant, that "Any discussion about responsibilities will have to be addressed in due course, nobody will escape from their own". Then, to attract some applause, he also complimented the health professionals: "Now, however, the important thing is to stay by the side of those who fight in the lane every day". Chapeau by the League leader Salvini who in mid-April repeatedly asked for a truce on the embarrassing issue of the Lombard management of the RSA2 arguing for his part that in RSA you die because "The average age is high and it is difficult to intervene".

Conte is silent because the weapon of the nursing homes can be used later in the political area and it is not useful to spend it immediately: after all, there is still a year and a half to go before the election of the new President of the Republic ... his Minister of Health, Hope, Salvini does not need any bank and he openly praises the Carabinieri for "Precious work on health care residences": "In such a difficult moment it is important to know that you can always count on the extraordinary skills and professionalism of the NAS"3.

This is understandable: Conte in two years has shown a certain talent in playing politics according to Italian rules. It is less the fact that, as premier, he is silent about the strategies to secure guests and staff of these structures. Even less so is the fact that it does not give indications on how to manage relationships with older relatives. Nor does he and their families ask for prudence: Conte is silent.

Yet another Prime Ministerial Decree does not go beyond confirming the very right restrictions of access by relatives and visitors to structures, without references to the behavior required of staff or other prudential measures, while regarding the methods of interaction between elderly and family members, the only request, as said at the beginning, it was to not make a "gathering" around the grandparents, like anyone else. A little bit, it seems to us ... Isn't it that you want to avoid stressing public opinion, as always at the expense of the weakest?

There was no lack of solicitations to the premier (and governors) on these issues. In the week before Easter, "Faced with the worsening of the health situation in the RSA and, more generally, in institutions for the elderly" the voice of the Community of Sant'Egidio had risen loudly, launching "An urgent appeal to the Prime Minister Giuseppe Conte, to the Minister of Health, Roberto Speranza, and to the Presidents of the Regions, to guarantee the rights to care for the people hosted in these structures". It was not a generic and populist call: the meritorious charitable organization (and not only), accused directly, without words, how many "After failing, in many cases, to take precautions to protect both staff and residents" they passed “In general silence, a model that foresees the transformation of some institutes or sections of them into departments for Covid-19 patients. Older people are not second-class citizens: they are entitled, like everyone else, to be assisted in the best way and obtain hospitalization in intensive care if necessary ".

While someone was playing god on the skin of the weakest4, was passed through unjustified appeals “The unacceptable idea of ​​a division by categories of patients of this health emergency. And you cannot accept, resigned - or worse - indifferent, a silent massacre that could and should have been avoided ". It would have been enough to pick up the phone and have some patients transferred to other regions or Germany by helicopter. Or even simply at home: home care would have offered more dignified living conditions and extended life expectancy. However, as pointed out by the governor of the Marche "At the beginning of the emergency there was no mention of home care, they were not authorized: antiviral therapy was given only in the hospital, but when the patient arrived, it was already late". Yes, because for many patients and in particular for the elderly "The watershed is the AIFA resolution that allowed to start treatment already at home: pity it didn't arrive two weeks earlier, we would have avoided many victims".

There were other appeals, such as that of the national transplanted and dialysed association5, according to which “Coronavirus has entered the dialysis centers forcefully, causing numerous victims and terrorizing people forced to go to the hospital three times a week to undergo this therapy. The data are clear: out of 570 patients infected by Covid in mid-March, 147 died. A much higher percentage than the national average ... it is essential to immediately adopt extraordinary emergency plans in all Regions, to guarantee patient safety both during transport and during hospital treatment ". Appeals have largely fallen on deaf ears ...

We were unable to find our premier's answer to the Community of Sant'Egidio. Instead, we found that of German Chancellor Angela Merkel to another letter from the same organization: “Germany and Europe are strongly on the side of Italy. Various German hospitals have welcomed Italian patients, the federal government has sent medical aid. At the same time, we know that in view of the economic consequences of the pandemic, more will have to be done, and here too we are ready to act in the spirit of European solidarity "6.

Perhaps, our prime minister, instead of messing around for political calculation, would do well to take more care of the elderly and the weak, if, as Corriere della Sera claims, Mrs. Concetta, a 78 year old from Turin, who "It is not (not even) true that the state pays the funeral" and her husband's ashes await "For a month ... in the warehouse. He died on March 23, he was cremated " but now they are asking for 400 euros to return them. And to think that he had not become infected neither in the stadium nor while he was having a skiing holiday, but why "He went to the hospital to do dialysis ... that's where he got (this) virus; last time he entered and after eight days he was gone ”. How can you blame her if she says they killed him? How tens of thousands of RSA guests and staff were killed.

If the premier, "people's advocate", is silent, we of Online Defense we will not be silent.

Let me paraphrase Rhett Butler and state that, unlike other analysts, I believe that of ...
10351
Read

102 days of war brought to light many aspects of our country that were easily imaginable or we had ...
5239
Read