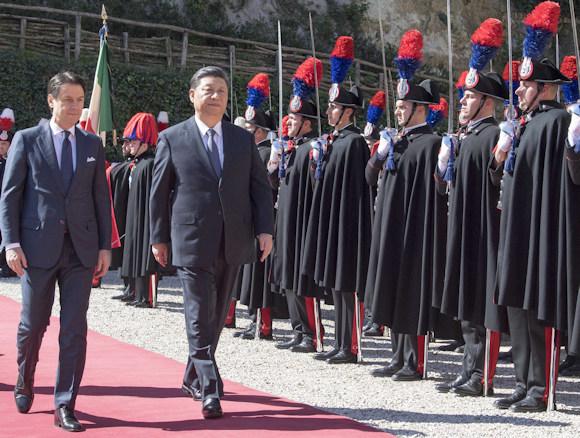 As Giulio Andreotti said? Thinking wrong is a sin, but is often guessed. In hindsight, certain government measures leave us very perplexed, above all because the beneficiary does not seem to be an Italian supply chain, but the People's Republic of China, which has been the privileged partner of the "yellow" 5-star administrations for two years. Maybe it is by chance, it is not for us to judge. But we can, however, take a look and make two considerations ...

Car help? Few and only if they benefit from Beijing

In Italy, the automotive sector (houses, suppliers, etc.) includes 5.700 industrial companies with a total turnover of 93 billion euros, equal to 5,6% of GDP, and 250.000 employees, equal to 7% of the entire workforce. of the Italian manufacturing industry. Do not imagine that we are only talking about FCA and Ferrari: the 5.700 companies are for the most part small or medium-sized specialized in components and Engineering & Design. Think that 45% of companies employ fewer than nine workers. If we add dealers, assistance and various services, the car weighs 10% of GDP and employs 1,2 million people in Italy.

Well, the perfect storm has fallen on them: "after a first two months of 2020 with volumes already decreasing compared to 2019, the coronavirus emergency and the consequent lockdown practically eliminated the market for cars, commercial and industrial vehicles in the months of March and April"; the first decade of May saw a drop in orders, as stated in an extraordinary joint press release by the ACI, the supply chain and the unions.

Just tears? No, really, "The great European countries - conclude - they are taking extraordinary measures to support the automotive sector. The hope is that Italy will be an example in Europe and, taking into consideration that the automotive sector is the sector with the highest employment and added value multiplier, immediately foresee, in this moment of crisis, an imposing incentive policy that allows the sector to relaunch production and the market, so as to once again be a driving force for the recovery of the entire national economic system ".

To such a dramatic appeal, the Conte government responded with the eco-bonus to electric cars and also to the "most virtuous endothermic cars" in terms of reducing emissions. Did you know that the battery is worth a third of the price of electric cars and that the People's Republic is the world's leading manufacturer of this type of device?

Among other things, the 300 million allocated (mostly directed to Asia ...) are a little bit, if you consider that the incentives - 60 million - had already been offered in 2019 and had remained largely unused by consumers. The amount of the incentive, however, appears even ridiculous: they are peanuts for a sector worth almost 180 billion. To understand each other, given the average price of a compact car at 20.000 euros and optimistically estimating the loss of half a million pieces sold, 10 billion in turnover are missing, to cover which Rome offers 300 million ... The government should understand that the sheet it doesn't even cover the feet, let alone the rest of the body.

The choice of the eco-bonus for electric and electrified cars seems even more insane compared to the 120 million incentives granted, in the form of even retroactive bonuses, for the purchase of pedal-assisted bikes, electric scooters, hoverboards, segways, monowheels and services sharing these means. We are talking about sectors where European production is unable to cover even half of the demand (which has grown more than five times in the last ten years) and where the Made in China play the lion's share. Yes, because almost 200 million electric bicycles and scooters circulate on the roads of the People's Republic today, but the internal market of Communist China manages to absorb just over half of the production, actively supported by Beijing. The rest is exported, often at unsustainable prices for European competitors.

They would have us believe that this is not a 120 million tip generously given to the People's Republic, however it seems strange that the obtainable benefit - equal to 60% of the purchase price - covers a maximum amount of 500 euros, with the maximum advantage therefore, if you buy the Made in China.

To the objection that there are also important Italian producers, which we will not mention here to avoid unnecessary controversy, it can be answered that none of them has activated production plants in Italy: in the Bel Paese they only take care of design and engineering, while production takes place ... who knows where is it? Yes, in China.

Motorcycles and scooters without bonuses: they are Italian (or at least not Chinese)

It will be a coincidence that motorbikes and scooters, despite guaranteeing social distancing, greater environmental sustainability, greater travel speed and ease of parking, predisposition to intermodality and less impact on urban traffic have not received government incentives. After all, the market in our country does not require Chinese products, but Italian or at most European, Korean and Japanese products. Therefore, no one felt compelled to help them.

The Chinese assault on our businesses (for four bucks)

We think of it as the president of the popular European Weber, according to whom "There is a risk that China will be the great winner of the crisis". In fact, despite government assurances about Golden Power "In the fields of defense and national security and energy, transport and communications", it is clear that medium-sized enterprises in the high value-added mechanical supply chain (as well as the five-star Food and Hospitality sector) risk most of all to pass, for four bucks and perhaps largely cash, in the hands of speculators of communist China.

What to do? In the meantime, it would be useful to follow the example of Germany where the government has decided to tighten the rules to protect national companies from unwanted acquisitions by investors from countries outside the European Union and the ministry of the economy also plans to request companies to specialize in artificial intelligence, robotics, semiconductors, biotechnology and quantum technology to make public the entry of investors who control over 10% of the capital.

Who knows if the Italian government will veto when the proposal of the leader of the EPP arrives before the Commission:impose a temporary ban at European level on Chinese acquisitions of companies that are currently undervalued or have commercial problems due to the coronavirus crisis"? We really fear yes ...