Home Recommended Publishing Libya: the crisis (and the boiata) of the seventh ...

Libya: the crisis (and the boiata) of the seventh year ...

Everyone is fine: after the escape of most of the staff of the Tripoli embassy, ​​the news that bounces in the national newspapers, based mainly on press releases and tweets from the foreign ministry and the embassy, ​​are keen to emphasize that in the chaos of recent days no Italian got hurt.

The president (puppet) of the national unity government, Fayez Al Sarraj, the one recognized by everyone except the Libyans, has declared a state of emergency. The decision was taken "to protect citizens, facilities and vital institutions that require all the necessary measures".

The war is recounted as if it were played on the superenalotto, underlining, for example, that on Saturday a missile "hit a hotel very close to the Italian embassy in Tripoli (its true objective)".

And now another version ...

For years the corruption of people born sometimes from nothing (but always from violence) after the deposition of Gaddafi has reached unprecedented levels. It does not matter to know who lives in Italy and Libya is interested only when it comes to "immigration". It imports to millions of Libyans in which most of those illegal immigrants went to work seasonally and then return to their country of origin. It imports families who find themselves paying 10 times the price of basic necessities due to the collapse of the economy and anarchy in which Libya has been reduced for seven years.

Let us clarify one point: Italians are not - save clumsy moves of the last hours - the objective of those who are now called "rebels". 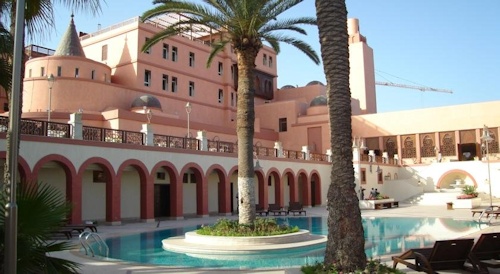 While the events are interpreted with the usual approximation (to justify the escape of some), it is not said that the fourth floor of the affected hotel, Al Waddan (photo), is permanently occupied (or at least it was until a bang. ..) by Tajuri pro militiamen one of the leaders of the Tripoli factions that have been harassing the city for years. Missiles, such as mortar or rifle shots, in war areas (and where supplies are scarce ...) are not fired at random!

Actresses of the armed uprising are Tarhuna militia, called "caniat", and they are gheddafiane. The target? They want to capture the corrupt militia leaders of Tripoli: Ghernewa, Tajuri, El Bisher, Kara and Bukbak (Tajuri's right-hand man) who have reduced the city to starvation and stole money for years.

Today we pay choices, logics and compromises of politicians who preceded the current government. It will not be necessary to review even more tactics, strategies and above all "friendships"? And who has "advised" in the past ... is still in place to do damage?

Let me paraphrase Rhett Butler and state that, unlike other analysts, I believe that of ...
10202
Read

Online Defense readers often ask me if it would be no less painful for Ukraine to give up and accept a ...
5337
Read

102 days of war brought to light many aspects of our country that were easily imaginable or we had ...
5204
Read

Dear reader, For nine years Difesa Online has been fighting with its strength together with the help of some readers and sponsors. The...
6245
Read

Last week there was a controversy over the downsizing (decided by the previous government) of the military ...
3739
Read

These days Ukrainian fighters are receiving arms supplies from NATO and other countries of the ...
10877
Read