Libya: al-Sarraj talks about peace with Conte (while defeating Haftar on the field) 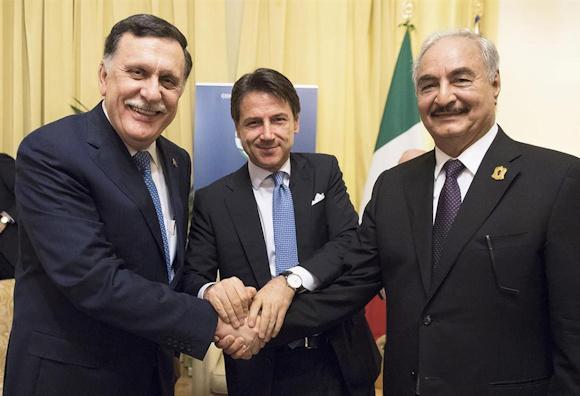 The expulsion from the Tripolitania of the LNA (Libyan National Army) by the militias of the GNA (Government of National Unity) is proceeding slowly but inexorably.

Last week, Prime Minister Conte had had a telephone conversation with the recognized premier al-Sarraj: in the interview, Conte had reiterated the usual litany on the political solution as the only way forward. Evidently, once military support from the Turks was obtained, al-Sarraj preferred the military route. In fact, the final reconquest of the Tripoli international airport, which took place between Wednesday and Thursday, has dealt a severe blow to the forces of General Haftar.

The reconquest of the airport is part of the broader plan of the offensive taken on 5 May which took the nationalist forces by surprise, unable to defend the town of Sabratha, a location of strategic importance. Haftar troops responded by bombing Mitiga airport with artillery, from where Turkish drones take off and where planes (from Turkey) loaded with armaments for pro-Turkish militias land.

From the international point of view, it must be noted that our government's position is increasingly in favor of al-Sarraj, given that whenever the forces of Tripoli launch an offensive, the Farnesina is silent, while when Haftar's men attack criticism arises immediately.

An attitude that brings us closer to Ankara, intent on exploiting the Libyan situation to propose itself as a hegemonic power in the Mediterranean.

Without forgetting (as our politicians seem to have done) the contingent of Italian soldiers in Misurata, in the presence of the hospital, who are very close to the military objectives of the GNA (an ammunition depot of al-Sarraj militiamen exploded in the immediate vicinity hospital).

The problem is that this government (but I would also say the last four) is unable to have a foreign policy, as it would entail for a country like Italy given its geographical location as well as the economic (and historical) interests present in Libya. By now we have reduced ourselves to serving the Turks, at most we are keeping to the limit of the Libyan territorial waters, to monitor the activities of the Ankara Navy units that instead sail undisturbed in the Gulf of Sirte.

On the other hand, the causes of this political marginalization are all due to our foreign policy, too biased towards cooperation with international organizations (UN, EU), not wanting (knowing) to understand that the field of international relations is a state of nature. , where the law of the strongest is in force (all against all). It is now clear that there is no European Union strategic interest in Libya.

Turkey, on the other hand, has perfectly understood this, since the beginning of the XNUMXst century, it has detached itself from American politics in the Mediterranean, pursuing its own hegemonic policy and therefore proposing itself as a stabilizing asset of the entire area.

While Rome continued to blateral di diplomatic resolutions of the conflict, Ankara has deployed men and means to allow the recognized premier al-Sarraj to repel Haftar's (actually clumsy) offensive, and to take a leading role in Libya, leading role that we should have hadif we had been able to develop a foreign policy.