Home Recommended Publishing The army that is not there

The army that is not there 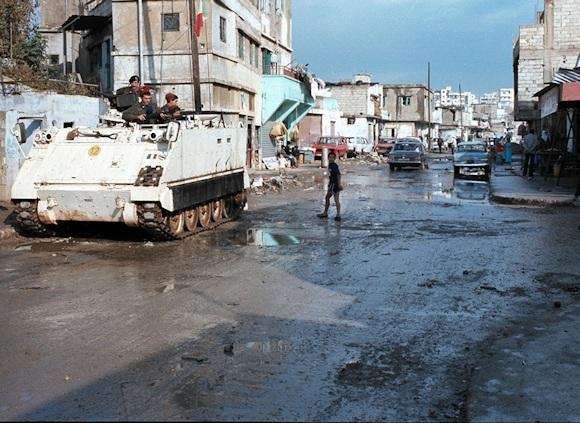 In the eighties the Italian army was called by the international community to lead the first mission outside the national borders after the Second World War. A large part of the contingent sent to Lebanon, commanded by the general incursor Franco Angioni, was made up of conscripts excluding the raiders of the 9 "Col Moschin" and the Carabinieri of the "Tuscania" battalion. Sending abroad, in the war zone, of the conscripts was a gamble for the government of that time, which, afraid of offending the Italian families, dyed the ITALCON contingent of white to ensure the Lebanese, but above all the Italian mothers, who it was essentially a peace mission.

The propaganda machine moved so that in Italy, but also abroad, the Italian presence in Lebanon was experienced as an only humanitarian task where the soldiers, armed by convention, brought assistance, food and help to the people battered by the war. Everyone was therefore convinced of this, but there was a particular because on the streets of Beirut someone did not agree with this rainbow vision of the war, taking the trouble - often at night - to shoot on civilians and the military assigned to their protection!. General Angioni knew it, even the infantrymen and Bersaglieri knew it, but those who lived directly the enemy fire were the Nono's raiders, who, without too many frills, went on patrol armed and ready to fire to repel the fedayyn and rescue refugees and compatriots.

Lebanon highlighted a double aspect of Italian soldiers: the first concerning their individual abilities, especially with respect to the courageous efforts lavished by the conscripts, secondly he made it clear that in case of necessity the immaculate "peacekeepers" would not have made compliments using their FAL BM59 without hesitation. Everything that was happening in Lebanon was opportunely filtered home thanks to the newspapers and televisions that insisted on sending pictures of boys who hugged old or who nourished the destitute gathered in refugee camps. All true, of course, but how can we ignore the fact that those very fields of despair were the main target of human ferocity?

Who defended those people? The answer was only one: the Italian soldiers, but this "unfortunate" fact had to be muted, softened, if not totally hidden, because to smooth the machine guns was not in the Italian DNA and the war was ashamed. Lebanon was just the beginning of an irreversible process of deconstruction of the Italian soldier who was enveloped and suffocated by the false myth of Italy. Politics had to reiterate to the world that the Italians repudiated the use of weapons, although centuries of history demonstrated the opposite. On this dogma, dozens of governments built and still build their inept foreign policy, creating enormous damage to those who, by trade, chose to serve the country in uniform.

Yes, today Difesa Online reveals to the public the great secret that many seem to ignore or rather, they pretend not to know: the soldiers make war by killing the enemy. Lebanon, Somalia, Afghanistan, Iraq all places where our men in uniform went to fight, to hinder terrorism and to help local populations to raise their fate. They did it essentially with weapons, using them and teaching them to use them, without missing a kind of basic support such as medicine, food and infrastructure construction. Essentially, however, the soldiers did what they were trained for: the war! If a country denies this with a mendacious and tamed propaganda it is as if it were forging a sneaky bullet and shooting at the backs of its men, because that is what happens if you send children to death and then deny the world the purpose of their mission.

By now the time would be ripe to admit that the wearer of the uniform is not a mere replacement of the civil protection or the neighborhood policeman. It is important to restore dignity to a sector that enjoys high regard among all the allies of the Atlantic Pact, but finds it hard to be recognized at home. Of course, military Italy does not enjoy always glorious passages, but it is essential to know that the first shame comes from the Italians who deprive their soldiers of support, still labeling them with worn-out and worn-out political colors, disregarding their value or pointing them out as the heirs of a distant past and fallen into oblivion.

We can not expect much from a people who have forever buried their critical sense by delivering it to a subculture that no longer knows how to recognize the fundamental values ​​of common living and its origins.