Home Recommended Publishing The Italian Air Force is far beyond the ...

The Air Force is well beyond the 4.0 era

"A concrete demonstration of what can be done in complex operations through a complete integration of the capabilities of air power as an enabling factor for all the Armed Forces sisters and other institutions of the State that deal with security and defense. After the innovation processes already initiated by the Armed Forces in favor of the staff, in the field of logistics and advanced training, the fourth pillar that supports the era of '4.0 Aeronautics', that of the cyber systems, of the collection capacity closes , processing and distribution of information to assert, in all operating environments, decision-making superiority". With these words the Chief of the Air Force, General Vecciarelli, represented the international exercise, conducted a few weeks ago between Italy and Germany and in cooperation with the Warrior Preparation Center of the US Air Force Command in Europe, Spartan Alliance 18-8.

What are we talking about? Of the future, of a dimension that is normally only glimpsed at the cinema, the modern one, no longer in films like Top Gun in which we trained with real aircrafts and the enemy was represented by a MiG- "28" (which was actually a very western F-5).

Imagine taking off on scramble from your base and coming to intercept a MiG29. You know that this is a simulation, but the aircraft you have in front of your eyes (if in a concurrent) or on the instruments, if in flight, is really that plane with all its performances. Do you want to see the MiG in flight? An aircraft can be transformed from the central server, the one that manages the entire training operation and transmits real-time data to ground simulators (potentially in the entire globe) or to airplanes in flight, in the radar track of a real MiG. 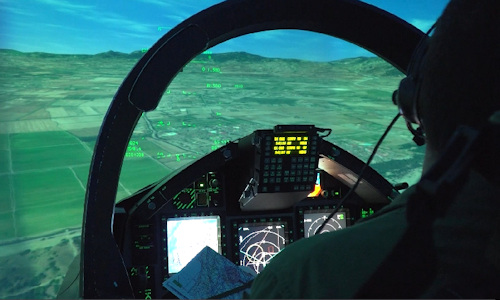 Italy is today at the forefront of the sector: on 22 simulators used in the Spartan Alliance well 12 were made by Leonardo and in all there is in any case a relevant national component.

A novelty? Negative: it is the scale, but the technology is available to the flying school of the Air Force of Galatina for at least three years (curiously we had talked about 4.0 ..., v. article).

Still 4.0 Aeronautics after 2 years? Only for what we have just said, we are at an 4.1 Air Force.

Italy that is worth

Leonardo has implemented the distributed simulation capacity at the various linked sites, thanks to the use of its own synthetic environment generator called RIACE (Realistic Intelligent Agent Computer Environment), which allows to integrate the simulation of several systems at different levels of complexity; MBDA Italia, on the other hand, contributed to the development and implementation of simulation and training software for air defense missile systems.

Having internationalized capacities and technologies - and maybe not free of charge - once again makes an armed force capable of driving national industries (or national participation) in foreign markets, real and serious ones (by value). It had happened with the Navy previously in several activities (or attempts) and it happens today with the AM that deserves then a further upgrade and 4.2. 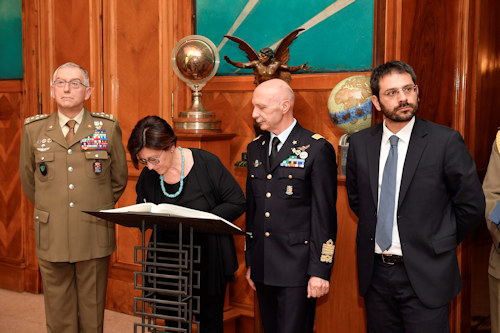 AM returns to talk!

But that's not all. The exercise inaugurated an attitude of openness to communication that we had forgotten. Seeing a general shake hands with all the journalists present, hoping for a period of transparency and collaboration for the future - after two years in office - gives hope for those who, like us fed up with lies or censorship, want to show or understand diamonds and national glass.

Of the removal of the prohibitions we must, without any doubt, thank the new Minister of Defense, Elisabetta Trenta. Whether it is an enlightened choice or the wise awareness of the consequences of the previous executive ... we do not know for sure.

The truth always emerges, sooner or later. If the light is also positive (see the latest revelations on the F-35 ...), why hide it?

With this new policy of the Italian Air Force we reach at least one 4.3.

We hope that, with the ongoing revaluation by the specialized press (the serious one) of the only fifth-generation aircraft in service in the world, F35 can soon be called "Aeronautica 5.0".