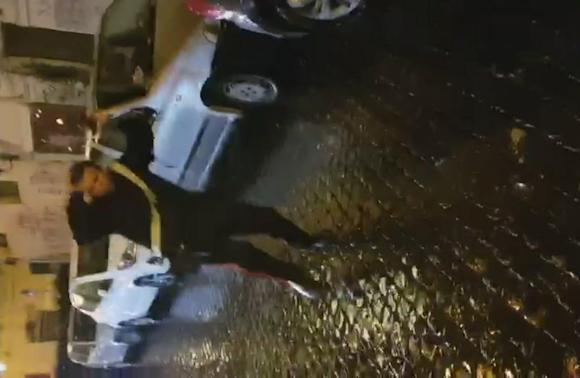 In these hours, on the web and on the internet pages of different heads, the dramatic sequences of a carabiniere in service who, threatened by a horde of hooded cowards, steps back towards the assailants. The carabineer, gifted with great cold blood, who is intimate with violent idiots disguised as supporters, stands back; at some point he even seems to have the worst while being reached by a blunt object that hits him in the head. He stumbles again when he throws him a garbage can, trying to escape desperately through the city traffic covered by the insults of the attackers, proud of their brave gesture. They are images that are disgusting for several reasons, first of all the disgust provoked by a sport that we all love, whose context is however stained by elements belonging to the so-called "organized supporters", contaminated by hordes of cowards who take advantage of an event to give vent to their daily frustrations.

If read in "public order management", the attitude of the carabiniere could have resulted in a second case to the "Carlo Giuliani" when, in a similar situation, the threatened agent reacted with a gunshot that caused the death of the young Genoese. And if the Rome policeman had pulled the trigger?

Fortunately, the carabiniere challenged by stupid cowards, has been able to react in a composed manner, keeping the attention on the assailants, ready to use the weapon of ordinance as last resort if things got really bad. If only the poor carabiniere had lost his balance ending up on the pavement, the tone of this article would be different because probably the other guardian would cry the order victim of criminals without courage and strong just because in herd.

The Minister of defense Trenta, on his Facebook page, thanked the young of Benemerita both for his cold blood, and because thanks to his ability to maintain control, he has avoided the usual consequences typical of a country without a backbone.

Football matches, crazy fans colluding with the companies: would it not be time to clean up an environment that certainly does not have the same complexity of terrorism? It would not be time for football clubs (the only foraging of ultra groups) to be reduced not only to apologize, but to repay thousands of euros every time a policeman or a passing victim is touched? For how much we must still assist to besieged city of masses of drunks and stupid violets that hide their violence behind the colors of the team of the heart? Why in countries like the United Kingdom - the founding homeland of hooligans - have they managed to contain the problem very well, while here we continue to do nothing? All the various leaders of the fans are known to justice, why not rot in jail?

In addition to all this we must think that instead of the carabiniere could also be an unsuspecting passerby or a fan with his son, perhaps with some symbol of the opposing team. What would have happened?

Law enforcement officers in a stadium are a tiny spot compared to the mass of supporters, their number is often inadequate and can not cope with urban warfare such as those just happened. Attempting to reject a charge of people whose intention is to hurt you is not a pleasant thing and the answer can not be weak or pondered. It is important to understand - and it is good to underline - that the containment operations carried out by baton from the police or carabinieri serve to annihilate the group of idiots, but also and above all to protect those who go to the stadium to enjoy a sporting show. We find it unacceptable that within a stadium we must deploy a number of guardians of the order to make it look like a football match the outbreak of a possible armed popular uprising.

This time it went well, but what happened can not and should not be repeated. The apologies of the hostess team president do not serve long, at least until the president himself identifies within the supporters who the infamous authors of such a gesture are. Sometimes one wonders what the relationship between fans and society is about: whether it is love for sport or a gloomy feeling of terror.

Let me paraphrase Rhett Butler and state that, unlike other analysts, I believe that of ...
10212
Read

Online Defense readers often ask me if it would be no less painful for Ukraine to give up and accept a ...
5340
Read

102 days of war brought to light many aspects of our country that were easily imaginable or we had ...
5206
Read

Dear reader, For nine years Difesa Online has been fighting with its strength together with the help of some readers and sponsors. The...
6255
Read

Last week there was a controversy over the downsizing (decided by the previous government) of the military ...
3743
Read

These days Ukrainian fighters are receiving arms supplies from NATO and other countries of the ...
10878
Read