Home Recommended Publishing Minister of Defense Thirty comes back from ...

The Minister of Defense Thirty returns from Libya: not all is lost 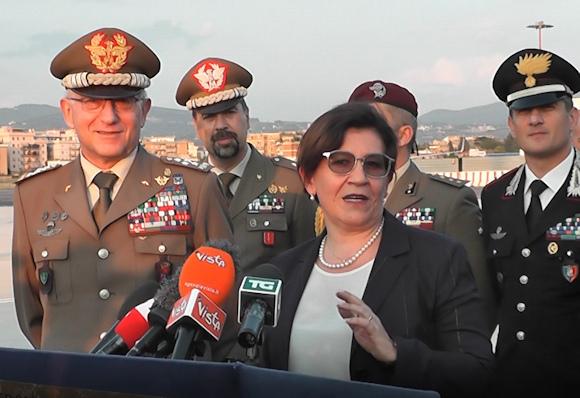 For years we have written that in Libya there were actors who could not be excluded. We have been snubbed and the country has never come out of anarchy and economic disaster, the "allies" have competed to cheat and are now 10 moves ahead of us. Why listen to someone who said something different from the chorus of analysts and experts paid and "positioned" by the parties? For the results.

For years, Italy has focused on a Sarraj that we could compare (I say it with extreme magnanimity) to our president of the Conte council, but excluding the local "Salvini" and "Di Maio". The result? The total bankruptcy: resources and contracts to others while we remained and remains the migrant emergency. Regarding the question of "immigration" allow a parenthesis: the devastation of the Libyan economy has deprived tens and tens of thousands of African seasonal workers of a rich seasonal business destination. It is therefore in the countries of origin that we can intervene, but also in Libya itself, that the thousands of desperate people forced to continue today should find interest. Many, not all, do not extremeize. In any case, avalanches are defused upstream, not downstream ...

For a long time, therefore, Italy has recognized only the internationally recognized president, Sarraj, forgetting that - like ours - it is not worth a penny without the support of the other actors, the ones that matter.

With the return of Defense Minister Thirty last night, a change of epochal route seems to have been undertaken: theINCLUSION of all the parties in the process of national pacification is the new way to follow.

Elections will be held in Libya at the end of the year, which have been postponed since last spring. I firmly believe that before voting the Libyans waited to understand what death to die between a confirmation of the old regime in Italy or the victory of the character who shamefully betrayed them in 2011.

A glimmer of hope seems to come back to life not only in Italy with the much-criticized new yellow-green government. Hope does not derive from partisan cheering, "political" some readers would say, it derives from facts, from choices that are finally put in place at home and abroad. Of course, the path is long, treacherous and as usual in Italy you have to watch your back, you can never aim - as in other nations - with confidence on the horizon. Humility and intelligence are needed, however a first small step is taken: a U-turn.