The tragicomic duo Di Maio-Trenta: sometimes the blows are good for body, mind and spirit? 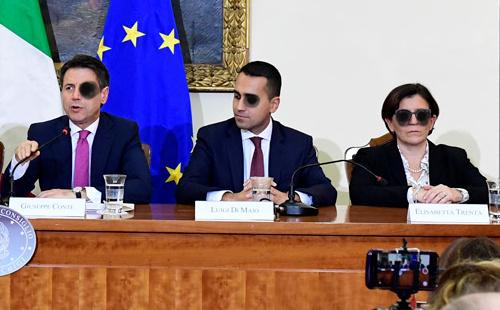 È of a few hours ago the news of an 180 inversion on the defense policy of the vice premier Di Maio and his emanation, in Via XX Settembre, the Minister Trenta.

After the pentastellars have narrated their "Defense Model" for months (in a talk show television the political leader of the movement boasted, only a few months ago, of having cut 500 million euros to the allocations destined to the Defense), focused on the inclusion, on the "dual" use of the Armed Forces, on the renunciation of the acquisition of purely offensive weapons systems - at least the singular perplexities expressed by the deputy prime minister pentastellati on the F-35, not to mention the hijacking of funds for the development of a new attack drone, the P.2HH of Piaggio, in favor of the P.1HH of the same House -, while looking for civilize assets in the acquisition phase (such as the new amphibious assault ship LHD Trieste).

It is also impossible not to highlight the total bankruptcy policy conducted by the Executive in the Libyan question, a theater of fundamental importance for our strategic and economic interests.

Luckily - but it would be better to say thanks to the recent European elections - here is the much hoped for (from us!) waltz tour on the appropriations for the Defense.

The Ministry of Economic Development, together with the Ministry of Defense, has ratified a commitment of over 7 billion on long-term Defense programs.

Minister Trenta said to himself satisfied with the commitment made by the Government and certain that this maneuver will allow both the efficiency of the Armed Forces and the safeguarding of the economic interests of the companies.

Among the unlocked programs there are also two investment items for the Iveco Consortium - Oto Melara (CIO) which affect the VBM Freccia Evo 8x8 and the new heavy bus Centauro II.

These additional investments will allow the Armed Forces to carry out modernization and acquisition programs that would otherwise have been set aside (or rather sacrificed in the presence of 100 quota and citizenship income).

Among the programs funded there is the update of the training, hunting and fighter-bomber component (M-345, Typhoon and ECR Tornado); the rotary wing component of the Army (UH-90, the new attack helicopter that will replace the Mongoose and we hope the CH-47F for special forces); the FREMM, the class patrol boats Thaon of Revel and the latest generation U-212A submarines.

However, the question remains regarding the capacity of this Executive to spend far-sightedly on efficient weapon systems, which certainly constitute the backbone of a foreign policy, aimed at protecting not only national interests, but a whole know how technological indispensable for our position in the restricted club of the industrial powers.

Photo: (elaboration) presidency of the rabbit of the ministers