Coronavirus can destroy the American superpower. What Trump doesn't say and the nonsense he does 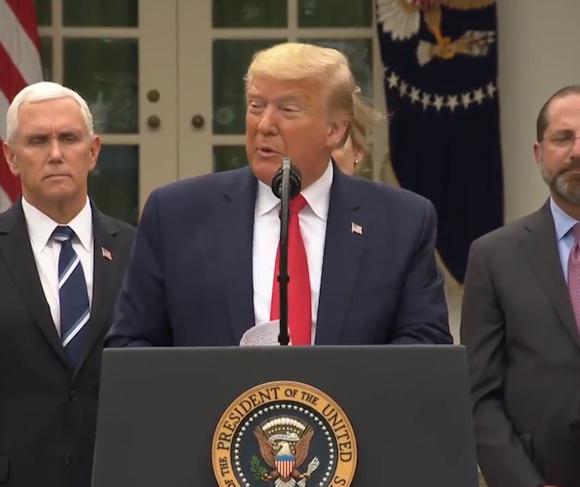 The coronavirus is about to succeed where the central empires, Nazi Germany, the Japanese Empire, the Soviet Union and Islamic terrorism have failed, inflicting a blow on the United States from which they will take a generation to rise, also due to strategic errors of their leaders. Just as Hoover followed the 1929 crisis with devastating deflationary and recessive policies whose damage was only overcome at the end of the Second World Warso today the Trump administration's unfortunate choices could cost the US much more than they expected ...

Two days ago President Trump boasted that he was head of a "Better team than anywhere else in the world" and that since the beginning of the epidemic, establishing “Extensive restrictions on travel to China and implementing the first federal mandate quarantine in over 50 years. We have declared a public health emergency and issued the highest level of travel alerts in other countries ... " For this, according to him, the United States has "A dramatically lower number of virus cases than those currently present in Europe". He continued, as usual, to brag that, on the contrary, "The European Union has not taken the same precautions and has not limited travel from China". The president said he was certain that outbreaks exist in the United States "Were sown by travelers from Europe".

Given this and "After consulting the best public health professionals", He has decided "To take several strong but necessary actions to protect the health and well-being of all Americans ... to prevent new cases from landing" In the USA. For this purpose it has decided to suspend "All trips from Europe to the United States for the next 30 days", excluding the United Kingdom.

The risk for Americans is "Low, very low" even because "Due to the economic policies we have implemented over the past three years, we have by far the largest economy in the world ... and vast economic prosperity" that offers to the United States "Flexibility, reserves and resources to manage any threat that presents itself".

Finally, he kept pointing out that "This is not a financial crisis, it is only a temporary moment that we will overcome together as a nation and as a world".

This said before the British privileged ally reported that they had realistic estimates of 10.000 cases of COVID-19 infected already present in the UK (and with full access to the States) and that the Dow Jones index lost almost 10% in one historical session, Thursday 12 March. Above all, Trump has been denied by the large stars and stripes insurance companies, which have clarified once and for all that they are willing to grant free tests, but not even treatments, as announced by the Oval Office..

For European allies, who have been fighting with and for Washington for years, deploying forces, making strategic choices and investing resources, it is more than a stab in the back: it is a free and unprecedented humiliation, a kind of new Dunkirk, shameful and without glory.

While Moscow is discreetly silent on the real spread of COVID-19 in its territory (especially after the return of tens of thousands of vacationers, expats and seasonal workers from Italy, Switzerland, France, Spain and Germany) and Beijing tries to do the make-up to their responsibilities and omissions by sending hot panels to Italy, the American president does not reach out, but chases away the European ally like an infected dog, evidently good only when Washington wants to play at the great powers and containment in the Baltic Sea, but otherwise guilty of having "infected America ".

Trump is not a man of honor. We had no doubts about this. But we thought he was a person with good tactical intelligence.

We had been wrong. Friday 13 March he spent most of the press event in which he announced the national emergency to justify himself from the accusations of laxity and inaction in the face of the advance of the contagion. Today the Disease Control Center also had to explain to him that "From a minimum of 2,4 to a maximum of 21 million people in the United States could request hospitalization, causing the collapse of the nation's health system, which has only about 925.000 hospital beds with medical personnel, of which less than a tenth are for critical cases in intensive care ". In conclusion, they will not even be able to endure the most favorable pandemic scenario in the United States.

The situation in the US is so serious that Mexico is considering - it's not a joke - the hypothesis of closing the borders to the Americans.

Perhaps the reader is unaware that the US, against a GDP of 21.800 trillion dollars, has a public debt of almost 23.800 trillion, 128 thousand billion of uncovered spending commitments and a national debt (public + private) of 76.000 billion. How the thousands of people, perhaps tens of thousands of billions, will pay for public health and the safety of the country system, only the Good God knows.

Poor President Trump, who foolishly humiliates us Europeans and for months downplayed, indeed mocked those who asked serious measures, not simple and useless closings of ports and airports to travelers from China, when the coronavirus, at best, had already left the People's Republic in December and was hiding in a few individuals, ready to spread everywhere.

Quoting Shakespeare, we allow ourselves to ask those who have to tell the facetious president "that his conscience bears the bitter responsibility for the devastating" crisis that is affecting the health, economy and society of Americans and that "his hoax it will seem anything but witty if few will laugh and cry thousands. "

We are still in time to reduce the damage, but we need courageous and internationally coordinated measures, not the din of an old trombone.