Home Recommended Publishing The coronavirus attacked Italy (and no ...

The coronavirus attacked Italy (and beyond) already in October 2019. Online Defense confirms that Beijing lies 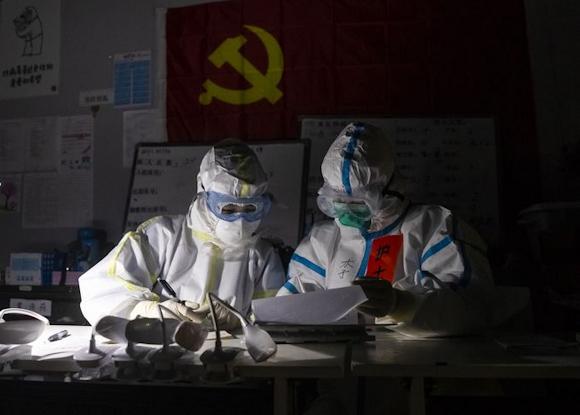 There is no "official version" on the first case of COVID-19 in the People's Republic of China, except for the one reported by South China Morning Post and dating back to November 17, 20191. This is because, as any lawyer who is just a little experienced can advise his client, those who fear having to face the consequences of their actions and omissions must first take precautions by not making statements that could compromise him.

November 17? According to the data in the hands of Difesa Online and on which I will base this short article, the coronavirus had already made the leap "outside of China" before November 17. It is not otherwise explained that a Piedmontese reader (Alessandria area) tells us that he has contracted pneumonia with pleurisy already in late November and that in a via crucis of hospitalizations between December and January he developed a clinical and radiological picture perfectly superimposable on COVID-19.

What about the French sportsman who participated in the Military Games held in Wuhan from 18 to 27 October and between late October and early November did he return to his homeland with the symptoms of a severe flu, which disturbed him until mid-November?

We even have another case, a Tuscan active in fashion, with a form of chronic asthma and with professional contacts with the Chinese community of Florence and Prato and frequent movements in Italy and abroad, who at the beginning of October developed a violent form of atypical pneumonia resistant to antibiotics as it is of viral origin, which has harassed it until the end of November. Said reader at a serological test has shown that he has developed G antibodies and is negative for the swab. And it is always in October 2019 the case of a wind instrument player from the Val Seriana hit by an aggressive form of pneumonia with a very slow course.

What do ALL these cases have in common? Three important elements: (1) the disease is very contagious and always affects patients' cohabiting family members but in a milder form(2) the disappearance of the sense of smell and taste simultaneously with the aggravation of symptoms, in the absence of a form of rhinitis and for a period of at least ten days(3) the slow recovery, sometimes with the aftermath of lung lesions still present today. In short, the COVID-19 has left its clearly legible signature.

Apart from these cases, we can refer to Italian doctors - and not only - who since October have detected an incredible number of pneumonia cases, especially in the North West and in Tuscany. In this regard, explains dr. Pasquale Mario Bacco, is demonstrable as between the North West and Tuscany “Already between September, October and November there were anomalous pneumonia, which were then connected to the legionella, but scientific evidence has never been found in this regard. These were exudative pneumonia such as coronavirus pneumonia, which mostly attacked elderly patients with previous diseases ".

Do you remember the Legionella epidemic (a bacterium, mind you ... not a virus) that massacred in Lombardy in autumn 2018? Well, he did not teach anything at national or regional level, so much so that on 3 and 4 February the minister Speranza and Prime Minister Conte said that the situation was under control, on 2 February the acclaimed virologist Burioni stated by Fazio that the virus was not circulating and therefore the risk of spreading was zero and even at the end of February the leaders of Lega and PD, Salvini and Zingaretti, claimed that "Milan does not stop".

We all stopped because nobody wanted to collect alarming data neither in the autumn when they were still sporadic but numerous nor at the beginning of winter when the waiting rooms of the family doctors were filled with patients with serious respiratory problems and with evident symptoms pneumonia. Indeed, we continue to listen to Communist China and we are among the few western countries that have not accepted the request for an independent investigation.

Continue to report the possible cases of COVID-19 in Italy in autumn 2019: they will be reported in a future article.

Let me paraphrase Rhett Butler and state that, unlike other analysts, I believe that of ...
10348
Read

Online Defense readers often ask me if it would be no less painful for Ukraine to give up and accept a ...
5405
Read

102 days of war brought to light many aspects of our country that were easily imaginable or we had ...
5237
Read

Last week there was a controversy over the downsizing (decided by the previous government) of the military ...
3756
Read