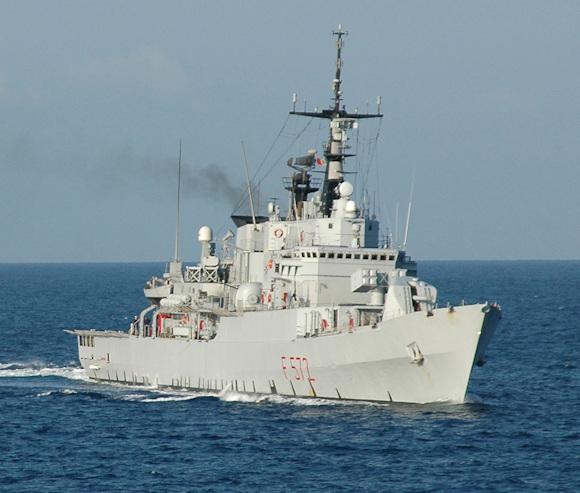 A few days ago the intervention of a unit of the Navy allowed a group of fishing boats, leaving Mazara del Vallo, to get away from a Libyan boat in international waters (v.comunicato).

Today three fishing boats 35 miles off the Libyan coast, between Misrata and Khoms, were shot by the Tripoli coast guard, trained and financed by Rome.

The commander of one of the fishing vessels, theAliseo, was slightly injured by glass shards generated by some bullets that hit the dashboard. The frigate intervened on the scene of the accident Libeccio (photo) which should have been decommissioned last year after almost 40 years of service (the sale of the two FREMMs to Egypt - the Bianchi and Schergat - delayed his retirement).

It is now clear that both the self-styled coast guard of Haftar (the former strongman of Cyrenaica) and that of Tripoli (controlled by the Turks) have the clear intention of removing the Sicilian fishing fleet from the Southern Mediterranean, arbitrarily extending the EEZ (Exclusive Economic Zone).

It is hoped that this threat will be readily acknowledged by the Italian government, and that it will employ the Navy, in compliance with international law, for the defense of our fishing sector. If an Italian fishing boat were attacked by any vessel (perhaps without a flag indicating membership of a state), in international waters, the Navy would have to intervene by any means necessary to ensure its safety.

The Parliamentary Commission, charged with shedding light on the case of Giulio Regeni, found lifeless in Cairo on 3 ...
282
Read

"I work only for myself" thus, between laughter and grunts, the protagonist of the animated film says at one point ...
1052
Read

The new commander of the MIASIT mission and the related support staff will reach Libya but have not been ...
6181
Read

Never, as this year, does the anniversary of September 11 take on a celebratory value, but also a mocking one. On that date the ...
1100
Read

For those who have lived the last few days with acquaintances queuing at Kabul airport, what happened yesterday will be a ...
2319
Read

Biden's mistakes and lies will pay the Afghans in blood

The images coming from Kabul are dramatic. Unfortunately we also know that in the provinces the situation is ...
5587
Read

After 20 years, Afghanistan has returned to the hands of the Taliban. Are we really surprised? When 9 years ago there are ...
4538
Read

The appointment of a general to "patch up" the inability to manage a complex situation has created and still ...
17447
Read