The yellow vests: legitimate protest movement, infiltrated by so many old acquaintances of the police of half the world 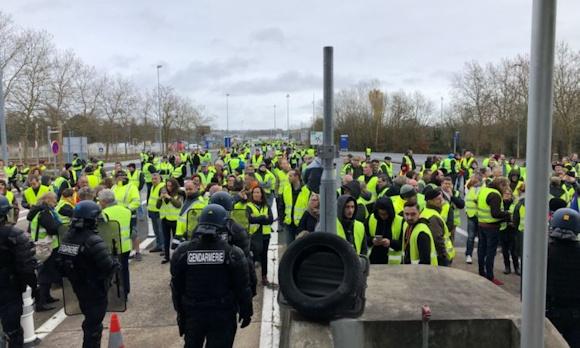 A popular uprising started by transporters and motorists, resulting in episodes of urban violence under the eyes of a helpless government ... No, dear readers, it is not the chronicle of a Saturday in Paris and in the big French cities in this "overheated" autumn, but it is the story of the only attempt at revolution "from below" and, fortunately, did not lead to terrorism in the history of Italy: we are talking about the protests of the "pitchforks" in December 2013.

With Russia struggling with the organization of the Winter Olympics in Sochi and distressed by the protests in Ukraine, the Americans disinterested in the facts of Italy, with the "machine of colored revolutions" at work in the former USSR, no one came in mind to imagine that the poor (in the sense of the means) pitchforks were eterodiretti. Indeed, they were not direct at all: for this reason, before the explosion of Renzismo, they lost the golden opportunity to take down from the square the "regime", which at the time had the nothing fierce face of Enrico Letta and the good manners of Angiolino Alfano at the Viminale.

Behind the yellow vests ... there is the same lack of direction: in the sense of political leadership, of economic-political objectives, of organization, etc. A good level of web coordination can not replace common ideas and aspirations: just think that the famous "list in 25 points, very radical, and graphically appealing1 - a yellow jacket with a list of claims - but it is certainly not the original version. One of the sites that first launched it, librepenseur.org, clearly warns that these are the "claims that the gilets jaunes should have if they really want to change things". To understand how, on the yellow vests, most of the time nonsense was circulated, to the sole advantage of those who made the speaker, just think that the Italian media had launched the "list of 25 points" as "manifesto of the movement ".

Perhaps, it really is, as The Times claims2, of a "social" maneuver in Moscow? Or perhaps, as they claim from the Kremlin, the Russians have nothing to do with the yellow vests and the attempts to attribute them are, themselves, hostile political-media actions?

The misinformation is so great and even the young vice premier Luigi Di Maio has fallen, according to whom the various "manifestos" of the French movement are ... in the Italian budget law. Which, for now, is even less clear than the intentions of these protesters transalpine ...

Not being able to interpret for what they really are, beyond presenting themselves with all the weaknesses of the "pitchforks", we have to dwell on the news. The episodes of violence observed in Paris (and in the rest of France as well as in Belgium) and that have characterized this phenomenon, eventually achieving greater attention even to extensive road blocks already seen with our "pitchforks", are actually foreign phenomena to the movement itself, for what it seems to understand. They are, rather, old acquaintances: explosions of anarchist rage, squad violence and "proletarian looting" already observed here in Italy, for example, on the occasion of the G7 / G8 of Genoa in July 2001, in Piazza del Popolo in December 2010 and in Milan , on the inaugural day of Expo, in May 2015. The frames often report to the policemen, unnecessarily on the tracks of those responsible, the same faces, perhaps aged, in all three events. The same faces of the "international vandalism and looting" that became the protagonist, for example, on the occasion of the G20 in London in April 2009 and in Toronto in June 2010. Auto dates on fire, windows broken down, looted shops and public works damaged: they are, let's say, the trademark of old and new knowledge of security equipment around the world, who now wear a yellow jacket just because the red flags do not go more fashionable.

In a sense, the yellow gilets have thrown the bait to which they have taken all those thousands of looters, that the media labeled as "black block" and that they are nothing more than anarchist-socialist ideologies and now too in love with their IPhone to start again with the anti-globalization fights.

It is worthwhile to read a part of the comment sent via Facebook by Alessandro Di Battista, leader grillino in voluntary (and well paid) exile3, before concluding: "The demands of the yellow vests are sacrosanct, just as their battle against this bloody globalization is sacrosanct". Blessed is he who has understood everything and wants to imitate how to understand us too. We, who are still modestly learning, allow us to say that for the moment the movement of yellow gilets is neither flesh nor fish. And it is never said it will ever be. And that the only thing "direct" for now are not the drivers "pissed off" (borrowing this expression from the great comedian Gioele Dix), but the misinformation that media and political figures are proponing to the public opinion.

3Not to step on the feet with Di Maio himself, not for anything else.