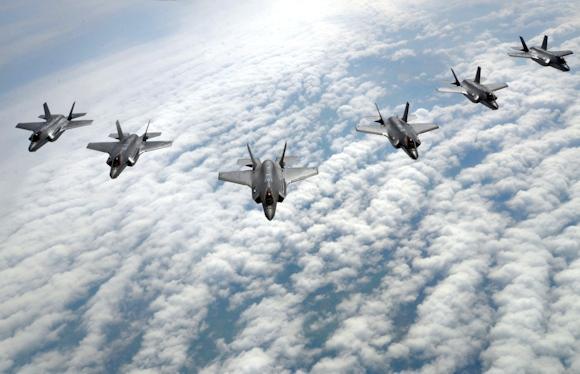 Let's recap: twenty years ago we have had politicians "sons of bona donna" (once in a positive sense ...) that, to make our country adhere to one of the most innovative and ambitious military programs in history, the JSF program, have asked and obtained from the USA conditions of absolute privilege: 131 "almost regalati" aircraft (v.intervista), European production in Italy and the prospect of decades of maintenance for all aircraft on the continent ...

What have we been able to do a few years ago to keep a temporary government alive, one of the many "non-elected" ones that have followed? Cut the F35s to reduce them below the threshold that contractually would have made us lose 30% of the production of wing boxes we had received! This is to gain consensus from unaware and easily manipulated voters with equations like 1F35 = 10 hospitals. But no one screamed at the scandal when it came to losing over 4 billion with the cut! On the other hand, no De Villiers resigned in protest. Defense Minister Di Paola, on the other hand, was an admiral!

In Italy we are far from even vaguely understanding the political and economic value of credible armed forces. However, we are excellent budgies trained in attributing "fake news" to others.

Public money had been invested to have the best fighters with a huge economic return to the industry, mostly public companies. The return would therefore have been for the Italian state.

The underlying problem of the F35's public image

We entered an international program led by the United States, not others ... For years, the development and construction of the aircraft have received the transparency and the ability to verify stars and stripes: if a program has delays or defects are the government and the Pentagon to highlight it to companies, not only and possibly the press. And when it comes to weapons, in the US, as a rule, we don't joke or gloss over ...

Here, a country where the defects of a vehicle destined for the armed forces are not highlighted with the same American meticulousness, for years drunk with unexpected news and almost stunned by the news, we followed the F35 program believing that the aircraft was crap. On the other hand, if indecent supplies arrive in Italy without anyone breathing out, what to think of a plane that has been complaining about delays, costs and problems for years overseas?

We have allied with the homeland of "It's the print, beauty! The print! And you can not do anything about it! ", only that we are used to silences or, worse, to sordians "Great and abundant Mr. General!", NEVER followed - this is the serious - come on "Instead it is a disgusting!" (v.link).

Even in the light of an excellent aircraft (v.articolo) obtained in specimens less than necessary, the F35 is used as if it were a shame, not a source of pride.

Read what the Minister of Defense Elisabetta Trenta is forced to answer on his Facebook page today ...

THE TRUTH ABOUT F35

Hello everyone, these days I read alleged articles or blogs that accuse us of having proceeded to purchase new F35.
They are falsehoods!
And these falsehoods are those who dispense them for their own ignorance (I do not blame them after all, it is not a fault, but I invite them to read and study the documents) or to manifest bad faith.
But let's get overwhelmed by bad faith: it is surprising that members of the Democratic Party are wandering around and on the web statements stating that the M5S is buying new fighter bombers.
Do you know why? Because the 13 and 14 lots have been committed precisely by the Democratic Party!
And do you know when they did it? Three months before the elections, knowing that they would never have won.
This is the truth, the cards speak (here they are: https://dod.defense.gov/News/Contracts/Contract-View/Article/1503297/).
Now, I am working - with a great sense of responsibility also towards the employment induced and the sector of the Italian companies involved in the project - to try to bring order into the chaos that have left us.
But this is the point: I work, they vain.
We pass the hand and go forward.
Soon I will tell you the solution that we have identified and I will do it in the most transparent way possible.
Also because it is very clear, I have nothing to hide. If there is anyone who has something to hide, today, he sits among the opposition desks.
Long live the Armed Forces!
Long live Italy!

The question about the F35 - regardless of position, party / movement to which one belongs or political sympathy - is simple: “do we still deserve Alberto Sordi” or do we want to become a serious country?

(photo: US Air Force / still from "The Great War")