Home Recommended Publishing Considerations on the parade in Beijing for ...

Considerations on the parade in Beijing for the seventy years of communist China (today, rich and market) 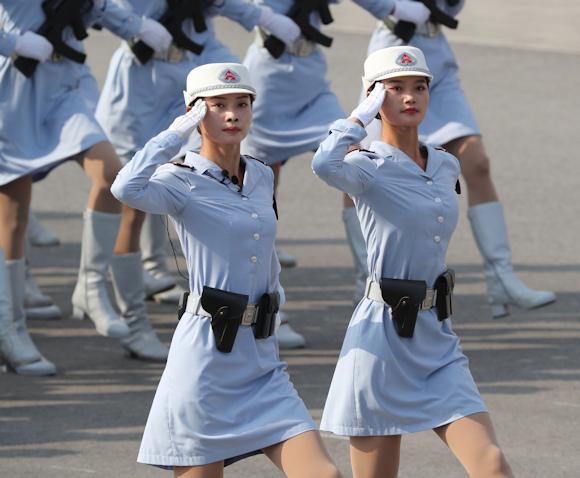 While the West messes with Greta Thunberg and makes itself be said in the face how ugly and bad it is, China celebrates seventy years from the seizure of power by the communist party and puts the figure of the new Mao at the center, as never before. , Xi Jinping.

The reader who knows a bit of Asian history is not surprised by China's growth over the last four decades: for twenty-one centuries, between the death of the first emperor Qin Shi Huang (210 BC) and the first opium war ( 1839-1842) China's economy has never been less than a fifth, sometimes even a third, of that of the entire planet. The civil wars and the infamous Maoist government had diminished so much wealth: today, the Dragon has returned and is even far from its true potential, if we think that - with the same purchasing power - the current Chinese GDP is as good as that of the United States and Japan combined, but still less than the 20% of the world1. A similar argument could be made for the Indian subcontinent, but this is another story2...

But let us return to the parade that has glorified the man who in himself is the Secretary General of the Chinese Communist Party, President of the People's Republic of China and President of the Central Military Commission.

The press in Italy has been wasted in comments on the muscular strength test, on the grandeur of the event and on the demonstration of unity and determination of the Chinese leadership. 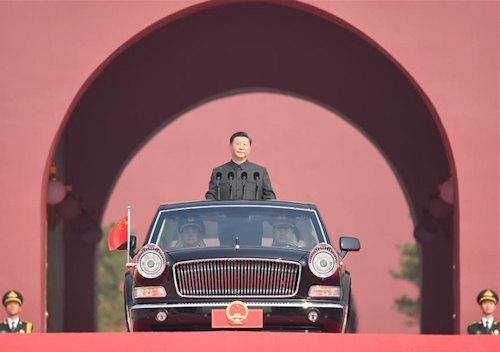 Hello beauty! Did you sleep well?

Did you only realize now that this is not a carpet seller, or a rich fool?

That when he came to Italy to be censured by the yellow-green government he was not the "friend Ping"3 but "the master of the masters"? Indeed, it is the actual master of the world's first economic power, the man at the center of the world's most powerful censorship and mass surveillance system, the world's second-largest investor in armaments4, the one who pulls the levers of over twenty trillion dollars between state banks and sovereign funds, of the actual master of the economies of two-thirds of Africa, of the leader who fights with the USA the greatest trade war of all times etc.

Here, we keep in mind the Chinese power and its strategy of enslavement, because there is the risk that the world will split again and we are forced, given the weakness of our political-economic leadership, to make a choice of field, per se against nature (in the sense of "against our nature as Italians", brought to compromise and mediation as a nation of traders).

What is the point, then, of being amazed by such a power test? Better: to whom does this amazement benefit? 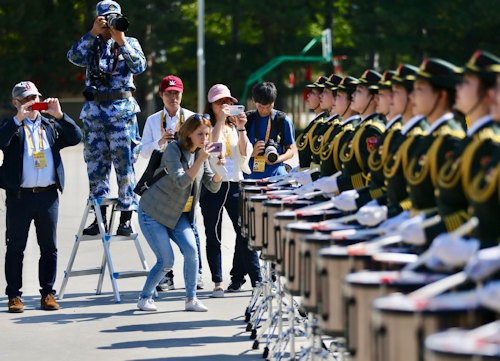 The magnificence of the Forbidden City was studied, like the event of the day before yesterday, to impress foreign ambassadors and merchants and make them return to their countries to report that the Middle Kingdom is unbeatable. Once again the message arrived to simple minds, to those who wanted to understand it as such.

If you want to be more careful, the Chinese parade must teach us not to be surprised by the display of strength: Russia did it every year, even in the darkest moments of the presidency of Boris Yeltsin. If anything, it must make us understand that the center of the world has shifted: the heart of the confrontation is no longer between the shores of the Atlantic and the Arctic, but in the Pacific.

In short, everything now has a different reading ... What for us is strength, for a Chinese in Taiwan is a threat. What for us is greatness, for an American is the challenge of Prometheus to Jupiter5. What for us is a struggle for rights, for a young man in Hong Kong is the last desperate battle not to be assimilated6,7.

What for us is a trade war, for China it is ... Cabbage, for China it is a big blow, but for Xi Jinping it is really a bad cat, because if the Chinese GDP does not grow, the consensus falls and does not allow to consolidate the seizure of power.

For this reason, a nice parade is really convenient ...

2 The crisis of the Indian economy is more ancient: for almost 17 centuries the two giants had contended the primacy among the economies of the world, producing between half and two thirds of the riches of the planet.

3 Words of the current Foreign Minister Luigi Di Maio, who then perhaps had not begun to study English. And he had no one on his side to advise him on Chinese names ...

4 The Chinese budget is less than half that of the US, because they do not have to project their military power globally, but it is anyway

5 In the shoes of the god they put themselves ... The idea that China has overcome them in economics does not touch them.

6 In short, he would also live in a political regime blocked like Singapore, but certainly not in a pluto-communist dictatorship.

7 The reader will think: the umpteenth pseudo-democratic revolution sponsored by the Americans. Well, from 40 centuries the strongest states are interfering with the weak ones. So the world goes, if you like ...