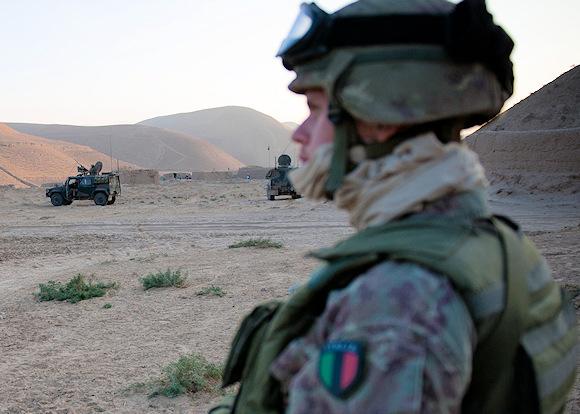 Never, as this year, does the anniversary of September 11 take on a celebratory value, but also a mocking one. On that date Islam, which until then had fought a limited war, struck the American Empire to the heart, revealing to the whole world a weakness that no one, before that date, had dared to do.

President Bush, in front of the New York firefighters, the true heroes of 11/XNUMX, promised that America would take revenge and that the people behind that horrific attack would pay for their gamble for life. So it was. That declaration of war, however, did not concern only the United States, but also dragged old Europe into the conflict which, divided as always, participated in the "retaliation" against Afghanistan and Iraq.

Political motivations, strategic errors and false "weapons of mass destruction" have now fully entered contemporary historiography. Thousands of words have been spent on American incompetence, the brutality of terrorism and Osama bin Laden, the sheikh who was once on the Agency payroll.

Since that day, the "Global War on Terrorism" has undergone a tragic evolution, which has brought weapons and bombs even to European soil: France, Belgium, Germany, Spain had never suffered the ruthlessness and madness of an attack sucks. In a single moment, the whole world changed its way of life, its habits and started to wade away as - incredibly - the governments realized that the terrorists had already lived in their country for several years. From this discovery the various campaigns against radicalization started, as if words and a few more benefits could have erased in one fell swoop, a hatred had too deep roots.

The armies of half the world found themselves on Iraqi and Afghan soil, authors of a war that deserved to be fought, but whose value is still the subject of debate today. Too early to judge: Allied planes fleeing Kabul are a clear warning to anyone who dares a conclusion.

Twenty years of war in a land where empires have always shed bitter tears: the Americans thought the Taliban were like the Iraqi army, but they were wrong. The Western belief in exporting democracy has irremediably shattered against a solid, millenary wall made up of rites, traditions, beliefs and superstition. History teaches it.

Today, therefore, we find ourselves remembering September 11 in a different form because everything that was triggered by that day has vanished into thin air, lost in the deafening silence of a people left to themselves.

For years the coalitioned forces have witnessed, with tears in their eyes, the landing of the military coffin, wrapped in a flag. Years in which a generation of soldiers knew firsthand the effects of a new war, for which many armies were not prepared. The same soldiers who, a few days ago, gathered around the slopes of Kabul intent on doing their duty, but with a bitter taste in their mouth.

The democratic armies fled, amidst the dust and thousands of corpses caused by the Shahid, immediately labeled as terrorists of the Islamic State.

Many dwell on the photos of the incredible arsenal left to the Taliban who wasted no time in dressing up with the costumes of Western warriors, even forming a special body complete with an Oakley, M4 and 5.11 cap. Irony or an irrepressible desire to look like an evolved army for a moment?

Behind the declarations, the grotesque staging and the theater of a Taliban government that immediately declared itself "new" and ready to dialogue, there is much more. The many who have not managed to set foot on a C-130 know this well.

On 11 September 2021, where the Twin Towers once stood, the usual ceremonies of condolence will be held, now emptied of their meaning. The only ones to persevere in a sensible memory of that tragedy are those who sacrificed their lives by climbing the stairs of those two monsters of steel and concrete: the 343 firefighters, policemen, port authorities, paramedics who, even today, do not they manage to remove the layer of dust and death from the skin.

The soldiers? As always, they are required to "die" out of duty, pursuing a just cause, fighting in the illusion of always being on the side of those who do good. In the Italian case, our military has represented a fundamental pawn of a non-existent foreign policy, unable to express any decisive political line. An experience troubled and constantly targeted by "friendly" fire, coming from a bogus government that not only never knew how to take a stand on anything, but at the first opportunity even denied what the soldiers really did.

It is time for all this to change, but like Afghanistan, this country too seems to have remained motionless over time, with the foolish words of some minister and the tragic habit of always and everywhere denying the value of those who fight.

"The West has grasped the desire to create peace plans that should lead to a solution to the crisis in ...
1585
Read

Dear reader, For nine years Difesa Online has been fighting with its strength together with the help of some readers and sponsors. The...
5387
Read

Last week there was a controversy over the downsizing (decided by the previous government) of the military ...
3472
Read

These days Ukrainian fighters are receiving arms supplies from NATO and other countries of the ...
10005
Read