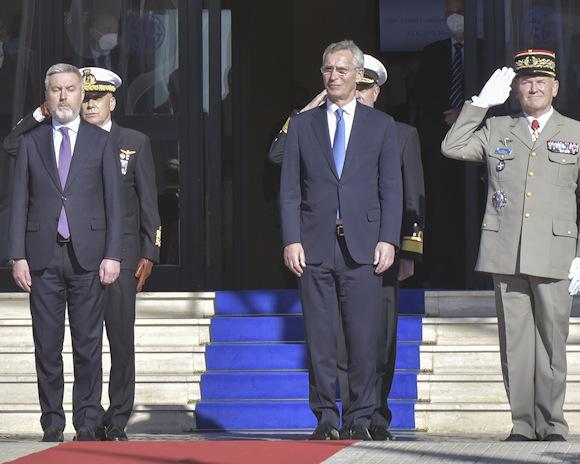 The ceremony, presided over by the NDC commander, General Olivier Rittimann, saw the presence of the NATO Secretary General, Jens Stoltenberg, the Italian Defense Minister, Lorenzo Guerini, the Italian Defense Chief of Staff, Admiral Cavo Dragone, of the chairman of the NATO Military Committee, Admiral Rob Bauer and other top Alliance authorities.

Over the past 30 years, the Alliance (as mentioned in theinterview with the dean of NATO Defense College) has been able to change skin numerous times to adapt to a constantly evolving world. This ability today translates into paying attention to the next inevitable "challenger": China.

The challenges are multiple and infinitely complex: they range from cyber ones to the revolution of hypersonic vectors (see episode Defense ON AIR), by economic levers (by the way, in Italy economic warfare is taught as beyond the Alps ???) to those of information.

In such a framework, can anyone still define the operational borders of the Alliance as “North Atlantic” today?

Is the cyber world an intranet or can attacks be and are (!) Brought from anywhere on the planet?

Are vectors that can hit the entire globe in a few minutes a distant problem or ours too?

Doesn't the monopoly of resources and raw materials indispensable to new technologies have global geopolitical and military effects?

Are the news you read accessible only in Italy or also in Antarctica?

During the first day of the celebrations, despite the busy schedule, iGeneral Rittimann (France) and Admiral Bauer (Holland), have reserved time for the press (in the video from minute 29). 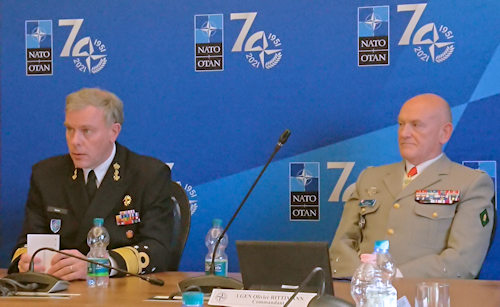 We asked Admiral Bauer how to speed up response times to strong countries leadership, by an Alliance with 30 members to be agreed.

"It is not at all simple. Because if you don't perceive a threat, you don't face the problem!

If you live in a country like Israel, you understand the dangers every day and every day you find new ways and technologies to respond.

I come from Holland, a land far from these borders and very rich. As a result, some Dutch people even wonder why military spending.

Participation in NATO involves mutual aid in the event of aggression: if Estonia were attacked, the Netherlands would send its military to help and vice versa.

This aspect of the Covenant needs to be constantly remembered. So far we have succeeded".

We (provocatively) retorted if move the NATO Defense College to Israel would help the perception of the dangers ...

"We can't because it's not part of the Alliance! However, we can learn a great deal from them in terms of agility, adaptation and cooperation between the scientific, industrial and military worlds. In Israel there is a constant flow of personnel between the aforementioned worlds, consequently mutual understanding is easy.

We cannot copy an entire system, compulsory conscription, for example, is present in some countries but absent in others, however their ability to introduce new technologies quickly must be an example ". 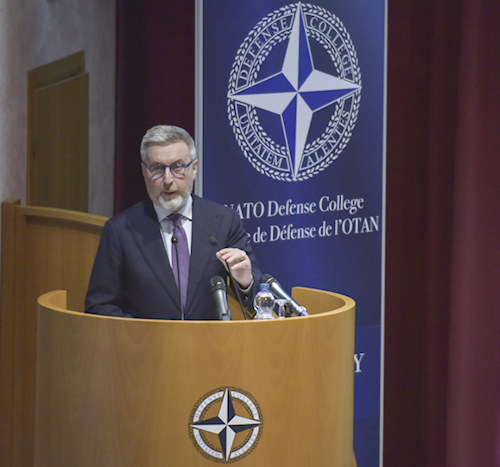 Shortly before the meeting with two senior officers, the Minister of Defense Lorenzo Guerini, representing the Italian government and defense, had intervened with the following words...

"È with great pride that we celebrate today the 70th anniversary of this prestigious institute, which Italy has the privilege of hosting. It was the foresight and strategic vision of General Eisenhower that assigned the College the function of preparing the civil and military leadership of NATO. Since then, the institute has made an essential contribution in training generations of officials and managers for the benefit of our Alliance, whose human capital è one of the resources to keep it vital, adapted to the times and changing scenarios of the security context. "

We would like to understand what the "strategic vision" or perhaps the "perception" of defense and threats by Italian politics is. The same one that - before the Draghi government - spread red carpets just for China ...

Who knows if (after years from prima "interview request") will the Minister of Defense Lorenzo Guerini ever be available, as was the president of the NATO Military Committee, to answer (four-eyed) to some questions from Defense Online?

"The West has grasped the desire to create peace plans that should lead to a solution to the crisis in ...
1497
Read

Dear reader, For nine years Difesa Online has been fighting with its strength together with the help of some readers and sponsors. The...
5356
Read

Last week there was a controversy over the downsizing (decided by the previous government) of the military ...
3469
Read

For over a month the news concerning Fincantieri, the most important shipbuilding group in Europe, ...
13759
Read

These days Ukrainian fighters are receiving arms supplies from NATO and other countries of the ...
9991
Read

The Italian rhetoric of "with all the problems that exist, this is not the right time" is electorally understandable but ...
1950
Read

Russia can only win given its superiority. This mantra - self-evident for the historical mission of ...
7791
Read

For almost a month, Italy has been facing its worst nightmare: the word "war". For historical reasons that term is ...
8432
Read

Let's take a deep breath and try to analyze the events and the harbingers of the ongoing War in a way, to ...
8883
Read

On Wednesday, March 9, the news that Russia intends to transmit to the OPCW, the Organization for the Prohibition of ...
12368
Read