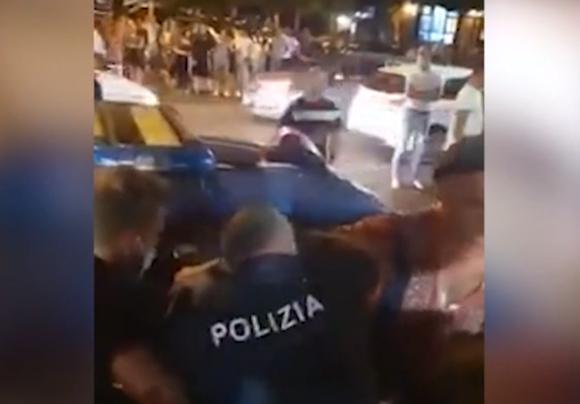 Are still alive in the eyes of common sense, the absurd images that have described theassault by a group of boys to the policemen who, on the evening of Saturday 22 August last, had intervened in that of Marina di Carrara (v.link), apparently to arrest another young man who, drunk, was blocked during a fight.

Images, the aforementioned ones, that have made the tour of Italy and that have led the police chief Gabrielli to call the commissioner of Massa Carrara to express to him and to the agents all the solidarity of the police itself: "I can only underline the great professionalism and competence shown by the agents who did not react to provocations, highlighting balance and moderation, exemplary behavior in the management of public order". However "I feel a strong concern for the climate of intolerance that has been registered towards the work of the police in recent times in various Italian cities"1.

Words, however, that did not satisfy one of the major police unions (the SAP - Autonomous Police Syndicate) which, through its secretary, Stefano Paoloni, wrote a long letter addressed to the director general of Public Security, published in its own Facebook page2:

“Mr. Chief of Police, what happened in Marina di Carrara in the last weekend is particularly serious. A large number of young people, without any hesitation, prevented our colleagues from carrying out their duty, using violence and inciting the crowd present.

The authority of the police forces and their legitimacy to operate has been too often questioned and exploited by those who do not care for the good of the country and our citizens.

But what is worse, those who have responsibility for the security of the country, in most cases, do not adequately support the work of the police, legitimizing in some way the entire anti-police party.

For years, as SAP, we have been asking for more functional guarantees, to ensure that all security operators are better protected and can carry out their mission effectively and safely.

In November 2019, during the meeting with the Prime Minister, Giuseppe Conte, in the presence of the Minister of the Interior, the commitment was made to set up a table to identify adequate legal protections for FFOO operators; almost a year later, nothing has yet been done and no other initiative to protect and guarantee personnel has been taken.

After the serious events of this weekend, we read in the newspaper La Nazione, statements attributed to you, where you congratulate the professionalism of your colleagues and are pleased that they have remained calm.

Mr. Chief of Police, from the Director General of Public Security, we would have expected anything but. The colleagues were certainly good, this is out of the question, but they risked exponentially and not due to their physical safety. For example, the crowd was not at a safe distance from the work of their colleagues, so much so that with great ease, someone could have slipped a blade between his ribs.

If colleagues have chosen not to use force to protect their safety, it is because they have probably preferred to put their own physical safety at risk rather than risk
media pillories, long criminal trials and the exploitation of the anti-police party.

Mr. Chief, don't just tell us good when we get them. We need tougher rules for those who use violence, outrage and resistance to a Public Official; you need suitable tools such as taser, undershirt, bodycam, oleoresin capsicum for one greater security; clear operational protocols are needed; adequate legal protection is needed for facts relating to the service; in short, adequate professional guarantees are needed.

Furthermore, it is necessary that those who have institutional and political responsibilities, without any distinction of color or ideological belonging, support and legitimize the Police, vice versa silence or distancing legitimize behaviors such as those of Marina di Carrara.

Mr. Chief of Police, I invite you to be the bearer of the requests of the operators of the Police Forces towards the Minister of the Interior and the current Government, so that initiatives are urgently undertaken to protect those who wear a uniform and work for the safety of the Country.

Otherwise, if the appeal were to remain unheard and no concrete initiative was taken, we would be obliged to make our voices heard through a broad and strong mobilization in the streets of our country.

Personally, I can only agree with the content of this letter which, with calm and respectful tones, but very firm and decisive, intended to denounce, in an exhaustive manner, a dramatic situation in which our police forces, accused, find themselves , now, even for the slightest movement that, in a normal arrest operation, can lead to physical contact with the offender and, perhaps, to the application of some immobilization technique which, often times, is also for the safety of this 'last.

A country, ours, where episodes of real outrage (from mockery to real physical resistance, to active offense) against policemen, carabinieri or traffic police (see, always recently, precisely, what happened in Rome) are more and more frequent, and to which it is necessary to react with words, on the part of those in charge, who are not afraid of being harshly condemned and with a cultural approach that addresses and defeats the drifts to which we have arrived, according to which the mainstream, or part of it, now automatically takes the side of the alleged villain and, therefore, against the work of the "good guys".

Having established that, even among them (law enforcement), there may be those who are wrong and that the latter must be the first to suffer the related legal consequences, however, it is not possible to reach the opposite extreme in which these men have to be afraid of being able to carry out their work, which - I would like to remind you - is, above all, to protect the community: therefore, a prompt and harsh condemnation is expected for this and other similar facts, also by the current Minister of the Interior, Lamorgese.

If this does not happen, there will be many - I am convinced - to take to the streets next to them, as announced by the SAP secretary himself, the undersigned (yes, you can learn it). Because, with them, the democracy of our country is at stake, in the name of which, too often, now, some think of leading to anarchy. It doesn't work like that, likely to somebody's chagrin.

Unfortunately, the cases of soldiers and members of the Police Forces whose ...
3173
Read