Home Recommended Military law The "green pass" in the military: a little ... 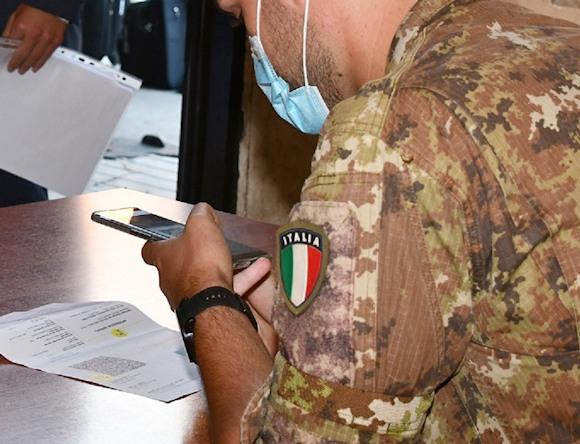 As is known, the provisions of Legislative Decree 15 September 2021, n. 21, concerning the "green pass".

Taking as reference the circular of the Army General Staff of 12 October 2021 (M_D E0012000 REG2021 0204213), this article aims to provide some clarifications on the matter, especially with regard to military personnel and police forces.

1. What is the scope of the green pass rules?

The "green pass" rules apply to all workers, including military personnel, with the exception of the personnel excluded or exempted from the vaccination campaign based on suitable documentation to be shown as proof. At the time of access to the workplace and therefore to the military facility, each interested party is required to show, upon request, the "green pass". By "military structure" we mean everything that is included in the surrounding walls, including collective service accommodation.

You can get the "green pass":

- the outcome of vaccination (with the first dose, after 14 days and up to the second dose; with the second dose, from the moment of inoculation up to its entire period of validity);

- the outcome of healing certified by covid-19 (valid for 6 months, extended to 12 in the case of vaccination).

3. What are the duties of the commanders?

Commanders are required to ensure the implementation in military structures of the provisions contained in Legislative Decree no. 127/2021.

In pursuit of this purpose it is necessary:

- define the operating procedures for verifying possession of the "green pass", also by arranging staggered entrances and checks following entry into the facility;

- identify the personnel in charge of controls;

- give instructions on the use of the forms attached to the aforementioned circular;

- ensure that, as required, any data collected in carrying out the aforementioned checks is kept or stored;

- handling communications to CNA-EI for unjustified absences of personnel without a "green pass", for the purposes of the consequent salary cuts.

4. Which è lo status of staff without a "green pass"?

Personnel without a "green pass" are considered unjustified absent (and cannot be placed in smart-working) until the presentation of the certification request, pursuant to paragraph six of art. 1 of Legislative Decree 127/2021.

This means that, for the period in which he is unjustified absent, the interested party:

- it does not accrue any right to remuneration, nor any other remuneration or emolument, however named;

- does not mature ordinary license;

- does not accrue seniority of service, nor is the period counted for retirement purposes;

- the period is not valid for the purposes of specific attributions.

It should be noted that, by express provision of the same sixth paragraph of art. 1 of the dln 127/2021 already mentioned, the aforementioned status it does not entail disciplinary consequences and the right to retain the employment relationship is preserved.

If what has just been said is true, it is also true that personnel without a "green pass" must scrupulously comply with the rules, under penalty of the possibility of incurring not only disciplinary sanctions not immediately linked to the lack of such certification, but also in real military crimes.

It is therefore suggested to those who do not have a "green pass":

- to go in any case on a daily basis - unless otherwise ordered by the hierarchical line - to the military structure to which they belong and to fill in Annex C - "report of operations carried out";

- not to enter the military structure without the certification in question, as they could otherwise incur forced surrender, pursuant to art. 140 of the Italian Criminal Code, as well as in disciplinary sanctions for non-compliance with the duties relating to the grade, pursuant to art. 712 TUOM, and to the sense of responsibility, pursuant to art. 717 TUOM, and moreover in the prefectural administrative sanction of the fine from € 600,00 to € 1.500,00;

- to comply with the order to leave the military structure, under penalty of disobedience pursuant to art. 173 cpmp;

- to be licensed, as far as possible, in order to avoid the aforementioned consequences deriving from status of unjustified absentee (on leave, as is obvious, in fact, the interested party will not be considered as such and will therefore continue to accrue, first of all, the right to remuneration).

6. Refusal to undergo the vaccine: what legal framework?

Certainly, in the light of what has been said, the legal classification of military personnel who refuse to undergo the vaccine certainly appears complex.

The requests for individual self-determination and the protection of collective health find, in fact, an even more difficult balance in the military context, due to the specificity of the context and function.

In the past, the problem has arisen with reference to military personnel who, fit for service, had refused to undergo vaccinations, thus making themselves unavailable for use in missions abroad.

In this regard, the possibility of compulsory treatment was excluded. In fact, the hypothesis of considering such conduct suitable for integrating the crime of procuring infirmity referred to in Article 161 of the Criminal Code was not considered feasible. it can be assimilated to a voluntary physical impairment, a conduct instead specifically punished by the law.

Unlike what is expressly provided for today for the "green pass", however, in the cases mentioned above, the disciplinary sanctioning power of state sanctions, even in its most serious manifestation form, was considered peacefully exercisable by the Administration.

Moreover, the unconditional availability for the service constitutes the necessary prerequisite for the correct fulfillment of the military service and refusing medical treatment without a justified reason constitutes a serious violation of the duty to collaborate in providing the work performance, so that in the past it was also considered possible the termination of the employment relationship.

In this context, with regard to the specific rules aimed at dealing with the epidemiological emergency from COVID-19, we are witnessing a specific and relevant position by the legislator, which prevents a priori, as mentioned, the determination of similar consequences on a disciplinary level. and the preservation of the employment relationship. And this, mind you, not only with regard to the case of those who refuse the inoculation of the vaccine (well being able to hold the "green pass" even those who limit themselves to reiterating the swabs with the prescribed frequency), but also in relation to the case of those who refuse to even undergo a tampon.

Certainly, a choice of field that actually shifts, with regard to the specific matter of the legislation on COVID-19, the axis of the balance between the aforementioned instances, of individual self-determination, on the one hand, and of the protection of collective health, on the other hand, decidedly towards the former, unlike, as mentioned, what happens and has happened in the past for subjecting to other vaccination treatments.

Whether this represents a correct choice or not is not up to the writer to judge it.

For some time we have been involved in the recalculation of pensions in the salary quota, based on art. 54 of the dprn ...
900
Read

Almost daily, in the exercise of our professional activity, we find ourselves facing challenges of ...
625
Read

We do as we did once in school when, preparing the math lesson, we studied the final result ...
2681
Read

Despite constant proclamations by national politics, the European Union has once again proved itself ...
3653
Read

When we talk about wars, as far as it is legitimate to deduce from the news of these weeks, we end up with the reputation ...
6960
Read

Exemption from the anti-COVID 19 vaccine is a very topical issue. The issue deserves to be ...
1427
Read

Unfortunately, the cases of soldiers and members of the Police Forces whose ...
3180
Read