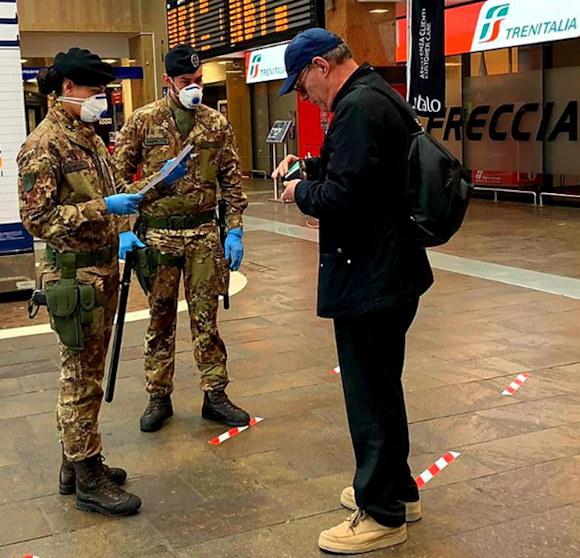 Milan, Bari, Palermo: these are some of the main cities in which the military of the Army are already employed, deployed in these days to help the law enforcement agencies to ensure compliance with the rules laid down to counter the now infamous Covid -19, in particular those relating to travel bans (with related exceptions).

But, the places where they will be called, are destined to grow, as they are increasingly requested, not only by several mayors, presidents of the Region and various authorities, but, above all, by many citizens, who hope to see them soon on the streets, to protect public health standards, in a time of grave danger, not only for Italy, but for the whole world.

With all due respect to those who, perhaps fearing in their heads the danger, for our country, of some dictatorship, perhaps because they are allergic to their uniform, continue to see this possibility as a specter, while ignoring, however, that it is already for a long time a reassuring reality, following the "Safe Roads" operation, active since 2008, from which quotas, already trained, will draw on most of the staff for this new job.

The question that arises is, then, about what tasks the military in question will be called and what their "powers" will be (quotation marks are a must, in order not to raise the alarm in the aforementioned skeptical and fearful).

Well, just like the Safe Roads mission mentioned above1, they will be able, like the police, to carry out a series of acts which, normally, they would not compete with, since their functions are clearly other.

The law of 5 March 2020, n. 13 of conversion of the law decree 23 February 2020, n. 6, laying down "Urgent measures for the containment and management of the epidemiological emergency from COVID-19". 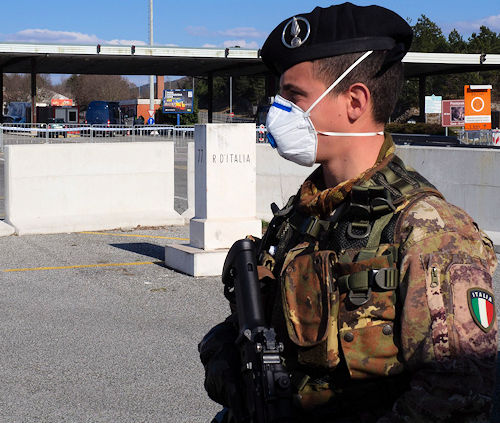 Article. 3, point 5) of the aforementioned, in fact, states that “The Prefect, informing the Minister of the Interior in advance, ensures the execution of the measures using the Police Forces and, where necessary, the Armed Forces, having heard the competent territorial commands. The staff of the Armed Forces employed, subject to the provision of the competent Prefect, to ensure the execution of the containment measures referred to in Articles 1 and 2 is attributed the status of public security agent ".

The central node is the attribution to them of the qualification of public security agents: by virtue of this, they will be able, in essence, to perform checkpoints, identify people to report to the competent authorities and search them, if necessary, naturally remaining the prerogative of the police forces to proceed to any arrests and detentions and judicial investigations.

On the other hand, acquired, consequently, also status of public officials2, may also become passive subjects of some crimes, including those of "insulting a public official" ( art. 341 bis cp), "Violence or threat to public officials" (art. 336 of the Criminal Code), "Resistance to public officials" (337 of the Criminal Code ), being able, especially in the latter case, to use, in extreme cases, not only weapons3, but also the handcuffs, to be understood not as an instrument aimed at "limiting personal freedom" resulting from the arrest (for which, as mentioned, only the police remain competent) but in self-defense against the violent4.

Under no circumstances will the military proceed to arrest?

Without prejudice to what has been said above, it should be emphasized that, theoretically, the soldiers employed pursuant to the aforementioned legislation, could in any case proceed to a possible arrest pursuant to thearticle 383 cpp (arrest by the private individual): in fact, in the cases provided byart. 380 cpp "Every person is authorized to proceed to arrest in the act, when it comes to offenses that can be prosecuted ex officio", being able, moreover, to use both the help of ordinary citizens and, in the case of patrols in the stations (subways, trains, etc.), that of the Sworn Particular Guards (more commonly known as security guards), which, by virtue of art. 139 TULPS, “They are obliged to comply with all requests made to them by officers or public security agents5".

The Italian military, as well as in support of the police, since the beginning of the emergency linked to the Coronavirus, were (were) employed, in reality, also in other areas. The Ministry of Defense, in fact, after taking care of the return of some citizens of the boot from China, making available the bio-containment transport capacities and the structures for the subsequent observation period, sent numerous Army military doctors and nurses , Navy, Air Force and Carabinieri to support various civil hospitals and to date, two field hospitals have been set up in Piacenza and Crema.

Without considering, moreover, the use also of the Military Corps of the Italian Red Cross, currently engaged, in particular, in biocontainment activities.

1 Article. 7 bis of the Law of 24 July 2008, n. 125, establishing the mission in question, establishes, in fact, in paragraph 3, that: "In carrying out the services referred to in paragraph, the personnel of the Armed Forces not belonging to the Carabinieri Corps act with the functions of public security officer and can proceed to the identification and immediate search on the spot of people and means of transport to according to article 4 of law no. 22, also in order to prevent or prevent behavior that can endanger the safety of people or the security of the supervised places, with the exclusion of the judicial police functions. For identification purposes, to complete the investigations and to carry out all judicial police acts, the staff of the Armed Forces accompanies the persons indicated at the nearest offices or commands of the State Police or the Carabinieri. The provisions of thearticle 349 of the code of criminal procedure".

2 See theart. 357 of the Criminal Code according to which: "For the purposes of the criminal law, those who exercise a public legislative, judicial or administrative function are public officials. For the same purposes, the administrative function is public, governed by public law and authoritative acts and characterized by the formation and manifestation of the will of the public administration or by its development by means of authoritative or certification powers ".

3 See art. 53 cp, entitled "Legitimate use of weapons": "(...) the is not punishable public official that the in order to fulfill a duty of their office, they make use, or order to make use of weapons or other means of physical compulsion, when they are forced by the need to reject violence or to overcome resistance to the Authority and in any case to prevent the killing of massacres, shipwrecks, submerges, aviation disaster, railway disaster, voluntary murder, armed robbery and kidnapping. The same provision applies to any person who, legally requested by the public official, provides assistance. The law determines other cases in which the use of weapons or another means of physical compulsion is authorized".

5 Article. 139 TULPS states, in its entirety, that:The surveillance and private investigation offices are required to perform their work at the request of the public security authority and their agents are obliged to comply with all requests made to them by officers or by public security or judicial police officers.".

When we talk about wars, as far as it is legitimate to deduce from the news of these weeks, we end up with the reputation ...
6957
Read

Unfortunately, the cases of soldiers and members of the Police Forces whose ...
3168
Read