Home Recommended Military law Biden hasn't won yet and Trump is not a ...

Biden hasn't won yet and Trump is not a subversive. What a fool if ... 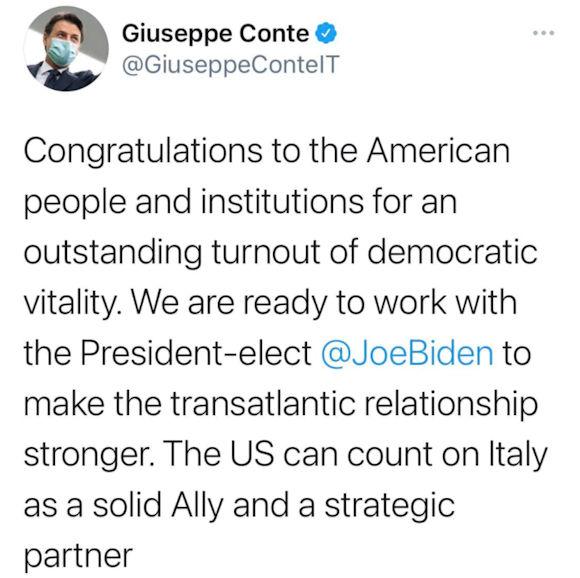 It is now clear: everything and the opposite of everything has been said about the American elections, in a succession of true, plausible or false news, both before them, during and after, in a real information war.

I will not speak here of the possible scenarios that could occur with the election of one or the other candidate, also because, according to the dominant mainstream, if anything, this should only be done for the democratic one, proclaimed winner by the media of almost all over the world, Americans first and foremost, of course, with lots of compliments and congratulations from the heads of state and government, including ours.

On the contrary, I will take a step back, stating something that, perhaps, will be unpleasant to someone or, perhaps, to several: Biden did not win, in the sense that, before proclaiming himself as such, he would have had to wait for the outcome of the legal actions announced. by the president, still in office, Donald Trump and he, in reality, will be until December 14, when the 538 "Great voters" will gather and cast the vote, formalizing, in fact, the victory of the next number one in the White House .

Before that date, precisely by December 8, legal disputes must be resolved, including any appeal to the Supreme Court.

On January 3, 2021, the new Congress will debut, with numbers that, however, in the event of an effective victory for the Democratic candidate, will still constitute a problem, since, if in the House of Representatives they are slightly in favor of the Democrats, in the Senate instead, they are for the benefit of the Republicans.

On January 20, 2021, there will be, therefore, the oath of the elected president who, only then, will concretely take office, as per the constitutional dictate.

So, the question is whether, in the light of all this, it was really appropriate and institutionally correct that Biden hurried to proclaim himself the winner: how to take such a risky step, when the opponent - none other than the still President of the United States of America formally in office - has announced major lawsuits for precise electoral fraud, is, frankly, a mystery.

The obvious consideration is that if the opposite had happened, God's wrath would have been unleashed, to whatever religion it belonged to.

Certainly, what this move seems to have facilitated was to point out the current US President as disrespectful of democratic rules, if not even a subversive.

As if, in short, for someone, staying in a democracy means accepting a defeat (or a victory, seen from the other side) which took place with alleged deceptions, because questioning it would mean not believing in the stability of the system (which one?), in the will of the voters (but if it has been rigged?) and not, instead, to denounce the aforementioned (deceptions), just to safeguard it.

We are talking about the elections which, perhaps, are among the most important in the world, not - to give an Italian example - of a football match, where also, for the entire week following it, maybe one shouts at this or that conspiracy. for a penalty granted or denied, one insults each other and, at the very least, one looks at each other in scorn.

As a further result, according to the entire political world, it is, by doing so, the current tenant of the White House who creates friction and dangerously divides the American people, overheating the minds, and stirring up the crowds: with the opponent who, on the contrary , already announces that he will be the president of all, after having clearly promoted social recomposition after Trump's nefarious incapacitation of not wanting to win it. As if it were the latter who did not want to recognize and legitimize the will of the American people.

But then, one of the two things, tertium non datur: or the tycoon, or his challenger is right.

Because, it is really difficult to believe that the first, to date, not only has not delivered the "concession speech" nor, as a consequent practice, invited and received the second at the White House, but has even announced important judicial initiatives, up to to the Supreme Court, in addition - it should be remembered - in his capacity as president still in office, without more than valid and proven reasons.

If it were not so, in fact, to say that it would come out very badly, both for the global fool and for the pillory that would ensue, would really be an understatement.

And, although in this case, there is a particular situation, perhaps unprecedented, not because of the suspicions raised by the outgoing president, but because of real and very serious accusations (and the difference, also in legal terms, as well as political ones, is not is of little consequence) formulated by the latter ("We all know why Joe Biden is rushing to falsely pose as the winner, and why his media allies are trying so hard to help him: they don't want the truth to be exposed."1), it is certainly not the first time that, after an initial result that seems to indicate a winner, there is then, after the recount requested by the presumed loser, a sensational change of course.

As recalled by the ambassador Giulio Terzi di Sant'Agata, in a post on Facebook, the day before yesterday2, in which, also, the victory of Biden and what could derive from it in the various chessboards of American domestic and international politics is commented favorably, numerous US elections in the past have been problematic, not just those of 2000 fr Bush Jr e Al Gore: Also George Washington he had to wait two months to resolve the disputes. Then adding that For over two centuries, elections in America have been the subject of debates, speculations and formal disputes: the latter have always been resolved through law - founded on one of the pillars of the rule of law, namely the separation of powers - and by independent bodies, starting with the Supreme Court itself. Federal judges embody and express the founding values ​​of the Constitution: this will also apply to the current Court, should it be called into question. All judges, from "originalists" like Antonin Scalia, to "progressives" like Ruth Bader Ginsburg, have responsibly affirmed these values ​​and principles as a guarantee of the linear and fair application of the electoral law: it will not be Trump or Biden who will interpret the laws state in electoral matters, to interrupt or not the count, or to declare a vote valid or not, but it will be the book of US law, democratic, federalist and secular.

Rebus sic stantibus, perhaps it would be necessary to maintain caution, now more than ever, precisely in order not to exacerbate the spirits, and not to accuse Trump of the most varied absurdities, from "being a spoiled child who does not want to leave the game" to, as mentioned, the " to be a subversive ”: the credibility of what many call the greatest democracy in the world is at stake. And, I believe, that with the Americans, many of us would also feel calmer knowing that, in that country, to which more than half the world looks, the elections of its highest office, on which the most varied global dynamics often depend, have taken place in total transparency and correctness. Interest that, to say it all, should be of Biden himself, so that his victory can be celebrated with greater conviction and strength and he himself can carry out his mandate - full of important challenges - without shadows.

Perhaps Trump - some should ask - is trying to do just that. If he is wrong, he will pay the consequences, as mentioned above. But if he is right, he will have done nothing but fulfill his duty, in the name of the people he represents. And, whoever would like to or could happen to him, should facilitate all this, so as not to exacerbate the spirits and to prepare in turn, where confirmed in the victory, to respect that fateful oath. He too would really emerge with greater splendor and institutional dignity. And, even those who would not like him, would probably look at him with a more benevolent eye.

For some time we have been involved in the recalculation of pensions in the salary quota, based on art. 54 of the dprn ...
888
Read