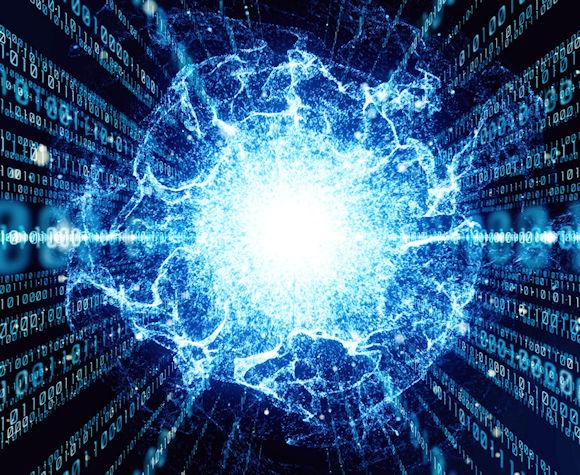 In recent years the term Quantum Computing it is increasingly used also outside research laboratories, engaging more and more specialized figures in the race for quantum supremacy and becoming, in fact, one of the strategic assets in the near future visions of large investors and states.

The continuous search for highly qualified personnel is one of the sensors of this trend, as is the compound annual rate (CAGR) which is expected to increase by 56% in the period 2020-2030 to reach almost 65 billion dollars in 2030 [1 ],

What is the basis of this new technology that makes the sector attractive? What are the current limits? Why are so many nations preparing dedicated strategic plans? What is the situation in Italy?

At the base of quantum computation is the qubit (o quantum bit). It derives from the definition of a completely different physics from how it is perceived in everyday life: To give an example, if in classical electronics we can increase the volume of the radio progressively, in the quantum one we can only "step by step" for how many well defined depending on the physical system in the studio.

The main advantage of the qubit on the classic bit (0 or 1) is that it can be in both states at the same time (superposition principle) and can assume all the initial states at the same time, thus reducing the calculation times based on quantum mechanics. In particular, theGrover's algorithm it allows to find a particular state in a system of N elements with a number of operations equal to the square root of N, while a traditional algorithm would employ N / 2 operations.

This is the great "threat" of quantum computing: If so far the number of elements has been increased to make it increasingly difficult to decrypt a message, the Quantum Computing virtually zero decryption times by simple brute force.

On the other hand, the second quantum property of the qubit,entanglement makes a transmission of messages intrinsically secure at the quantum level: An intruder who also simply wants to read the message without altering it, irreversibly decays the quantum state of the message and makes it unusable both for himself and for the receiver (who therefore knows about the probable access). [2], [3]

Operations on bit and on qubit they are aimed at obtaining a calculation, transmission or storage of data. If this is easy enough by acting with the bit, is more complex with i qubit. But to this complexity is added another factor: the duration of the qubit in its state for a period appropriate to the execution of the calculation or with respect to the distance between transmitter and receiver. This stability is called "consistency".

At present the physical limits mainly related to the maintenance of the state of the qubit in the long term they require basic research activities for the study of phenomenology and at the same time industrial research to find solutions that are increasingly applicable to the macroscopic world in which we live.

The reason for the race is therefore clear Quantum Supremacy, defined in the words of physicist John Preskill in 2012: I proposed the term "quantum supremacy" to describe the moment when quantum computers would do things that classical computers will never be able to repeat, regardless of the usefulness of the operation..

To date it is interpreted by various research centers as the ability to perform more complex calculations than the previous ones in quantum terms, albeit solvable with classical computers.

The real rush to Quantum Supremacy it actually started when the quantum computer was able to carry out calculations for which the classical computer would have taken an unacceptable time (several centuries reduced to a few seconds).

Who is running in the Quantum Supremacy Race?

Almost all the states with advanced technology and strong bases of quantum and nuclear physics are participating in this race and many have included this sector among the short-medium term strategic plans with 2030 as a reference.

Mainly the development of the Quantum Computer is based on two management technologies of qubit: "Ion trap" and "Photon management".

Below are the last three years of the competition:

In 2019, Google claimed to have achieved this goal thanks to its own Quantum Computer Sycamore (with 54 qubits) able to solve in 3 minutes a calculation that a classical supercomputer would solve in 10.000 years.

In 2020, the University of Science and Technology of China (USTC) announced that it had achieved supremacy with the photon-based quantum computer called Jiuzhang (76 qubits). With this system, the USTC claimed to have been able to solve in 200 seconds a calculation that would have occupied the best supercomputer in the world for a few billion years.

In 2021 (September 24), China with the USTC announced that it is still leading the game thanks to the Zuchongzhi processor (66 Qubit) which is declared to be 100 to 1000 times more powerful than Sycamore.

The support of individual nations or transnational funds is, on the other hand, essential to be able to compete or at least not lag behind with this new technology. Many nations or joint initiatives have been launched and some are at an advanced stage in terms of applications, research and evangelization with many start-up e early-adopters. 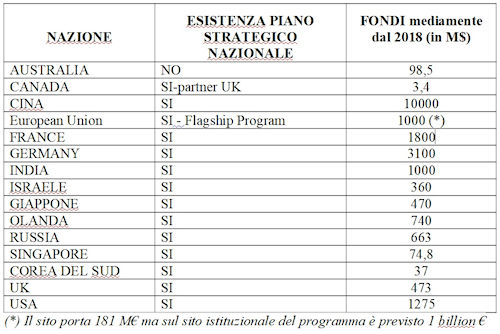 Undoubtedly, beyond political or contextual statements, a gauge of how much a given nation is doing for quantum technology it is the investment made and the funds made available to develop this technology. Based on the Quantum Daily dated 29/04/2021 [4], the situation is summarized in the table.

The values ​​of funds and state support initiatives are an indicator of how strategic this new sector is and the efforts that various nations are making to support research and industry.

Let's see the common European initiatives and therefore the support that Italy can offer.

The first European program dedicated to QC is the Quantum Technology Flagship Program [5]. The initiative, which started in 2018, foresees support in 10 years for about 1000 M €.

Another fund-based initiative horizon2020 and instead quantera [6], where calls for approximately € 40 million are currently envisaged.

So the European Union is also trying to do its part. But how is Italy participating?

Surely with their best researchers hired with salaries appropriate to their specific skills at the most prestigious laboratories around Europe.

But how much is our country doing in terms of projects and the ability to attract part of the funds described in the EU initiatives? Let's see the situation today.

In 2019 the Call quantera it financed 12 projects for a total of 12,5 M € and of these Italy received 1,27 M € by participating in 8 international projects of which out of two it acted as Coordinator. The overall financing received places it in third place after France (€ 2,2 million) and Germany (€ 1,9 million).

A new Call quantera is currently open for 2021.

Relative to the Quantum Technology Flagship Program, Italy participates through the CNR which coordinates national activities [7] and also supports other projects horizon2020.

From what emerges, Italy has the potential to compete together with valid European partners in the race for Quantum Technology applications (also in consideration of the fact that highly technological companies have local R&D and production offices and consequently it is also hoped in terms of by Quantum Supremacy). This is confirmed by the strategic vision that the NRP (National Research Plan) 2021-2027 has highlighted. Italy has, for example, an optical fiber infrastructure capable of supporting quantum communication. In fact, theItalian Quantum Backbone (IQB) is like a 1.850 km long fiber-optic highway (today unique in Europe), therefore, it can actively contribute to the development and make possible tests for secure quantum communication. Our country, as far as sensors are concerned, can be extremely competitive in a rapidly growing market (in the same PNR it is mentioned that "The global sensor market is worth more than 200 billion euros, with an estimated annual growth of 10% for the next 5 years". Truly impressive and constantly evolving numbers; however, there are increasingly evident problems of coordination and aggregation of resources.

As highlighted by Prof. Cataliotti, director of the National Institute of Optics at the National Research Center (CNR), and by Prof. Calarco, director of the Peter Grünberg Institute, in Jülich in Germany, in the recent article published in Nature [8 ], Italy needs a political effort and involving SMEs and large industries in order to really participate in the development of this technology. Action that the PNRR is also recently trying to recover by distributing a total funding of € 1600 million between the 9 future centers of excellence and aggregation of universities-research centers-industries and where the National Center for quantum technologies and advanced materials is included. , photonics and optoelectronics (obviously it is still a becoming ...).

An exhaustive presentation of the potential that Italy can put in place in the cryptography sector in collaboration with other European entities is the Quantum-Secure Net project, described in [9], [10], [11]

The hope is that finally there is a real all-Italian aggregation point for the Quantum Technology with a return both in scientific and applicative terms that confirm the GDP projections, the employment impact and the infrastructural strengthening that the PNRR hopes for.