July 25, in Rome the temperature is always higher, and not just that of the weather! A few days ago the government fell, today it seems that it is the turn of the Revenue Agency. On social media, news, half rumors, denials are chased ... "The Agency has been hacked ..."

The Revenue Agency declares "With reference to the news that appeared on social media and picked up by some press about the alleged theft of data from the tax information system, the Revenue Agency specifies that it immediately requested feedback and clarifications from Sogei Spa, a fully owned public company by the Ministry of Economy and Finance, which manages the technological infrastructures of the financial administration and which is carrying out all the necessary checks ".

Sogei states that "There are no cyber attacks or data stolen from the platforms and technological infrastructures of the Financial Administration".

Who is right? As usual in Italy you don't understand anything!

Yet the best informed say they have seen the files of the file system, organized by user, with personal documents, identity cards, passports ... Is it possible that in 2022 there are still those who organize data in this way? Why not a database?
But is it really data from the Revenue Agency?

But anyway, this is the situation: 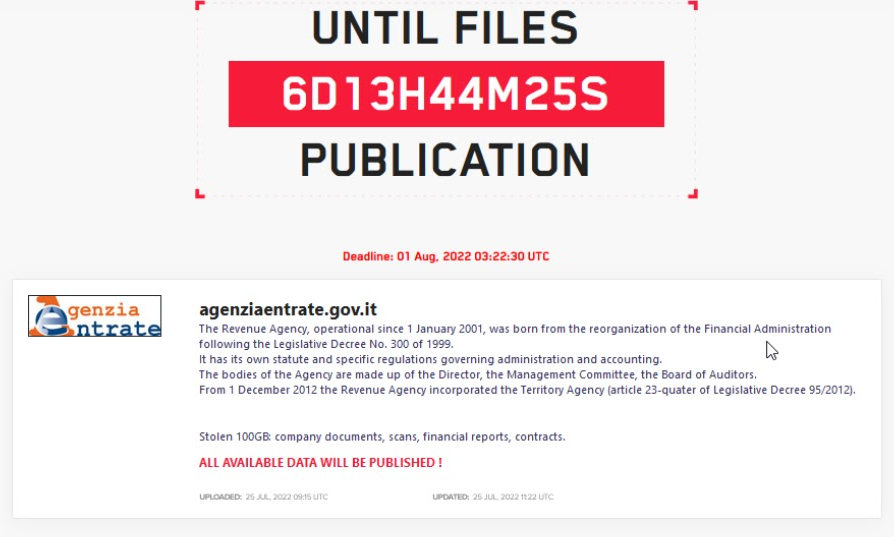 Unfortunately, the worst must be assumed: that is, that LockBit has actually hacked the Agency and is in possession of the data.

LockBit asks for a ransom, under penalty of publication of the data within five days.

Now let's try to consider some possible courses of action:

Unfortunately I have run out of hypotheses, but the questions remain:

Unfortunately, whatever one can say will not help bring things back to the moment before the accident. Yet sometimes one healthy prevention, correct information and training of personnel and the activities of bug bounty e pentesting they can help.

But you need to know what we're talking about ... and that's not always the case!

Some time ago, for science fiction lovers, films called "Terminator" were released in which a robot was capable...
15
Read