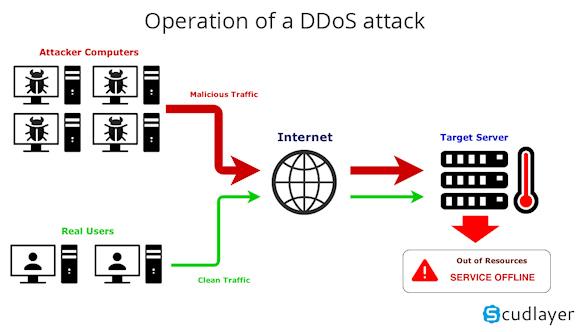 It may seem strange but in our hyper-connected world, in which we move forward by dint of acronyms and English terms, we do not always dwell enough on the meaning of the words and this can lead to errors.

Let's take for example, but not surprisingly, the acronym DDoS and try to ask ourselves what it means. The full meaning is Distributed Denial-of-Service, which translated into Italian sounds a bit like "distributed denial of service", a truly horrible translation that I will no longer use in the course of this article.

It is actually a type of cyber attack which is nothing more than the evolution of the older DoS (attention, there is no mention of the operating system of the eighties) where DoS stands for Denial-of Service.

DDoS is a type of attack that consists of an attempt to interrupt the normal data traffic (I'm simplifying!) That occurs between a server that provides a service and the users of that service.

Before going on, let's make an example to clarify this once and for all. For example, consider a health services company that offers a food delivery service for sick people who sign up on its site. If an unethical competitor company decides to ruin the competitor's business it could organize actions (attacks) to thwart the execution of the service.

It could do this physically, by preventing vehicles from making deliveries on time, or by stopping them in traffic, or by stealing their fuel or threatening drivers or cooks or anyone on the production line. But if the bad guy has a good hacker at his disposal, then he could also do the thing by preventing customers from reaching the service company's website.

Now, as I said at the beginning, DDoS is the evolution of DoS. In fact, a few years ago our bad hacker would have tried to attack the site of our company directly, trying to create a lot of traffic hoping (and sometimes getting) that the site of the service would no longer be able to respond to requests from other users. .

Nowadays to drop a site that renders services requires many more concurrent users (i.e. many users who try to connect at the same time) and to create large amounts of traffic, many devices connected to the internet (distributed) are used but are controlled by a single point. These malicious "networks" are called botnets and are at the root of modern DDoS attacks.

This is what you need to know about DDoS.

You may wonder, but then why did you write "DDoS and viruses" in the title of the article? What is the relationship between DDoS and computer virus?

Well, to be clear, they are two different things.

To make a comparison with the military world, DDoS is an attack technique, like a frontal assault, an ambush or an aerial bombardment. The Virus is instead a weapon, like a bayonet, a submachine gun or a thermonuclear bomb!

Finally, The fact that DDoS and Virus are two different things does not mean that they cannot be used to achieve a common goal.

To return to the military comparison, a frontal assault can be conducted using different types of weapons. A DDoS can be performed using a botnet created by infecting devices with Trojan Horse, Viruses and / or others malware.

If you want to see an example of a DDoS, you can take a look at how theattack Mirai some time ago.

- What is a distributed denial-of-service (DDoS) attack? | Cloudflare

- DDoS Attack: What Friday's Massive Internet Outage Was All About (futurism.com)

With this short article I will try to answer the question that was asked to me a few days ago: "How much is ...
2827
Read

We have often talked about Artificial Intelligence, but we haven't done it yet from the point of view of those who want ...
1385
Read