Home Recommended Insights Reportage in the Mediterranean aboard the S ...

Reportage in the Mediterranean on board the San Giusto 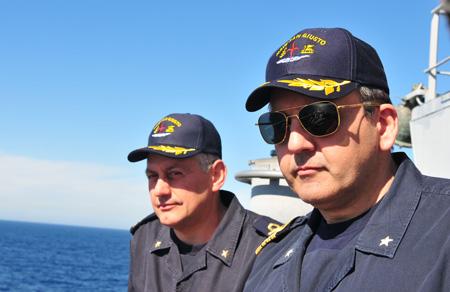 Ten thousand rescued immigrants, about 3300 soldiers of the Navy engaged with 21 units of the same Navy who alternate from time to time for patrolling the Strait of Sicily. To date on the Mediterranean patrolling is entrusted to ship San Giusto, ship Espero, ship Aliseo, ship Libra and Vega for a total of 840 sailors engaged in area between men and women.

These are the numbers of the Mare Nostrum operation that was born on October 18 2013 in order to face the state of humanitarian emergency in the Strait of Sicily due to the exceptional influx of migrants.

We had the privilege of boarding the San Giusto ship, which took command of the fleet, and stay on board for twelve days where we personally saw how the Italian soldiers work in patrolling the waters of the Mediterranean. Very friendly soldiers, each of them with different stories to tell.

On board the San Giusto ship, in command of the operations, is Admiral Rando. He told us that “the operation was launched on 18 October 2013 following the two tragedies at sea on 3 and 10 October in Lampedusa. In reality, the activity of the Navy in the Strait of Sicily aimed at controlling migratory flows had already been underway for several years. So the Mare Nostrum operation is indeed a new operation but it does not represent an absolute novelty for the Navy.

Mare Nostrum has a dual function: it is a military operation of a humanitarian nature but also has a deterrent function and a counter to the illegal trafficking of migrant smugglers. So if we have to talk about the budget of the operation we have to talk about both the rescue operations at sea - underlines Admiral Rando - or about several thousand migrants. With the help of other organizations such as the Coast Guard, we rescued ten thousand people, of which over 8100 were rescued with the ships of the Mare Nostrum device.

Parallel to this primary and necessary rescue operation at sea, there was an action to combat traffickers: the Navy, acting as maritime police, managed to capture two mother ships, ships that were used by traffickers to abandon in the middle at the sea, on dilapidated boats, several hundred migrants. Their crews were arrested. In addition, some smugglers were also identified in the boats who were rescued for a total of 40 characters who are currently subject to the judicial authority. This deterrence operation has been effective but due to the scale of the phenomenon taking place, the size and the push towards the European continent, it is clear that the Navy is only doing its part of the task. The task of immigration management is much more complex.

A total of 21 ships participated in Mare Nostrum.

The ships represent the strength of the Navy: the frigates of the Maestrale class, the patrol boats and the corvettes of the Comforpat command of Augusta, plus the San Giusto, which is currently the command ship and the San Marco, which ended a few days ago. 'operation. These ships clearly rotate because the operation has lasted four months. The crews of these units currently count about military 840. Considering the rotation they will have taken part in the operation over military 3000: a large part of the Navy's operational force. We do not know when the mission will end, it is not our decision, it is a government decision and therefore we will continue to operate until we are asked to do so. 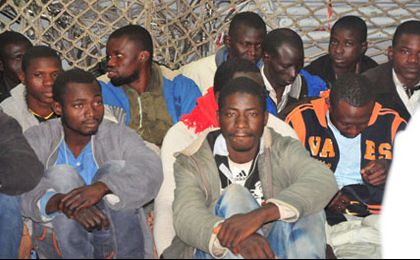 The scenario is clear, we do our part but the solution to the problem of illegal immigration obviously cannot be us. We contribute - the admiral continues - to increase security and save thousands of lives. It is certain that, of the ten thousand people we have seen, several hundred would surely have died: we found them on boats that were sinking, in extreme conditions.

We must prevent these people from being put into the sea in conditions that are very risky for their lives. The traffickers, once they have pocketed the ticket money for the crossing, are not interested in the fate of these people. We do it because we care about it ".

For his part, the ship's captain, vessel captain Mario Mattesi, added: "Being here means the honor of command of a naval unit with a well-trained crew ready to carry out the mission. Possibilities connected to the command and control capacity and to the systems that allow to manage the ships that are part of the device.

We have on board a considerable amount of resources suitable for the activity, such as the current nine boats, including rigid keel dinghies, the Gis, aircraft with medium-long range detection capabilities and last but not least a joint staff put in work thanks also to the assistance of the Rava foundation to face any type of health emergency. The helicopter section makes it possible to extend the range of discovery of the naval unit, to be able to locate in time, before it is too late, boats in difficulty to avoid the worst. Then obviously it represents the long arm, the instrument of deterrence, against the secondary objective of this mission ".

It often happens that in order to understand the origins of a conflict, as to understand where an evil comes from, one must investigate ...
5559
Read

Ukraine is today at the center of a world question capable of determining the rupture of a status that has lasted from the end ...
7088
Read

Valery Vasilyevich Gerasimov was born in Kazan, in what was the Soviet Socialist Republic until 1990 ...
24892
Read

In previous articles we have presented the principles of possible DEW systems and we have dwelt on illustrating and ...
3446
Read

Considering the possible types of direct energy weapons and analyzing the experiments that have taken place in the world ...
6169
Read

Star Wars, the famous film series originally directed by George Lucas, has millions of fans around the world ....
6485
Read

Legends fueled by the mystery surrounding this type of activity revolve around the world of intelligence. The...
2199
Read

The peace operations, in their various articulations, have seen the addition of numerous military personnel ...
4638
Read